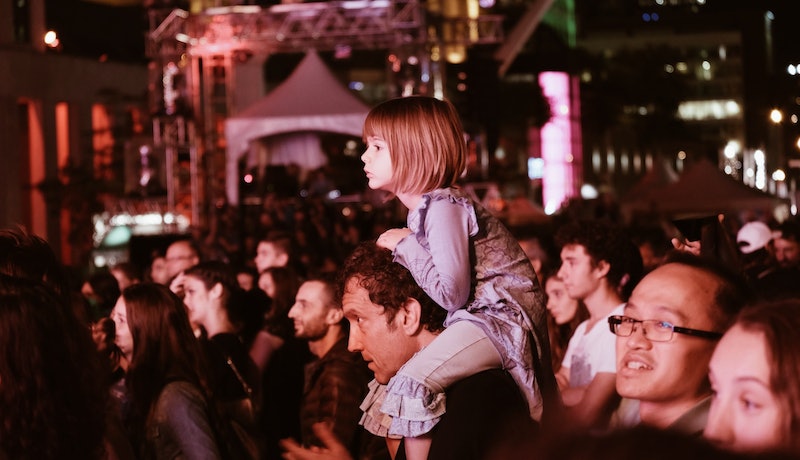 Two minutes and forty-four seconds remained in the Wisconsin versus Kentucky NCAA Men’s Basketball semifinal when our Brittany spaniel, Brice, peeked his head into the den of my childhood home. He had to go out. My father sat on the corner of the couch, and I stood on the other side of the room — stood, for the last eight minutes, too anxious to sit. Brice whined.

“Not now!” my father and I chorused, as if rehearsed, neither of us turning our heads from the television. In my periphery, my mother and boyfriend looked at each other wide-eyed at our dual exclamation, heard in perfect sync stereo.

“That’s my daughter,” my father said from his perch on the pillows.

We were right not to turn away from the game as we watched Kentucky fall in the dwindling seconds of Saturday’s matchup, snapping their perfect season. Brice got his long-awaited walk after the final buzzer.

It is only fitting that I have, in ways, turned into the son he never had.

As much as I am my father’s daughter, I am my mother’s, too, reflecting her love for literature and shoes, and I attribute my in-tandem development to the fact that I am an only child. This makes sense: my parents’ attention was never split, and their influence was equally strong as they raised me. But to my father, that I am female never seemed to matter when he wanted to introduce me to his passions: some of my earliest, most fully formed memories are 10 p.m. sessions combing the pages of the Baseball Encyclopedia at in that same den, well after my mother had gone to sleep; or being tested on the difference between a safety and a suicide squeeze while squinting out at the third-base line at the original Yankee Stadium; or knowing what the “spread” on a game meant by the time I was 9, although my father had never bet once in his life; or promising him I’d name my first born child after St. John’s center Zendon Hamilton as we sat in the uncompromising seats of Alumni Hall. I was 10.

It is only fitting that I have, in ways, turned into the son he never had. Although it happened very early, I am not sure how I, a girl from New York with no affiliation with anything below the Mason-Dixon line, not even grandparents in Florida, became a crazy Duke fan. (Blame my love of the outside shot and the lore of the 1992 NCAA championship, perhaps; whatever it is, I’ve never heard the end of it, especially as an alum of a D-III school in the New England Small College Athletic Conference that I often forget even has a basketball team.)

But from Midnight Madness through the beginning of April, nothing gets talked about as intensely as college basketball, whether my father and I are on the phone between Westchester and Brooklyn, or I take MetroNorth up to watch premiere ACC or Big 10 matchups with him on weekends, which happens frequently. With his tepid appreciation for basketball, my boyfriend is an innocent bystander; he has learned to sacrifice entire weekends to Our Lord and Savior ESPN.

My father’s job in sales takes him in and out of nearly every neighborhood in New York City, often the poorest and least secure, from East New York in Brooklyn to the Melrose section of the Bronx. For the last 25 years, he’s supplied the city’s dollar stores with everything from hair accessories to sewing notions, and now he carries 5,000 items for a company that makes virtually everything.

Although he has moved on from car windows with hand-cranks, my father still refuses to get power locks and windows on the used Toyotas he buys for fear of being a more appealing target for thieves. My mother and I tell him it is 2015, and that he is 68, and he owes himself. He grew up in Jewish housing projects in Flushing, Queens, and his muscle memory tells him to do more with less, so he doesn’t understand what I mean, or he ignores it consciously. It is part of what makes him sometimes hard and uncompromising.

My father is often emotional in all the wrong ways — although never threatening. When he does let himself emote, he can be angry and volatile. I learned every four-letter word I know from him. While I was a teenager growing up in his house, I resented the way he manifested emotion, and our relationship splintered because of it. My punk rock angst could set him off; once, after a quip I’d made, he pushed his dinner off the table in a fit of anger, breaking the plate. For years, I didn’t comprehend why he was so frustrated, so tempestuous; sometimes I took his feelings personally, and in other moments, I couldn’t understand what could be upsetting him so deeply, or why he couldn’t just keep his temper in check.

Although I have grown up, and come to understand that the nature of emotional complexity means we cannot just control ire like twisting knobs on a faucet, my father still carries with him burdens I do not comprehend. I have learned that depression runs within my family, and his childhood was not one that fostered neither exploration nor expression of struggles. Coming to see this has helped, but what has probably made our relationship easiest is our 29-mile buffer. Instead of fearing the volatility of permanent proximity, my father and I can see each other in the situations we choose.

We are eye to eye in a way that we have never before been.

Watching basketball with him is one way I have come to understand my father as more human — or someone whose emotions I can contextualize. I feel the couch shake between us when he forcefully slaps the leather pillow as Frank Kaminsky misses an uncontested three from the corner, and also I wince. I can’t blame him for throwing out one of the four letter words when Wisconsin doesn’t get the Flagrant 1 call they deserve — because I do, too.

Here, with the game on, all senses heightened, he is emotional, but so am I. Here is a conduit for his intensity that I understand, because I mirror it (regardless of whether it’s behavior of which my mother approves from either of us). Although it doesn’t justify the harshness of which I spent so much of my teens fearing and resenting, as I watch him emote in a situation that makes sense — at least to me — he is no longer impenetrable. We are eye to eye in a way that we have never before been.

All season, my father has watched every moment of Wisconsin basketball, swept up in the current of Kaminsky’s reign. On Monday night, he’ll be yelling at the television, as usual, for Bo Ryan’s squad to take down the freshman force of Duke. As much as I am my father’s daughter, there will be no love lost between us come tip-off; Coach K’s programs are my holy grail, and I’ll probably be standing the entire 40 minutes, jumping up and down in my studio apartment, disturbing my downstairs neighbors. Because it’s a weeknight and I cannot come up to his house, my father and I will ride phone lines between Park Slope and Mamaroneck all night — and, as usual, there will be much to talk about.

As of this writing, the game is a pick, which means our odds of coming out on top are the same. It seems right that neither he nor I is at an advantage, at least with Vegas calculations — once again, basketball has put us on the same level.

More like this
14 Scary Campfire Stories To Tell Your Friends
By Charlotte Ahlin and Kaitlyn Wylde
10 Ways To Be More Empathetic To Your Partner
By Raven Ishak and Lexi Inks
Think Your Partner Is Cheating? These Tarot Cards May Confirm Your Suspicions
By Kristine Fellizar
The 19 Best Tweets & Memes About Bisexual Awareness Week
By Lexi Inks
Get Even More From Bustle — Sign Up For The Newsletter