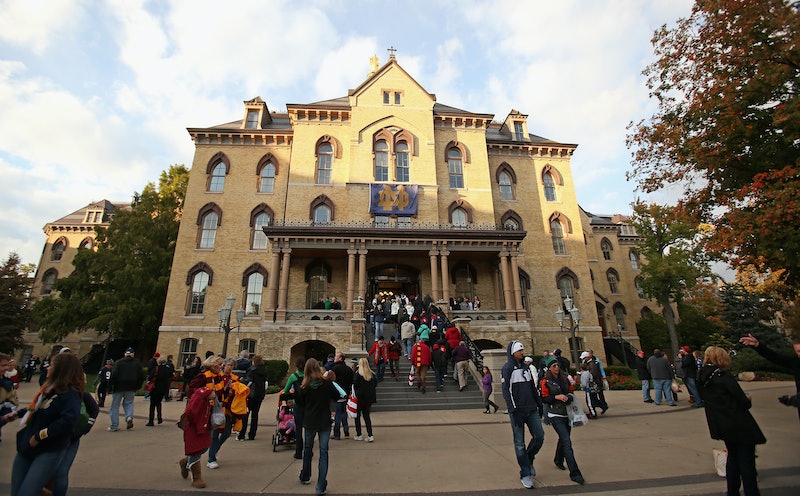 Students beginning their illustrious college careers this year only have 2.9 percent more to complain about than last year's students: Public, four-year college tuition rates have hit a 30-year low this year, with the average tuition rate 'only' increasing by about three percent. The 2.9 percent increase, compared with increases of 4.9 last year and a whopping 8.5 percent the year before, really isn't so bad. It's only $247 on average increase compared to last year. But what speaks to the larger problem here? A whopping one-third of Millennials also say they regret going to college in the first place because of their student loans.

"This [news] does not mean that college is suddenly more affordable," says economist Sandy Baum, co-author of Trends in Higher Education reports on tuition and financial aid, released by the non-profit College Board.

Turns out that the slow-down in the tuition increase is actually "tempered" (control yourself, tuition!) by a decrease in federal aid. So tuition's still more expensive and students aren't getting as much help with it as they used to (even though that "help" comes in the form of potentially soul-crushing student loans).

Federal grants almost doubled between the 2008-2009 and the 2010-2011 school year, peaking at $51 billion. But the next year, aid was cut by five billion. This year, aid is expected to drop another billion, thanks in part to the effects of sequestration, which has reduced the amount of federal work-study aid and research grants. Two-thirds of college students depend on federal aid to help fund their education — which might take on a whole new meaning in 2018, when Obama's proposal to tie federal aid to college rankings would go into effect. As Bustle reported this summer:

If the plan is approved by Congress, students who choose colleges that are more highly rated on the financial list would be entitled to larger grants and more affordable loans for school...In the current federal financial aid system, most government funds are granted based on the number of students who attend each institution with little regard for the amount of debt the average student incurs, or how many actually graduate.

"It does seem that the (upward tuition) spiral is moderating," Baum said. "Not turning around, not ending, but moderating."

Ugh. Let's just keep in mind that in 1974-1975, the cost of college tuition was $512 — or $2,428 in today's dollars. Comparatively, the average price of tuition at four-year public universities this fall was about $8,890. Out-of-state tuition also rose at higher rates.

And while all this money is being thrown around, a recent report from CollegeBoard shows that having a college education definitely pays off in the job market. Bachelor's degree recipients working full time earned almost twice as much as high-school diploma recipients in 2011.

So while it's inarguably much better to go to college in the long run, tuition rates keep increasing and less money is available to help students out. Furthermore, supposedly "need-blind" colleges like George Washington University are turning away low-income students, ultimately making public education less democratic.

It looks like cash-strapped students might have to banish themselves to Wyoming and Alaska — those states have the cheapest public four-year universities. At least they'll have done the preparatory reading?

More like this
Scotland's First Period Dignity Officer Has Sparked Backlash
By Darshita Goyal
Which Cast Member of 'Westworld' Season 4 Has the Highest Net Worth?
By Meg Walters
25 Things I've Reduced My Life To, In Addition To WFH In My PJs
By Ginny Hogan
7 Things We Learned From Rebekah Vardy's First Post-WAGatha Christie Interview
By Sam Ramsden
Get Even More From Bustle — Sign Up For The Newsletter