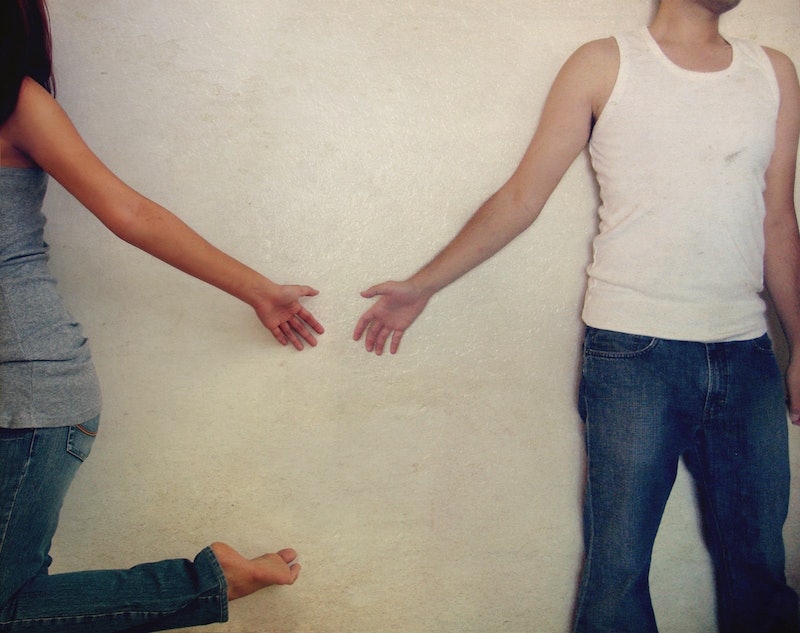 One of Dan Savage's go-to phrases, which has been burned into my memory after years of listening to his Savage Love podcast, is, “Every relationship you are in will fail, until one doesn’t.” It’s easier said that understood, because, really, how do you know that your relationship is going to fail? You're not alone if you find yourself asking, "Will we break up?" It's often a challenge to get some perspective on your own relationship, even if you are someone who listens to sex and relationship podcasts regularly, and you need some signposts to determine if the problems in your relationship are normal or grounds for a breakup.

In The Real Thing: Lessons on Love and Life from a Wedding Reporter’s Notebook , McCarthy draws on her experiences as a weddings reporter for the Washington Post to offer insight into what makes relationships work, as well as what makes relationships fail. After hundreds of interviews with couples, she’s pretty much seen it all, including a lot of relationships that seemed kind of doomed. One hint? If you’re sitting on a couch with your partner being interviewed by a reporter for a major daily newspaper about how much you love each other, and neither of you can explain why you love the other person, “perhaps you should not marry them.”

The Real Thing: Lessons on Love and Life from a Wedding Reporter’s Notebook by Ellen McCarthy, $21, Amazon

There are times when you have to walk away from a relationship. It’s never easy, but it’s usually the right thing to do, especially if you see one of these seven warning signs. If you do, chances are your relationship is going to fail, so it might be time to break up.

He Has A Bad Online Dating Profile

Sometimes, you know a relationship is doomed before it even starts. In McCarthy’s personal and professional experience, there are certain red flags to avoid when looking at a potential date’s online profile. These include anyone whose primary photo is “even a tiny bit hazy,” anyone who lists their exact salary, anyone who looks “even slightly rodentlike in photos. This never gets better in person,” and anyone “who writes about ‘really being ready to settle down now.’ He’s still getting over his ex.” If you see any of these, bail now.

There’s something a little intoxicating about playing games when dating. It can be flirtatious and fun, and definitely makes great fodder to discuss with your girlfriends over brunch. But playing games when you’re in a relationship is a sign that it might fail. “If you find yourself endlessly worrying about your next move or spending hours on the phone with friends, trying to decode your partner’s behavior, take that as a sign,” writes McCarthy. “You’ve found a partner for playing tag, but not for life.”

Although she couldn’t say anything while on the job, McCarthy was most worried by the couples who claimed they never fought. If you and your partner never fight, that doesn’t mean that you don’t have any problems, because every couple disagrees sometimes about something. Not fighting means not addressing the issues you are having, and if you can’t deal with disagreements in a productive way, your relationship is doomed.

…Unless You’re Fighting Over Email

McCarthy once interviewed a woman in the midst of a nasty divorce who never doubted that the marriage would work, “Even when the woman found that she and her husband could only discuss serious topics and points of contention via email.” That’s a warning sign that your relationship is going to fail if I’ve ever seen one. If you can’t even talk with your partner about your problems, then you should break up. Nothing is less romantic than email, so if that’s your primary method of communication, call it quits.

You Moved In For Cheaper Rent

Living together before marriage doesn’t necessarily mean that the relationship is going to fail, but cohabitation “can lead to marriage for some couples who might otherwise go their separate ways.” McCarthy talked with a social scientist at the University of Denver who called it “sliding versus deciding.” Couples who live together feel so entrenched in the relationship because of the home they’ve built together. This can blind them to the problems that exist, making them feel like they can't bail on the other person. So when you move in, make sure you’re “doing it for the sake of commitment, not convenience.”

You Feel Guilty All The Time

Just because you have spent months, or even years, with a person, you shouldn’t feel guilty about wanting to break up. McCarthy talked with economist Neil Irwin about the concept of sunk costs, which is maybe the only economic theory to definitely apply to relationships. You’re not getting those years back, no matter what, so don’t stick around because you feel like you’ve made too much of an investment. Feeling this guilt now is only “setting you both up for a much more severe bout of grief in the future. A relationship that hinges on a sense of obligation will not get better. It will get worse.”

Ultimately, everyone wants a partner who makes them feel comfortable, and McCarthy encourages us, “to seek a mate who embodies the qualities of a good pair of pajamas: soft and warm, but loose enough to really let you breathe.” If your relationship is all about fighting, or avoiding fights, or crying, or feeling emotionless, chances are your relationship is going to fail. You’ll know you’ve found the right person when it feels comfortable. Besides, life is hard enough without all the relationship drama. “Find someone easy.”

More like this
20 Things You Should Never Tolerate In A Relationship
By Rachel Sanoff and Kathleen Ferraro
12 Ways You're Sabotaging Your Love Life
By Teresa Newsome and Lexi Inks
The Best Time To Date After A Breakup, According To Experts
By Bustle Editors
Josh Peck Shows Love To Jennette McCurdy After Her Shocking 'iCarly' Revelations
By Radhika Menon
Get Even More From Bustle — Sign Up For The Newsletter