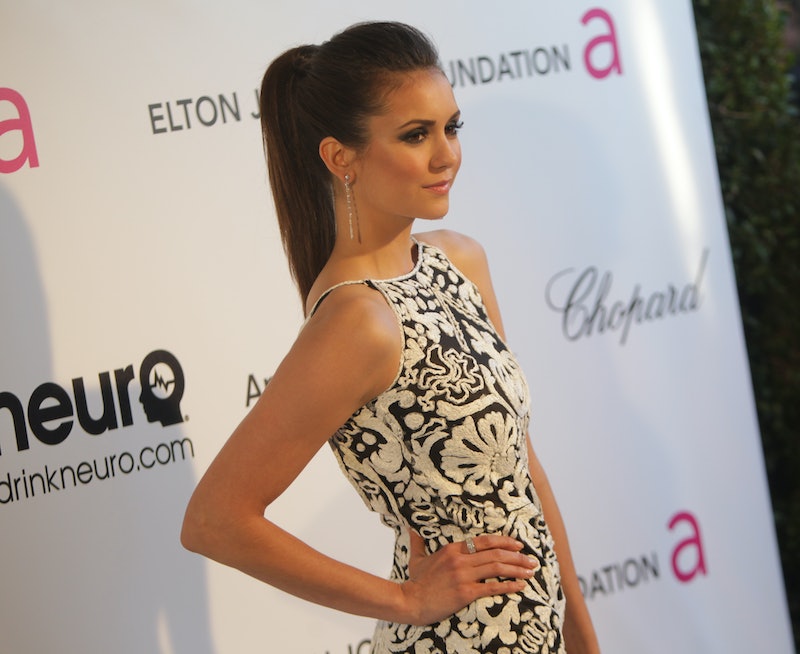 Monday's bloodsucking news that actress Nina Dobrev would be leaving the CW's teen vampire series that helped make her a household name has caused legions of fans to ask will The Vampire Diaries end now that Nina Dobrev has left? Dobrev, who portrays the main protagonist Elena Gilbert, also played two other characters and was involved in love entanglements with brothers Damon and Stefan. The biggest emotional draw of the show was who Elena would end up with. Now, how can "Delena" survive with its pivotal half?

Online, Dobrev took to Instagram to thank fans and explain her decision to leave the show, saying it was time for her to move on.

There's more to come before we wrap this up, and I promise you'll get to hear all about my experiences over the next month as we approach the season finale ... but until then I invite you to hop on the roller coaster ride that is Elena Gilbert's life and join me as I celebrate her and prepare to say goodbye to her — and to my work family — as I move on to the next chapter of my life.

Whether The Vampire Diaries will survive without its leading lady, only next season can tell. But based on the track records of other teen shows that have come before, the loss of a main character doesn't necessarily mean the end of a great run.

As Lucas Scott's silhouette dribbles a basketball with Gavin DeGraw's "I Don't Wanna Be" blasting in the background, the WB (and eventually the CW) set the stage for what would be the life-changing journey that is One Tree Hill. Of the five leading characters that began the high school basketball drama, Lucas and love interest Peyton Sawyer are the only two Ravens that didn't stay for the show's full run. Both Chad Michael Murray and Hilarie Burton exited after season six to pursue other opportunities. The love triangle that was Lucas, Peyton, and Brooke Davis might have been no more, but One Tree Hill survived another three seasons without its leading couple.

Beverly Hills, 90210 was the original teen drama soap that covered — in a primetime slot in the 1990s, mind you — then-taboo topics such as date rape and teen suicide. The bad girl we loved to hate, Shannen Doherty played twin Brenda Walsh for just four seasons before she was written off the show. In a tell-all book Jason Priestly: A Memoir, fellow cast member Jason Priestly said Doherty had a bad attitude on set. The Fox show survived without Doherty, as well as key exits from other characters, lasting a full 10 seasons and inspiring successful spinoffs Melrose Place and 90210.

No surprise, Shannen Doherty gets a second nod on our list. Four years after leaving Beverly Hills, 90210, Doherty joined the cast of the popular witch series Charmed as the eldest sister Prue Halliwell. Doherty reportedly butted heads on set with co-star Alyssa Milano, who played youngest sister Phoebe Halliwell. After just a few years, Doherty's character's death was written into the season three finale, and she was replaced with long-lost half-sister Paige Matthews, played by Rose McGowan. Charmed would go on to become one of the WB's most successful series with eight seasons.

As someone who grew up in Orange County, I can definitely say that yes, life depicted in The OC was as real as a teen soap could get. When producers decided that girl-next-door Marissa Cooper, portrayed by Mischa Barton, would die in season three, fans were left shocked at her tragic death. But Barton's split with the show was amicable. She told Access Hollywood, "My character has been through so, so much and there's really nothing more left for her to do." The OC would last just one more season due to low ratings. But we'll never forget our first summer night at that fated Newport Beach bonfire. "Welcome to the OC, bitch!"

Enter the "real" Orange County. From Laguna Beach to The Hills — and LC to Lauren Conrad — the Southern California it-girl left for Los Angeles to pursue a fashion career and new love without those silly OC boys. After watching her BFF-turned-frenemy Heidi Montag marry the diabolical Spencer Pratt, Conrad gracefully quit the show in its fifth season to pursue other opportunities. Conrad was replaced by her high school nemesis Kristin Cavallari in typical dramatic Hills fashion — will we ever forget Cavallari sauntering down that wedding aisle? The show would last for just one more season.

More like this
There's At Least 1 Major Difference Between The 'Vampire Academy' Book & TV Series
By Grace Wehniainen
Netflix Reveals First Look At Wednesday In The 'Addams Family' Spinoff Series
By Bustle Editors
Kenan & Kel Just Reunited At The 2022 Emmys & Twitter Is Overjoyed
By Grace Wehniainen
What Does Nancy Jo Sales Think Of 'The Real Bling Ring'?
By Arya Roshanian
Get Even More From Bustle — Sign Up For The Newsletter