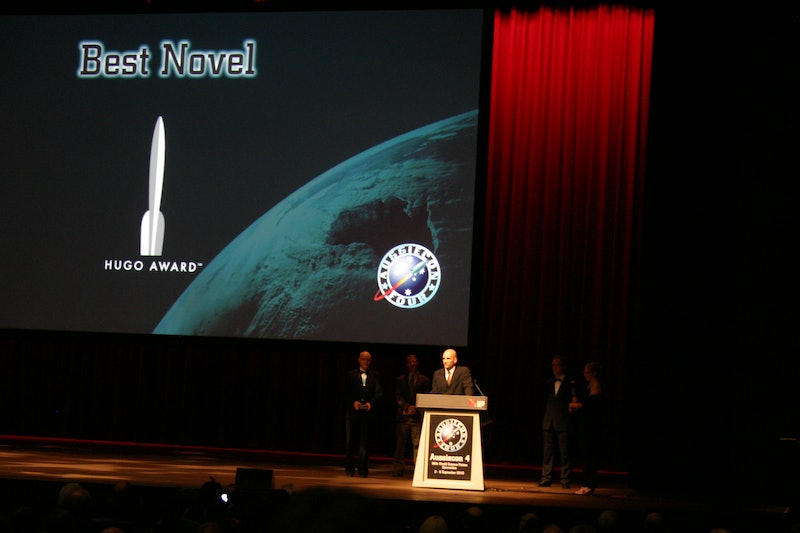 If the science fiction and fantasy literary genre has an Oscars, it's the Hugo Awards. Since the 1950s, the awards have recognized the works of science fiction and fantasy (SF/F) greats, including Stephen King, Kurt Vonnegut, George R. R. Martin, and Michael Chabon. But, if you look at a complete list, you'll notice one thing about the roster of past winners: A majority of them are white men. And this year fans, the media, and the organizers themselves claim there's a conspiracy to rig the Hugo Award nominations to keep it that way.

Here's what's happening: For close to a decade, the Hugos have made strides toward increased diversity, with deserving women and members of minority groups added to the nomination list. (See: Octavia Butler, Ann Leckie, Saladin Ahmed, Nalo Hopkinson, N.K. Jemisin, and Ted Chiang, all of whom, save Butler, were nominated after 2000.) But the 2015 awards, whose winners will be announced in August, have become a battlefield as longtime supporters of the awards allege that two online groups known as the Sad Puppies and the Rabid Puppies tried to subvert the nomination process, apparently to keep the awards mostly white and male — a statement that the leaders of the Sad Puppies — Larry Correia and Brad Torgersen — and the Rabid Puppies — Vox Day — vehemently deny.

The conflict has become so heated that two nominated authors have dropped out of the awards, and some are comparing this year's Hugo nominations to GamerGate, another controversy that exposed persistent biases in a field dominated by white men.

Kevin Standlee, a Hugo Awards committee member, tells Bustle a number of people "who feel very passionately that they have been disenfranchised some way" banded together to try to ensure the awards went to authors and pieces that 1) they like and 2) supported their political statement. "There's some really wonderful people from minority groups who are a part of our community," he says. "It just frustrates me to see criticisms of trying to keep diversity going. I am frustrated to see attacks on diversity in our community."

But Correia, who says he turned down his 2015 Hugo Award nomination so that his presence doesn't distract from the Sad Puppies' mission, insists diversity is not the problem, political correctness is. On his blog, he wrote:

In the long term I want writers to be free to write whatever they want without fear of social justice witch hunts, I want creators to not have to worry about silencing themselves to appease the perpetually outraged, and I want fans to enjoy themselves without having some entitled snob lecture them about how they are having fun wrong.

But what exactly do the Sad Puppies and Rabid Puppies want? When it comes to the former, at least, it's about eliminating political correctness. The Sad Puppies has several hundred members and is led by two male science fiction authors, Correia and Torgersen, who claim that the awards are becoming an “affirmative action” honor and are given to authors and works based on the whether the writer or characters belong to an underrepresented minority group. They say on their respective blogs that their mission is to take the awards back from individuals they refer to as "social justice warriors." Torgersen, who is leading this year's Sad Puppies campaign to do that, wrote on his blog:

The nominees of the ballot at Loncon 3, the name of the 2014 Worldcon (the World Science Fiction Convention where the Hugo Award ceremony takes place), were the most diverse to date, Standlee tells Bustle.

Charlie Jane Anders, a Hugo Award-winning author and the managing editor of io9, saw last year's winners not as evidence of oppressive or excessive political correctness but rather progress. She wrote earlier in April:

To the rest of us, it looked as though science fiction and fantasy were finally catching up to reality — the best stories aren't only the ones told by straight white men.

So, how did this controversy come about? Correia founded the Sad Puppies three years ago because, he writes on his blog, he "believed that the [Hugo] awards were politically biased, and dominated by a few insider cliques." Correia alleges in the blog that the Hugo Awards were becoming biased to the left — so far, in fact, that authors who didn't align with those beliefs were getting shunned from the ballot. So, he began a campaign to get what they call right-wing nominees on the ballot.

In 2015, the Puppies took a more aggressive approach, releasing an entire slate of nominees for all 17 categories. Those nominees swept the competition. The SF/F community outside of the groups responded with outrage, and it was this reaction that Correia says proves his point that the awards favored liberal and minority nominees. Correia and Torgersen argue that they're being accused of the exact behavior they're fighting: trying to make the Hugo Awards fit one specific belief system. Torgersen writes on his blog:

Or maybe just be wholly transparent and call it White American Liberals Con — An inclusive, diverse place where everyone talks about the same things, has the same tastes, votes the same way, and looks at the world through the same pair of eyes.

But the Sad Puppies aren't alone in their quest to change the Hugo Awards' direction. A completely separate right-leaning group with a similar mission, the Rabid Puppies, emerged later, founded by science fiction author Theodore Beale, who sometimes writes under the pseudonym Vox Day.

Day is different from Correia and Torgersen, though, in that Day has made overtly racist and sexist comments — "I consider women’s rights to be a disease that should be eradicated," for example — and was expelled from the Science Fiction & Fantasy Writers of America for them. In 2013, blogging about woman of color and fellow Hugo Award nominee N.K. Jemisin, Day wrote that Stand Your Ground laws were made to allow people to protect themselves "from people, like her, who are half-savages engaged in attacking them." Although he later called the statement half-savage "generous," Day claims he's not a racist or sexist. When George R.R. Martin also called Day racist, Day responded with a blog post insisting he wasn't. When Jemisin called him a "misogynist, racist, anti-Semite," Day responded on his blog:

Jemisin has it wrong; it is not that I, and others, do not view her as human, (although genetic science presently suggests that we are not equally homo sapiens sapiens), it is that we simply do not view her as being fully civilized for the obvious historical reason that she is not.

Correia and Torgersen have since released statements declaring that they are not involved with Day. Torgersen wrote on his blog, "Nobody on Sad Puppies 3 signed up to be Rabid Puppies. We are not Rabid Puppies. Larry and I are not Vox Day."

It was pretty easy for Correia, Torgerson, and Day to get their preferred nominees on the ballot. All members of the World Science Fiction Society (WSFS), which gives out the Hugo Awards, are allowed to nominate authors and their works. Those with the most nominations by the community are selected for the ballot. On their respective blogs, Sad Puppies and Rabid Puppies told science fiction fans to buy a supporting membership online, which can be bought by any member of the public for $40, and vote for the groups' recommended slate of authors. And though, according to Torgersen, the slates included works from nine women and two men from minority groups (out of somewhere around 50 recommendations), Standlee claims it was still an attempt by people of a specific ideology to get certain authors on the ballot who they felt represented them.

Two nominated authors have drawn out of the awards: Annie Bellet and Marko Kloos (who actually removed themselves from the ballot because of the "political dodgeball" they say the awards have become). And a fanzine that was nominated also attempted to do so. Other authors included on the Sad Puppies and Rabid Puppies' recommended slates, such as Matthew David Surridge, have spoken out against their inclusion on the list, though others have voiced their support, including Kary English and Amanda Green. But even George R.R. Martin, of Game of Thrones fame, wrote criticism of the Sad Puppies on his blog:

Call it block voting. Call it ballot stuffing. Call it gaming the system. There's truth to all of those characterizations. You can't call it cheating, though. It was all within the rules. But many things can be legal, and still bad... and this is one of those, from where I sit. I think the Sad Puppies have broken the Hugo Awards, and I am not sure they can ever be repaired.

Although the Puppies have gotten their nominees on the ballot, there's still a big obstacle in their way to a big win. Thanks to the voting process, it will be tough for the Sad Puppies and Rabid Puppies to prevail, though they got the nominations. Authors with the smallest number of votes are eliminated, and it's going to be tough for their nominees to eke through, especially because there is the option to select "no award," Standlee tells Bustle, and people plan to use it.

A "no award" vote indicates that the voter believes there was no author or work in the category who deserved to win a first place Hugo Award. For example, when the Church of Scientology got a novel by L. Ron Hubbard on the ballot in 1987, "no award" received more votes than he did.

The 2015 Hugo Award winners are set to be announced in August at Sasquan, this year's annual Worldcon in Spokane, Washington. Glenn Glazer, vice chair of the WSFS Business and Finance Divisions and co-chair of this year's Worldcon, says he's not worried about the controversy undermining this year's awards. He tells Bustle in a statement:

The Hugo Awards have a nominations and voting process that is transparent and open to all Worldcon members. The nominations this year have not broken the rules or the process. It’s our hope that all members of Sasquan, the 73rd Worldcon, will vote for the Hugo Awards in accordance with their own, individual, preferences. We continue to have faith in the awards, the awards process, and in our membership.

But though there are some women and a few mainstream picks on the 2015 ballot, Standlee says even if they win, those victories might feel tainted by what has happened during the nomination process. Although Correia, Torgersen, and Day might argue that they're investing time, energy, and effort into bettering the Hugo Awards, Standlee says he thinks they're being highly reactionary. "It's hard for me to deal with people whose attitude is we should tear down everything you’ve done, or who just show up and say you should change to suit us." Day says he's not trying to burn the Hugo Awards down, but rather to "defeat the SJWs in science fiction" and "reclaim the genre for freedom of speech, thought, and association," he writes on his blog.

In a blog post explaining the difference between Sad Puppies and Rabid Puppies, Torgersen wrote that he knew the campaign would be controversial and even expressed a bit of remorse. He wrote:

None of us wants to burn the Hugos down. We want the Hugos to live up their reputation as the preeminent award in the combined field of Science Fiction & Fantasy. ... We love this field. We’re sorry to be causing a ruckus that got bigger than expected. We’re sorry people are angry.

It’s unclear what will happen in August. If more authors, particularly prominent ones, try to refuse their nominations or speak out against the controversy, the Hugos might lose the clout they’ve accumulated over their 60-year history. Alternately, the Sad Puppies' apology could be enough to heal the community's wounds and quell further revolt. There's a fantasy many in the SF/F world would love to see realized.