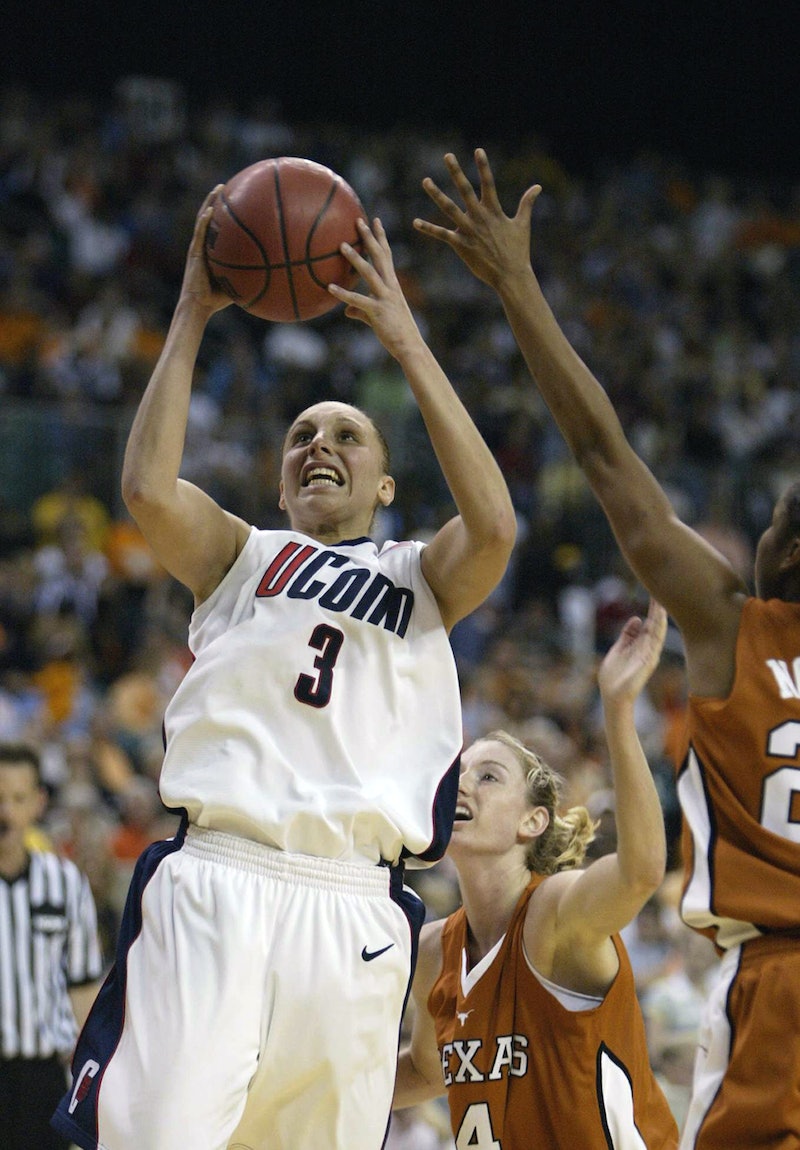 Duke beat Wisconsin and grabbed the NCAA men's national basketball title on Monday, but the season that is March Madness isn't over just yet. The NCAA women's basketball championship game will take place Tuesday night, but chances are, most people won't know — or simply won't care — whether the University of Connecticut or Notre Dame comes out on top. Why the madness and bracket bets don't fully carry over to the women's tournament begs the question of why women's and men's basketball don't get the same attention in the United States.

UConn is one game away from a three-peat, a major feat for any athlete or team, but the buzz isn't there. You can be sure if the same situation was happening on the men's side, there'd be plenty of water cooler talk about their chances. As attractive as a UConn women's wager looked with its nearly undefeated season (though, as Kentucky fans know, it's not a sure bet), basketball fans probably didn't think twice about printing a women's bracket at the beginning of last month. It's all just another reminder of how grossly undervalued women's sports continue to be despite major efforts to increase their visibility.

The sad reality is that until corporate higher-ups decide that women's sports are a lucrative business, they'll always be kept in the shadows of men's sports. Time argues that, with the exception of some equalizing sports such as tennis, women athletes receive less attention — and money — until they showcase skills that are considered as on par with men, feats that are largely considered anomalies. Sure, you could argue that there'd be more money in women's sports if they commanded more viewers, but pumping more money for salaries, promotion, and merchandising would, in turn, help increase their visibility. It's a chicken-and-egg situation.

Consider for a second how much professional WNBA players make compared to their male counterparts. Though women are allowed a maximum salary of $107,000 in the WNBA, the average WNBA player makes about $72,000 a year. The NBA uses a team salary cap rather than mitigate individual salaries, and the average annual NBA salary is $4.5 million. For the 2014-2015 season, Kobe Bryant is the highest paid player in the NBA with $23.5 million.

Perhaps the fault lies in the networks that pay billions of dollars to air men's games live. In 2010, the NCAA signed a 14-year, $10.8 billion deal with CBS and Turner to carry the men's basketball tournament games. The Duke-Wisconsin game aired in a primetime spot on CBS. In 2011, the college athletic association and ESPN extended its TV rights deal to air 24 NCAA championships, including the entire women's basketball tournament, for a reported $500 million. But with 7.6 million American households that don't even have cable or satellite TV, the opportunity to catch the women's championship game on Tuesday is dramatically cut.

Or maybe we're to blame. After all, we're not scrambling to buy seats. The Atlantic reports the WNBA has seen record low attendance numbers in recent years, and the average WNBA game hasn't topped 10,000 people in attendance since 1999. Colleges have resorted to promotional tactics such as, yes, kale-themed games to boost women's basketball ticket sales. The official Twitter account for the NCAA women's basketball said the women's Final Four games had a solid 19,730 people in attendance this year, its biggest number since 2010, and even Tom Cruise was spotted at a game in Florida. But compare that to 72,238 people who attended one game between Duke and Wisconsin, and the number pales.

Women's basketball might not be a must-watch for Americans, but it's more popular overseas, which is why some players, such as UConn alum Diana Taurasi, have chosen to pass on playing in the United States. Last month, Taurasi announced she would skip the 2015 WNBA season after her Russian Premier League team UMMC Ekaterinburg offered her $1.5 million to sit out and rest. Brittney Griner, Baylor University's basketball phenom who was the WNBA's No. 1 draft pick in 2013, earned $49,440 playing for the Phoenix Mercury in her first professional season. After the season wrapped, she flew to China, where she played for the WCBA's Zhejiang Golden Bulls for $600,000, roughly 12 times the rate she was paid in the United States. (By the way, the same year Griner was signed, the Cleveland Cavaliers paid No. 1 draft pick Anthony Bennett $5.32 million for his first season.)

When former WNBA all-star Becky Hammon became the NBA's first full-time female coach last year and joined the reigning champs San Antonio Spurs' staff, headlines hailed it as a "major step" for the basketball association. Rightly so, because dammit, it's hard enough as it is for a woman to make it in a man's world, let alone a woman athlete make it in a man's sport. But I'm still waiting for the day when those kinds of announcements aren't considered groundbreaking or historic, and rather just another day in the sports world.