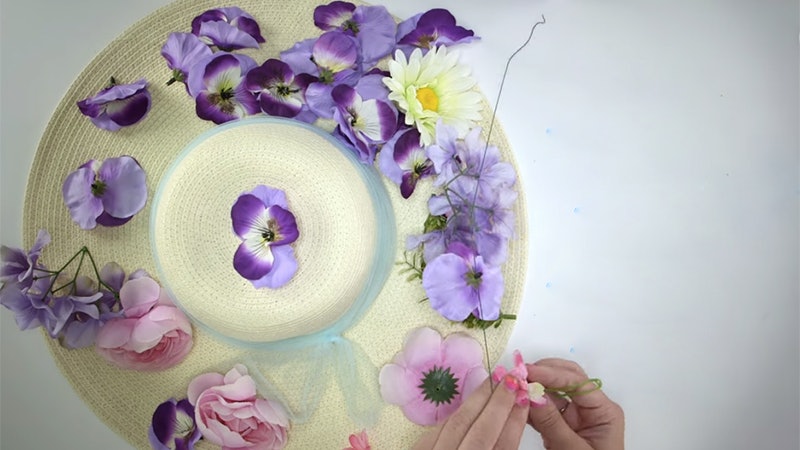 There are really just two major annual events that bring celebrities to the Midwest: the Indy 500 and the Kentucky Derby. The latter is coming up on May 2, so you need to learn ASAP how to make a Kentucky Derby hat, whether or not you'll actually make it to Louisville. The Indy 500 doesn't quite have a dress code, but the Kentucky Derby basically requires attenders wear amazing hats to the horse race. It's an excuse to wear crazy hats in broad daylight, so why not take full advantage of it?

Although it's more work than buying a hat, DIY'ing your own Derby topper has its advantages. The first, of course, is saving money: The hats in the official Kentucky Derby store can run you anywhere from $150 to over $500! Wouldn't you rather save that extra cash to raise your stakes on the horse with the craziest name on the track (which is exactly how I would place my bet)? Most importantly, however, a DIY'd hat will be unlike anyone else's. Nothing could be worse than showing up to your Derby party wearing the same rosebud-and-feather-fascinator as everyone else. So embarrassing.

If you need an idea to beat your fashion rival (because let's face it, whoever's hat is best is the real competition of the Kentucky Derby) take a look at some of these tutorials and try it yourself.

This tutorial has no words, but great background music. It's a little different than most Derby Hat tutorials because it doesn't require any form of glue, and you get to put a bird on it. Surprise everyone this year with a hat style so fly, you could literally fly away.

Sometimes the most memorable hats at the Kentucky Derby haven't even been real hats. If a full-on hat sounds a little too sweaty, try creating a fascinator that you can pin into your hair instead. This is a very easy step-by-step guide that offers super close-up details.

Who better to teach you how to make a Kentucky Derby hat than a real, live Louisville, Kentucky resident? YouTuber Craft E Magee made two hats for this, each for under $25, that are crazy enough to make a statement, but well done enough to look like you bought it at the store. She also incorporates nets and feathers into the hats!

4. A Derby Hat For Everyone

Pre-game for the Kentucky Derby by throwing a Kentucky Derby hat making party. Three designers, Kim Geiser from Persimmons Studio, Nichole Campbell from Petal Pusher, and Jennie Sykes-Schwenk from Jennie Elizabeth Designs, each created their own over-the-top derby hats and share how you can do the same. Although they don't go through how the made each hat step-by-step, they clearly explain how you can, which may allow you to add your own personal twist!

If you want to stand out amongst Lauren Conrad or the Kardashians at the Kentucky Derby, use feathers. Kathy Olliges from Dee's Craft's in Louisville, Kentucky experiments on how to manipulate feathers you can place on your hat. She gets crazy enough to pull out a curling iron.

More like this
12 New Year's Nail Ideas That Are Truly Stunning
By Jordan Murray
Here Are All 703 Outfits Rachel Wore On Friends
By Kat George
Cyber Monday Deals 2022: The Best Fashion Sales To Shop
By Dominique Norman
The Best Black Friday 2022 Fashion Deals To Shop This Year
By Dominique Norman
Get Even More From Bustle — Sign Up For The Newsletter