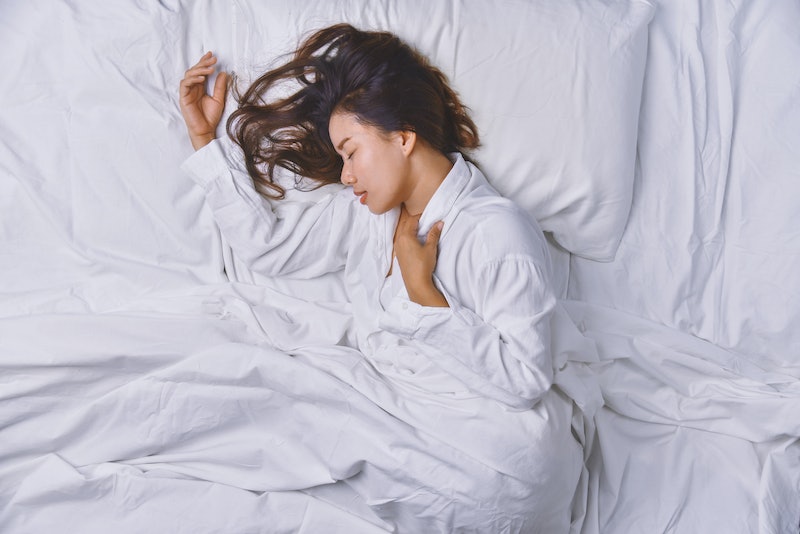 Although often not talked about, Polycystic Ovarian Syndrome is one of the most diagnosed hormonal disorders out there. So in order to clear up some of the confusion that exists around it, Stuff Mom Never Told You's Cristen Conger has taken to YouTube, breaking down some of the most important things you need to know about this syndrome. fact, she says that this is one of her most frequently requested topic requests that she receives from viewers, so I'm guessing a few of you Bustle readers also want to know more about this disorder.

If you're wondering what Polycystic Ovarian Syndrome is, it's a metabolic disorder that results in hormone imbalances that, in turn, cause often painful internal and external symptoms. In order to get a diagnosis, one must have two out of the three of the following conditions: Elevated androgen levels, absent or irregular menstruation, and/or 12 or more ovarian cysts.

Polycistic Ovarian Syndrome or PCOS for short, affects more women than you might think: Between one in 10 and one in 20 women (or five to 10 percent) who are of childbearing age have PCOS, according to the Office on Women's Health. The organization estimates that five million women have PCOS; however, some who are affected are as young as 11, so the syndrome isn't limited to adult women. With PCOS affecting so many women, I'm glad Conger decided to make a video to raise awareness. Not only will it help us stay informed, but moreover, it will encourage us to support the women in our lives who might be suffering from it. To learn even more, check out some of the facts Cristen highlights in her video — and scroll down to watch the whole thing.

Up to 70 percent of people who have Polycystic Ovarian Syndrome are not diagnosed — the majority! One study Cristen cites found that it takes an average of seeing four doctors before being properly diagnosed with PCOS. As to why the syndrome is so undertreated, Cristen points out that the common symptoms can often point doctors to other disorders.

2. Ovarian Cysts Might Not Actually Be Part of PCOS

Despite the presence of 12 or more ovarian cysts being one of the necessary criteria of being diagnosed with PCOS, there's some question as to whether or not the syndrome even causes the cysts in the first place — especially because you don't even need to have ovaries in order to have it. This is why you only need to meet two of the three criteria to be diagnosed, so that the ovary debate doesn't have to determine your fate.

Despite it being hard to actually receive a proper diagnoses, the good news is that this disorder is treatable. While there is no cure, there's a variety of lifestyle options you can practice in order to keep symptoms down.

If you want to learn more about Polycystic Ovarian Syndrome, check out the full video below.

More like this
The 12 Best Air Fresheners For Bathroom Smells
By Amber Petty
The 10 Best Doormats For Cleaning Shoes
By Ileana Morales Valentine
Here’s Your Daily Horoscope For August 8, 2022
By Mecca Woods
15 Genius Storage Solutions For Your Next Bathroom Refresh
By Emma Garza
Get Even More From Bustle — Sign Up For The Newsletter