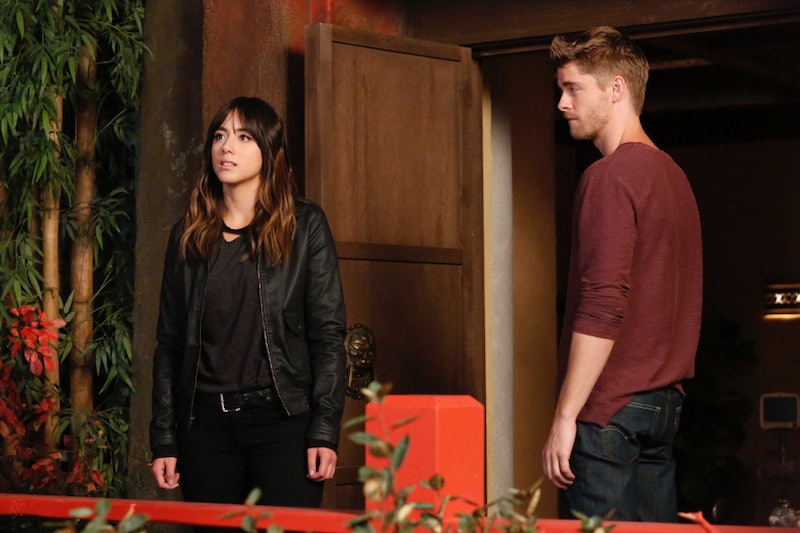 This Tuesday's episode of Agents of S.H.I.E.L.D. will finally introduce Skye to the world of her people, the Inhumans. Joining the cast as an Inhuman named Lincoln Campbell on Agents of S.H.I.E.L.D. is Luke Mitchell from The Tomorrow People — but who is this handsome devil? Could Lincoln be from Marvel Comics, or is he an original character? My theory is that Lincoln Campbell is Hellfire and/or Phantom Rider, a descendent of the Slade family from the comic books. How could he be both? Let me explain.

Other than the ability to wear a red shirt real well, we don't have any idea what Lincoln's superpowers are. However, just like the eyeless inhuman Gordon on Agents of S.H.I.E.L.D. , Lincoln's identity is mostly up to guesswork at this point. Luckily, Marvel Comics may have the missing pieces to this puzzling new inhuman character.

According to the official ABC press release for Tuesday's episode titled "Afterlife," Lincoln will be introduced when "Skye’s journey to control her powers takes a surprising turn when she meets [this] enigmatic inhuman." My interest is piqued, but that's not a lot of information and the way I came to my theory is a bit complex. I'm not the only person who has thought of this theory — you can find Marvel fans on Reddit and Tumblr tossing it out there as well. However, it's all about the journey, so here are the two Marvel Comics characters who could help solve the mystery behind Skye's new friend.

There aren't many characters named "Lincoln" in Marvel comics, but one of them is Lincoln Slade, the Phantom Rider. Lincoln Slade, along with his brother Carter Slade and their descendants Hamilton and Jaime Slade, have all took turns as the vigilante over the years in Marvel Comics.

In the comics, the original Phantom Rider had ghost-like abilities. He could become intangible and shoot energy from his pistols. The Slade family was based in the 1800s and ruled the Wild West — however they have interacted with the Avengers and other modern Marvel characters thanks to immortality and/or time travel. You know, common comic book conventions.

Next, if you look into Skye's comic book alter-ego Daisy "Quake" Johnson you'll find that she was romantically involved with James Taylor James, also known as Hellfire. James is descended from the Slade family as well and has the ability to channel hellfire (think fiendfyre from the Harry Potter series), which he does using a large metal chain. He and Daisy have an intense, tumultuous relationship. I certainly wouldn't complain about seeing some more angst and romance on Agent of S.H.I.E.L.D.

Personally, I think both the emphasis on family history and the fact that J.T. James channels his ability through a device in order to keep it from controlling him makes him a good candidate for Lincoln's alias. They both relate thematically to Skye's struggle to accept her ability and lineage. Of course, we won't know for certain until we see Lincoln emitting fire or walking through walls. Lincoln Campbell may be an original character, but if we're looking for his inspiration, this may be an excellent place to start.