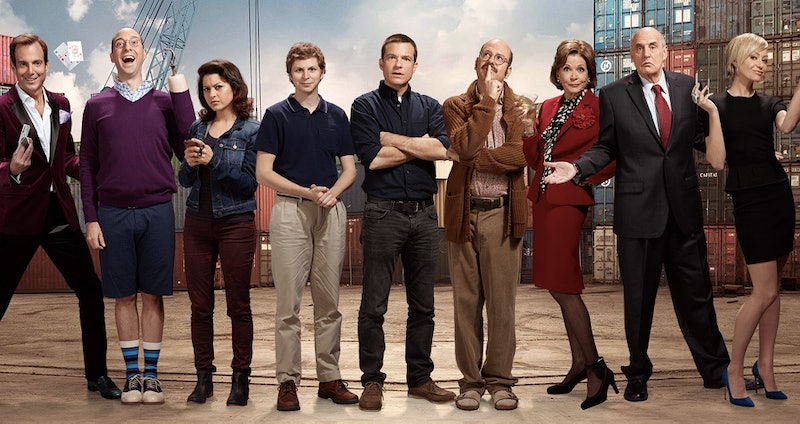 If you consider yourself an honorary member of the Bluth family, get ready to be stoked: more Arrested Development is headed your way. According to executive producer Brian Grazer, Arrested Development will return for Season 5 on Netflix. The series, which aired three seasons on Fox before heading over to the streaming service for a "better late than never" Season 4, will boast 17 episodes in its fifth season. The fourth season, which featured 15 episodes, devoted its main focus to one character per episode, which was the biggest criticism of the first Netflix Arrested Development season — diehard fans wanted to see the entire dysfunctional family in all of their glory. But, hey, at least the whole cast showed up. So will all of the Bluths return for a Season 5, even if they don't spend very much time onscreen? Here's what we know.

Good news: it looks like the Bluths (and Bluth-Fünkes) are planning on returning to Season 5. Will Arnett confirmed Season 5 back in August of 2014, stating that it was just a matter of getting everyone's schedules on track and that he was excited to keep working on the show. It seems that Portia De Rossi and David Cross feel the same way — in their joint interview with Entertainment Weekly in January 2015, Cross admitted that he would work with the cast "forever" if he could, and De Rossi stated that she'd absolutely be ready for another go with the cast.

Jason Bateman, whose character is responsible for bringing the whole family together on the series, is equally as hyped about the potential for new episodes, telling Zap2It that he'd love to return to work with his cast mates. Here are my feelings on that:

Clearly, the actors who play the Bluths like spending time together a whole lot more than the actual Bluth family, and it seems that Arrested Development Season 5 has been put on hold until everyone in the main cast can participate. Of course, that doesn't necessarily mean we'll ever see the cast all together on the screen. With the busy schedules of the actors involved, it could take years before everyone's schedules line up perfectly. That fact might mean that we're in for another season of divided narrative focus, but it's better than no Arrested Development at all, right?