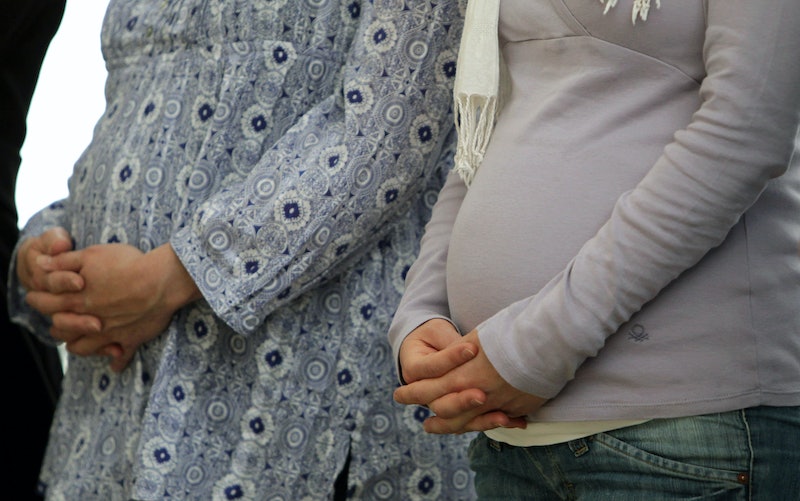 In today’s abortion restriction news, Kansas is back in the headlines. Kansas Governor Sam Brownback signed SB 95, which made the Midwestern state the first in the U.S. to ban a common technique used for second-trimester abortions. The law, which was drafted by the National Right to Life Committee, will be in effect July 1. The bill bans the dilation and evacuation procedure and also redefines the procedure as a “dismemberment abortion.”

There has been immediate backlash from reproductive rights groups, including Planned Parenthood Advocates of Kansas and Mid-Missouri and Trust Women. Julie Burkhart, founder and director of Trust Women and South Wind Women’s Center in Wichita, Kansas, released a statement about the new law on the Trust Women website. For seven years, Burkhart worked for Dr. George Tiller, the Wichita-based abortion doctor who was gunned down in the foyer of his church. She wrote in the statement:

I am disappointed and concerned by Governor Sam Brownback’s decision to sign SB 95 into law today. SB 95 will disrupt the trusted physician and patient relationship by prohibiting physicians from using their sound medical judgment to decide what is best for their patients.

In 2014, the South Wind Women's Center opened in Wichita in the same location of Tiller's clinic. South Wind offers abortion care for women less than 22 weeks along in their pregnancy.

According to the Guttmacher Institute, by November 1, 2014, several restrictions on abortion in Kansas were in effect. Just a sample: Under the Affordable Care Act, the state only covers abortion when the woman’s life is endangered, and a woman must undergo an ultrasound before receiving an abortion. And though Kansas is often one of the first states to come up in abortion law conversations, it is not the only one passing such restrictive laws. According to Mother Jones, at the end of 2014, at least nine states began to introduce abortion restriction laws for 2015.

In 2014, one of Kansas’ neighboring states, Missouri, enacted one of the most restrictive abortion laws in the country, which requires Missouri women to wait 72 hours before getting an abortion. Missouri only has one Planned Parenthood that offers abortion services — in St. Louis. The 72-hour restriction slaps a whole host of problems on Missouri women, especially those who cannot afford travel and housing expenses at a clinic that could be hours away from where they live.

And now, in a recent week of unfortunate news for Indiana, the state is under a firestorm for having convicted 33-year-old Purvi Patel of feticide and illegally inducing her own abortion. Patel’s 20-year sentence to prison has sparked a conversation about access to care when a woman’s pregnancy or health is at risk. In July 2014, Patel went to an emergency room in South Bend, Indiana, to seek help for heavy vaginal bleeding, told her doctors she might have miscarried and thought the fetus was no longer alive. Although a toxicologist testified that there were no abortion drugs found in Patel's blood samples, she was still charged with feticide and neglect of a dependent, according to RH Reality Check.

The new law in Kansas is only another dialogue in a continued string of commentary on state governments’ policing women’s bodies. Wendy Davis' filibuster against archaic abortion laws proposed in Texas became some of the most discussed news of the summer of 2013. But several states are doing their best to be the next Texas — Indiana, Kansas, Missouri. The list goes on.

Other bills to ban the dilation and evacuation procedure have been introduced in Oklahoma, South Carolina and ah, yes, Missouri. In the year of the 42nd anniversary of Roe v. Wade, America seems to be celebrating by going backward on the timeline of progress.