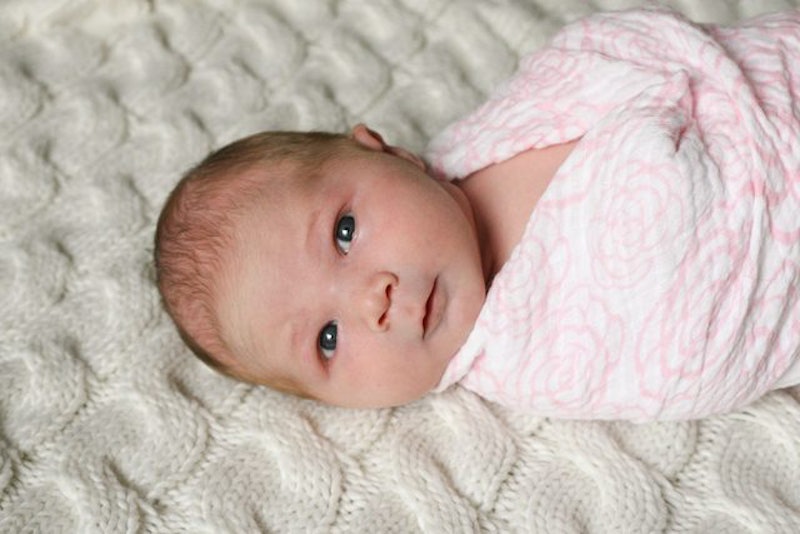 If you love babies, the Internet, meet-cutes, or all of the above, this one's for you. Meet Tiny Imgurian, the baby who owes her existence to Imgur and serious contender for the most 2015 baby to be born this year. So how does one baby come to perfectly encapsulate the power of the Internet in the modern age? Let me tell you a little story about her parents.TerdFerguson and sashisushi, a.k.a. Nate and Sasha IRL (as the kids are saying these days), met on Imgur back in 2012 and bonded over a "shared affinity for lurking, laughing and upvoting," according to Imgur's community blog. Chatting turned into Skypeing turned into real-life dates, according to Cosmpolitan, and you can guess what happened next. After less than a year of dating, the couple married in 2013 in an Imgur-themed wedding, complete with a surprise Imgur cake and the attendance of their closest Imgur friends from across the United States. "I am amazed at how much I love our Imgur family," Sasha told Imgur not long after the wedding. Can I get an "awwwww?"But Nate and Sasha's internet-powered love story doesn't end there. As of March 16, 2015, the "first Imgur baby" was born, and holy moly is she cute.

She may be the product of an ultra-modern love story, but Tiny Imgurian, whose real name hasn't been released, has the same interests and hobbies as any other baby. According to the Imgur community blog, she "enjoys naps, poops, and lying on Sasha's stomach. Or sometimes all three at once."

Is Tiny Imgurian fated to fall in love with a Reddit baby, thereby bringing peace and harmony to rivaling Internet platforms worldwide? I'm not saying obviously, but... obviously. But that's far in the future. In the meantime, congratulations to Sasha and Nate! As for Tiny Imgurian, keep on with your cute self.

More like this
The Best Time To Date After A Breakup, According To Experts
By Bustle Editors
The “Teenage Dirtbag” Trend Is TikTok's Latest Nostalgic Obsession
By Meguire Hennes
How To Use The Whatnot App To Thrift Vintage Items
By Emma Carey
12 Cheeky Instagram Captions To Use When You Haven’t Posted In Weeks
By Emma Carey
Get Even More From Bustle — Sign Up For The Newsletter