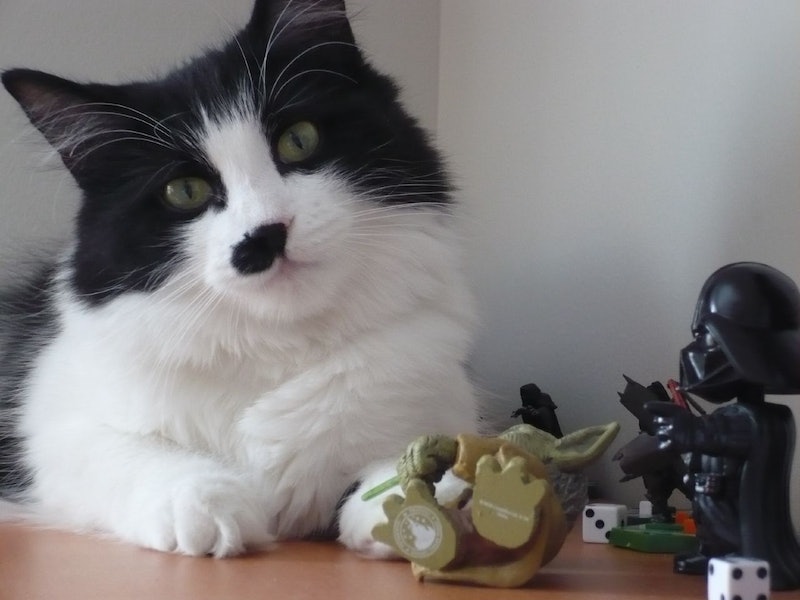 Cats have a well known tendency to do everything from ruining your drapes to knocking over all your picture frames and from lying on top of your laptop every time you want to get work done to refusing to move. Sometimes it's kind of hard to explain why we keep these entitled, obnoxious creatures around — but according to science, the reason your cat breaks things isn't just because he or she is a big kitty jerk. They're just trying to practice being a good hunter. You know, so they can proudly present you with even more dead birds. Isn't that nice of them?

We've all seen cats deliberately push things off of tables or nudge them from shelves onto the floor, but it turns out this isn't just your cat trying to ruin your stuff. According to HowStuffWorks, it's very common for feline hunters, including the cute but deadly house cat, to toy with their prey — and destroying your beloved knickknacks gives them a way to practice this behavior. As Dr. H. Ellen Whiteley explains on the site, "Your cat's instincts tell her that paperweight or knickknack could turn out to be a mouse. Her poking paw would send it scurrying, giving her a good game (and possibly a good lunch)."

Cats are smarter than that, though, so eventually, they'll probably figure out that paperweights and cups are not actually mice. But that won't stop them from continuing to knock things over. Whiteley goes on to explain, "Once a cat learns that knocking something to the floor will bring humans on the double-quick, she may actually do it on purpose to get your attention, particularly if she feels that a meal is long overdue."

In other words, if your cat doesn't think you're paying them enough attention or if you aren't feeding them to their liking, they'll decide that anything that isn't nailed down is fair game.

So how do you stop your cat from continuing to send all your stuff hurtling towards the floor, leaving you with a mess to clean up and a lot of broken stuff? Well, the best way to deal with the problem, according to HowStuffWorks, is to give your cat other things to do. If your cat has other things to play with — and other ways to enact their fantasies of being a tiger hunting for real prey — then they will be less likely to ruin everything.

Fortunately, the Internet is in love with cats (not even goats could dethrone them), meaning there are bound to be some resources for what cats might prefer to be doing. So what are some other things cats might like to push around? Well, you can't pick all of these up at PetCo, but according to the Internet, here are some ideas.

See, now this is much more productive. No broken knickknacks and the baby is asleep!

Why does the cat want to push the car? Does it matter?

It gives a whole new meaning to the term "cat's cradle." And it saves you from having to clean up anything. At least until they inevitably break the thing.

Is it part of a crate? Some sort of toy vacuum cleaner? Whatever, as long as it isn't one of my mugs.

Does this count as kitty karma? I'm going to say that it does.

More like this
25 Things I've Reduced My Life To, In Addition To WFH In My PJs
By Ginny Hogan
How To Use The Whatnot App To Thrift Vintage Items
By Emma Carey
The “Teenage Dirtbag” Trend Is TikTok's Latest Nostalgic Obsession
By Meguire Hennes
12 Cheeky Instagram Captions To Use When You Haven’t Posted In Weeks
By Emma Carey
Get Even More From Bustle — Sign Up For The Newsletter