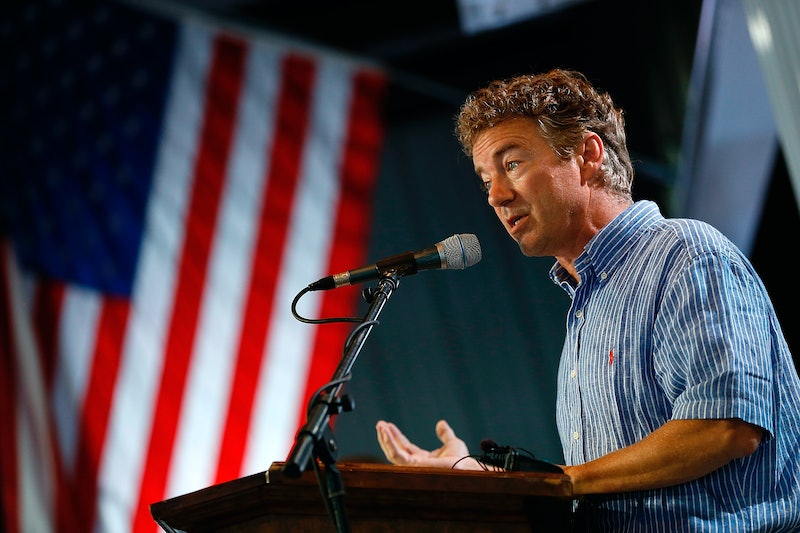 When you picture a politician what do you see? Probably a suit and tie. But there's a man challenging this social norm in Washington: Rand Paul — and his jeans. Not only is he the most unconventional Republican, he may just be our first normcore President of the United States.

In September 2013, Vogue published a profile on the Kentucky senator, and mentioned his famous "dad jeans" in passing. That might make him sound a little less hip to some, but could also make him feel more relatable. Still, not everyone is in support of his denim duds: Frayda Levin, a supporter of the senator, told Politico that Paul's attire choice (jeans and cowboy boots) at an annual conservative meet-up in California was “cavalier,” expressing her concerns that such a laid-back outfit might appeal to younger voters, but not older, establishment conservatives.

Despite any scrutiny against his wardrobe choices, Paul's not about to change his signature style anytime soon. In a recent interview with The Federalist he said:

I am who I am, black turtleneck and all.

So, why does any of this even matter? It may seem frivolous, but your fashion choices are the first thing anyone notices about you, so it's kind of important for people who rely heavily on public appearances to score their dream job. Casual attire can make the senator look less like a politician, and more like an ordinary guy. Who's more relatable to the American people — a guy in a Brooks Brothers suit or one in Levi's jeans? Exactly.

In the name of politics (and sartorial leanings) let's a look at everything in Paul's normcore closet, and why it could set the presidential hopeful apart from the pack.

Paul strutted the CPAC stage in jeans, making him stand out from the other, more buttoned-up speakers. His cuffed sleeves show that he's a little less stiff, like someone you'd be down to grab a beer with. Sure, he doesn't look like he could appear in any Calvin Klein ads, but that'd be taking this fashion thing too far.

Like his father, Rand opts for more casual, short-sleeved, button-down shirts. He looks like he'd fit right in at your neighborhood barbecue.

His boots are made more for walking into the barnyard than the Rose Garden. Hey, it worked for Dubya! But will Paul be able to walk all over his contenders to the Republican National Convention in those worn-in kicks?

Ah, yes. This is a classic Paul ensemble. He even opted into announcing his presidential campaign in a turtleneck — though not everyone was impressed by that choice.

Don't worry, he owns a variety of colors of his staple wardrobe item.

If you've been itching to steal Paul's style, you're in luck! There are campaign turtlenecks for sale.

Any weather can be sweater weather, right? Rand's keeping it real at during campaign season, showing up to an event in a sweater. He doesn't discriminate against sweater vests either.

In fact, his choice of button-down shirts under his favorite sweaters has even gotten traction on Twitter. Way to go viral, Rand Paul!