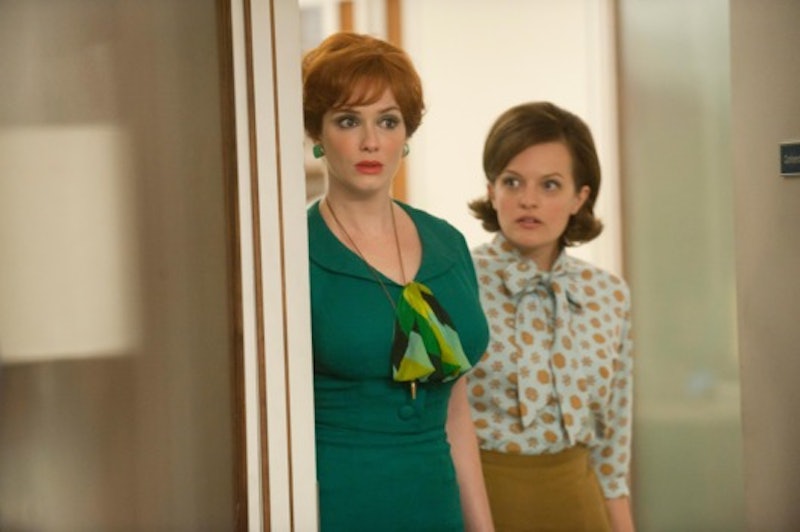 With the highly anticipated return of Mad Men on April 5, it was exciting to see what state of stability Don Draper was in and how far Pete's hairline had receded, but the best part of the new episode (and every episode) was Peggy and Joan. It'd be a vast understatement to say that since the show began seven seasons and seven years ago that Joan and Peggy have both more than come into their own as working women operating in an extremely exhausting environment of machismo. In the mid-season premiere, "Severance," (spoilers ahead) Peggy and Joan are both in positions of power at the agency, but a meeting with a client goes incredibly sour when they are assaulted and demeaned by the men that sit across the table.

They both keep their cool, as they've learned to do, but in the elevator, Joan breaks. "Should we get lunch?" Peggy asks, to which Joanie replies: "I want to burn this place down." We were waiting for her to say it.

I would call Peggy and Joan friends, but their relationship is more complex than that pigeonhole. They've often clashed on how a woman in the office should behave to be competitive with the booze-swigging suits around them. One of the first people Peggy Olson, the New Girl, met at Sterling Cooper was Joan Harris, then the office manager (and now a millionaire partner). Joan gave Peggy, holding her small box of things, the famous paper bag speech.

Joan and Peggy's interactions and relationship over the course of Mad Men is one of the best and most interesting, though not always amicable. They exist side by side, sometimes resisting each other, but ultimately sharing a mutual understanding that they both have to work 10 times harder to stay in the office in the sky. Some of their best moments:

In the very first episode of Mad Men, "Smoke Gets In Your Eyes," unassuming little Peggy Olson with her ponytail comes to work at Sterling Cooper as a secretary, shown around the office by none other than the brassy, beautiful Joan Holloway. As she takes her through and introduces her to the bullpen, she tells Peggy, "Hopefully you'll avoid making the same mistakes I did," and, of course, her advice on evaluating strengths and weaknesses.

"Take a paper bag, cut eyes holes out of it, put it over your head, get undressed then look at yourself in the mirror," she tells Peggy. It's a perfect, small moment that defines the line between Peggy and Joan: Peggy is sincere and a little naive, which will change. And Joan is superficial, but in a smart way — she's really, I believe, trying to be helpful to Peggy, knowing that the agency is a tough place to be a woman.

When Don comes back to the agency after proposing to Megan on the fly in Disneyland in the Season 4 finale "Tomorrowland," both Peggy and Joan are like, WTF? In one of their BEST bonding moments, they hole up in Joan's office to literally laugh out loud at Don's behavior.

Joan reassures Peggy, "I learned a long time ago not to get all my satisfaction from my job," but Peggy's not having it. "That's bullshit," she says, and they both fabulously puff on their cigarettes and laugh and laugh. Nothing better than these ladies laughing at the men that surround them.

In Season 3, Peggy and Joan are becoming more conversational in the workplace. Joan offers Peggy some good, solid advice on updating her buttoned-up tight roommate ad, encouraging her to be freer and more open-minded about living with a stranger. "This is about two young girls in Manhattan. This is about an adventure," she tells Peggy. That Joan Holloway fearlessness luckily rubbed off on Peggy as the series went on.

We Can't All Be You

In one of the most iconic episodes in the Mad Men canon, "Guy Walks Into An Advertising Agency," Joan is leaving (well, that's the plan) the agency to get married to Dr. Slimeball. Peggy, learning the news, congratulates Joan with all the best wishes in the world, and also extends to her a note of gratitude.

"I don't want you to think that I never listened to you," she says, "but we can't all be you." It's true— we can't all be like Joan Holloway, because she's one in a million, and Peggy knows that. (And so does Joan).

They Can Still Just Draw A Cartoon

This is one of the more painful moments between Joan and Peggy, a misunderstanding in the way to handle sexism in the office causing a tender rift between the two. Joey in creative starts making crude comments about Joan, drawing pornographic illustrations of her and Lane Pryce and posting them with glee around the office.

Peggy takes matters into her own hands and has Joey fired, but Joan is insulted: "Now everybody in the office will know that you solved my problem, and you must be really important, I guess… I’d already handled it. You want to be a big shot. Well, no matter how powerful we get around here, they can still just draw a cartoon. So all you’ve done is prove to them that I’m a meaningless secretary, and you’re just another humorless bitch." It smarts Peggy, but is Joan wrong?

On The Way Out

It's a subtle one, but when Peggy decides to leave SCDP, Joan (who has just become a partner) sees Peggy go to the elevator, slipping out from the celebration, and she smiles. It's a perfect, Peggy-Joan moment, and we can't believe we only get six more episodes of their power.