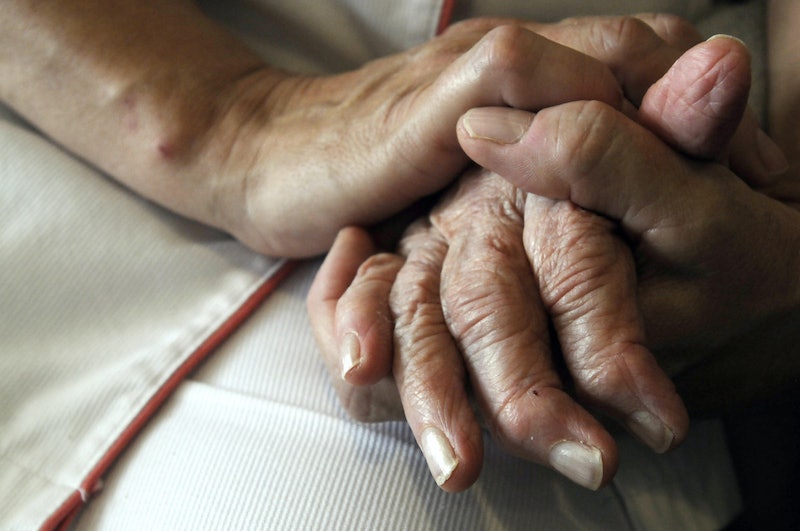 Henry Rayhons, a widower in Iowa, was accused of sexually assaulting his 79-year-old wife Donna Lou Rayhons, an Alzheimer's patient who was living in a nursing home at the time of her death. Donna's daughters are arguing that when Donna was moved into the nursing home (against Henry's wishes), her doctors told Henry that Donna could no longer consent to a physical relationship with her husband. However, there is physical and testimonial evidence to suggest that Henry and Donna continued to carry on an intimate relationship. The state now has to prove if Henry and Donna engaged in sexual intercourse while she was living in the nursing home — and whether or not she could legally consent to sharing acts of intimacy with her husband, bringing up a bigger issue between Alzheimer's and sex.

When it comes to sex and Alzheimer's, Katha Pollitt, a columnist for The Nation who has previously written on the issue of affirmative consent laws in California, says, "I think that these nursing home people and the daughter are meddling. They're taking a very flat-footed, literal reading of consent. It's ridiculous to put this man on trial — this old man who, in my view, didn't do anything wrong. How does the daughter know her mother didn't like having sex with her husband? This wasn't a predatory stranger or an abusive husband... this was an affectionate marriage. They were a loving husband and wife with years of sex between them. The nursing home made a decision that she can no longer even say that she wants sex. What gives them the right to say that? Maybe it was one of the few pleasures she had left.

"Enthusiastic consent is fine and great when people are having casual sex or beginning a relationship — you're working things out and may not know each other all that well, but I think that in a long marriage, it's a little different," says Pollitt. "Remember, the wife didn't bring this case: it was her daughter. I just don't understand that. Why not just let this incident go? Not everything has to be the subject of a court case."

Barbara Glickstein is a public health nurse and co-director of the Center for Health Media and Policy at Hunter College. Glickstein's mother, who suffers from dementia, is 90 years-old and currently resides in an assisted living facility following the death of her husband of sixty-two years. A few months after being moved into the facility, her mother struck up a friendship with an elderly male resident. “My mother loves men and she loves attention. I was thinking, ‘Great! One more person that will be surrounding her and helping her through this transition!’"

It was clear that her mother was doting on her new friend and that their relationship was romantic. "They'd hold hands, kiss mouth to mouth in public and she'd sit on his lap in the main area. They behaved like teenagers. I was so happy for both of them.”

Within weeks, the administrators of the facility called Glickstein. One morning, her mother’s new friend had been found in her room by his son. Her mother's friend "had an accident, so he took off his pants and my mother gave him a pair of her pants so he didn’t walk out of the room embarrassed with soiled pants… It freaked the son out," says Glickstein. "He stormed to the administrator’s office and put a complete blockade between my mother and this man. He threatened to take him out of the facility if the staff didn’t make sure they weren’t sitting next to each other at dinner or activities. It was horrible… if it wasn't so disruptive to her, I would have moved her out.”

When asked about whether patients with Alzheimer’s can consent to sex, Glickstein points to several complexities within this issue. "One of the quotes from the [Bloomberg] article that really resonated with me is when the geriatric psychiatrist [Douglas Wornell] said that the desire for sex is 'along the order of knowing you want some food.' We don’t understand everything that’s happening in the brain or in the behavior of people living with dementia and Alzheimer’s,” says Glickstein.

“Really, it’s a field that we are still exploring… we used to say the word ‘Alzheimer’s’ and believe that everyone was going to have the same kind of Alzheimer’s… the unknown of the expression of Alzheimer’s makes the answer to this question not so simple. Many things disappear in terms of abilities and other things, like emotional reactions which are heightened. Certain sensibilities, certain feelings, certain emotions – sexual desire and the ability to say ‘Yes, that pleases me’ or ‘No, stop’ or ‘Who is this person in my room? Do I feel safe? Do I like the way this feels but I didn’t say yes?’ —that’s a big pot of soup, right? I really think it’s individual and… I don’t feel like I can say definitively ‘yes’ or ‘no.’”

Author Sarah Darer Littman's father died in November 2013 after a long struggle with Alzheimer’s. "My father didn’t remember my name, or even that I was his daughter, but his face always lit up when he saw me until the very end of his life," says Littman. He was put into assisted living on Littman's birthday in 2011, after he had tried to throttle his wife, who was also Littman's mother. Sixteen months after her father's death, her mother unexpectedly passed away in March from a pulmonary embolism caused by a Deep Vein Thrombosis (DVT) after an international flight.

After her passing, Littman and her siblings found their mother's journal, which documented her feelings regarding when her husband had to go into assisted living and some of the things that transpired there. "One of those things was that a woman named Marie thought he was her husband, and they would go around holding hands. One time when I was visiting with my kids, Dad kissed Marie on the mouth. It was hard for me to see, but my daughter, who was a sophomore in high school at the time, was beside herself: 'GRANDPA IS MARRIED — TO GRANDMA!!!' In my mother’s journal, she talked about how painful it was, but then had an acceptance of the fact that it made my father happy on a minute to minute basis," says Littman.

There were other incidents in what Littman refers to as Alzheimerland: "There was the time when I was with Dad. I look A LOT like Mom, especially Mom at my age. And my Dad started telling me how much he loved me -- it wasn’t like a daughter. So I realized I had to get him somewhere there were lots of people or this wouldn’t end well for either of us. He was on the second floor, so I was all cheerful: 'Hey Dad, let’s go downstairs and do some singing.' We go to the elevator, and we’re in the elevator, and on the way down, I see Dad staring at my boobs."

"At that moment," says Littman, "There were three parts of my brain working at the same time: 1) Teenage Sarah: 'OMG! MY FATHER IS STARING AT MY BOOBS! HOLY F*CKING SH*T!' 2) Middle-aged Sarah: 'Uh oh, this isn’t going to end well' 3) Writer Sarah: 'This is going to make a really great tragicomic scene in a novel someday.' And then my father makes a pass at me and I’m like, 'DAD! YOU CAN’T DO THIS, I’m YOUR DAUGHTER, SARAH!' And Dad takes a step back, and gives me this really bashful smile like a naughty three year-old caught with his hand in the cookie jar, and I can’t really be mad because it’s Alzheimer’s Dad, not 'real Dad,' who would have been totally appalled at the very idea!!! Alzheimer’s Dad also told me, in front of my teenage kids, 'I haven’t had sex for a long time.' My kids took it in stride, but I was like 'Oh my god, my dad is talking to me about sex, I want to put my fingers in my ears and go LALALALALA!'”

Littman feels that the case in Iowa highlights the complexity of the issues surrounding Alzheimer's and sexuality. "Alzheimer’s patients are still very sexual beings, as my father and Marie showed me. All I’m saying is, be careful about judging what transpired here based purely on feminist principles," says Littman. "Alzheimer’s doesn’t give a sh*t about that. Alzheimer’s takes away everything."