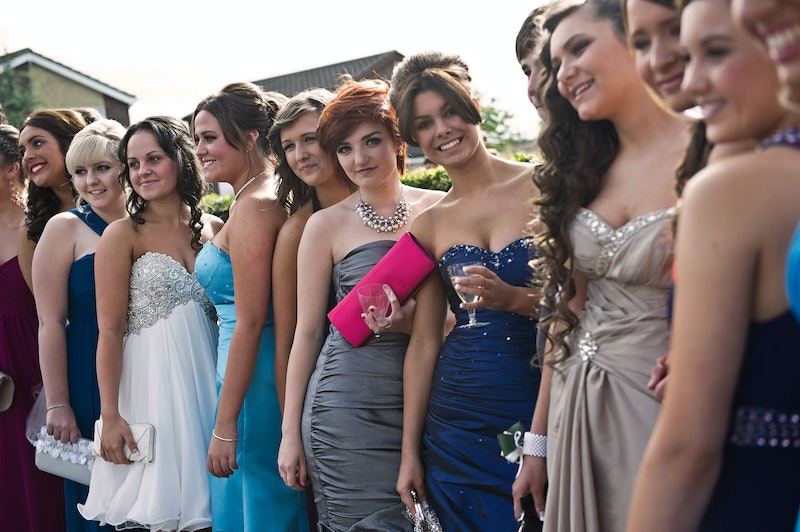 It's officially prom season, and that means dresses, spray tans, corsages, updos, and pictures. If you're anything like me, major photo ops can cause some serious stress. There's a lot of pressure when you know they'll end up on the Facebooks and Instagrams of everyone in your group — not to mention, you'll want to keep them around for a while, too.

Have no fear, though: the key to great prom photos is planning ahead. Here are 9 ways to nail your pictures, whether you're posing with your group, your girls, or your guy.

Preparation for your prom photos starts before you step into your dream dress. Search Pinterest for pose ideas before the big day, and don't limit yourself to looking at prom pictures. Take a peek at wedding photos for inspiration, too — whether it's a snap of a wedding party or the bride and groom, they tend to feel less cheesy and more genuine than prom photos.

There are literally hundreds of photo posing tips out there. Hand on your hip! Chin up! Chin down! It's all so conflicting, because the truth is that it's totally based on the individual. Stand in front of a mirror and practice what looks best — I'm serious. Better yet? Take pictures. It'll feel weird, but you'll be glad when you've nailed your ultimate angle.

3. Study Your Favorite Photos of Yourself

If you're not into the whole practicing in the mirror thing, dig up your favorite photos of yourself and look at what you're doing. How's your head angled? Where are your arms placed? Different poses look great on different people, so knowing the ones you like yourself best in can help you out when it counts.

The big day's finally arrived. If your parents are there taking photos, ask them to be snapping candids even when no one's actually "in position." Personally, my favorite photos from prom are the ones that I didn't know were being taken. One big opportunity for good candids: pinning on your date's boutonniere or getting your corsage.

Whether you're posing in a group or with just one other person, angle your body to the center of the shots. Straight-on photos tend to make people look wider, and a slightly angled stance looks good on almost everyone.

Prom photos have a tendency to look a little forced, so be conscious of that when you're smiling for the camera and look like you actually like the people or person you're with. (Seriously, I looked like I hated my date. Sure, I was pretty pissed at him at the time and we broke up three days later, but I still would have liked to look like I liked him. Awkward.)

7. Stagger Everyone in Group Photos

If possible, in big group photos, suggest that people stand on different levels, like stairs or on a hill. Pics with quite a few people look best when everyone's heads aren't on the same level.

Take a few pictures with your parents. It's a great day for them, too, and they want to be a part of it. You'll be glad you did — promise.

9. Take Photos With Your BFFs

Prom groups can get pretty big, and chances are, you won't be close with everyone there. Set aside time to take photos with just your closest friends, because you'll treasure those ones a lot more than the pics that involve 30 people standing in a line.