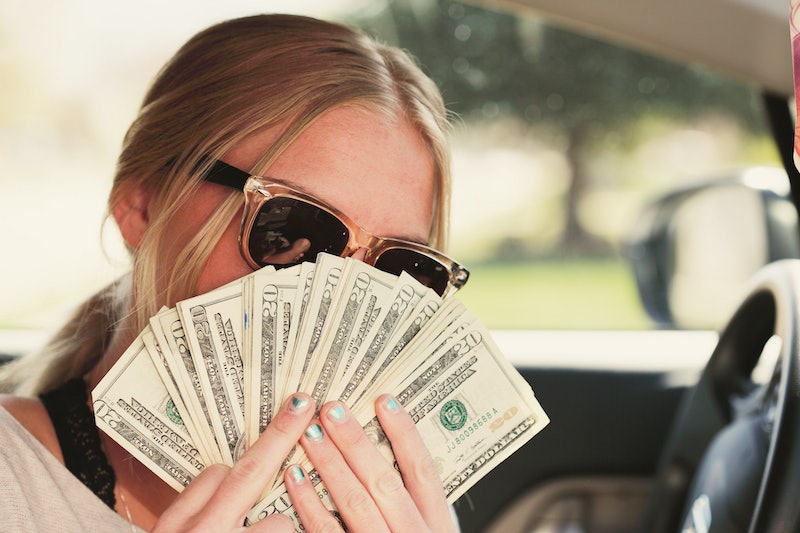 Have a pathological fear of looking at your bank account? Keep burning through your paycheck every month without really knowing how — oh, that's right, you needed a birthday present for your mom and the toilet broke? Living on the edge of your financial resources can feel fine for a while, particularly if you're not earning very much – but once you've got some disposable income, you're going to need to save. It's sensible to start putting some of your dollars away "for a rainy day", or, more specifically, for retirement, emergencies and buying a house. And no, I don't mean in a piggy bank stuffed under your bed. It seems terrifyingly grown-up, but it doesn't mean the end of your youth, or of fun in general. Pinkie-swear.

Saving is a tricky thing — and it's particularly hard in America, where stats in 2014 revealed that nearly 50 percent of the country was living paycheck to paycheck, without a savings buffer in case anything goes wrong. We're saving more than we did before the recession — during the dot-com boom in the mid-2000s, savings in the U.S. were a mere 0.8 percent of total income, while nowadays it's about 5.8 percent — but economic times are still hard. So I don't blame you if you're looking at this article and going, "There is no way I have enough money to have a savings."

But the good news is: you definitely can, even if it's just a little bit each month. There are tips and tricks to help you save like a Mother-F'ing Proper Person. Here are nine of them, so get ready to have that nest egg, ladies.

1. Focus On Paying Off Debts First

This is repeated pretty often to young savers — a good portion of your spare income should go on clearing your debts, before you start putting away a nest egg for the future. The math is simple: debts from college or loans, with their interest piling up, are going to cost a lot more than you're going to be able to save.

However, this can feel like a dangerous plan if you're sending all your spare cash to your college debt collectors every month, and leaving no emergency funds in case something goes wrong. Some experts suggest trying to do a little of both. The main thing, here, is that you don't ignore your debts and focus on saving instead. Baaaad idea.

2. Stick To Debit Rather Than Credit Cards

Credit cards are not free money and will not help your saving plans. If you're trying to put money aside, try to stick to debit payments — i.e., payments out of your current pot of money, rather than payments on credit that will need to be repaid with interest. That'll just drain your income later on.

3. Learn To Manage Your Budget

I completely hate this bit, but it's necessary. Balance the books, guys. Get out all your bills and paychecks, use a spreadsheet, and figure out exactly what you earn, how much tax you're going to pay, and where your money is going every month.

This can be a bit tricky when it comes to "one-off" expenses and changing bills like heating, but it's necessary. Also, don't leave off things that seem like they're irrelevant, like that $1 bottle of Diet Coke you buy every day. That still adds up to $30 a month; it's definitely big enough to figure in the expenses column. An app like Mint can help.

4. Know What You're Saving For

Here's where things start getting interesting. Some money experts say the first thing you should save for should be an "emergency fund," or a couple of months of income in case of disaster. This is definitely a psychological safety cushion, and is probably useful.

Others, however, say this is rubbish and that you should be saving for specific future goals — like a house, a new car, or a vacation. One expert says that "emergency" expenses should reduce as you figure out how to handle money, and that if you're insured you'll probably be OK. So don't feel the need to have a buffer if there's a specific goal you'd much rather work towards.

5. Remember That Coupons Are Great, But So Is Quality

Being savvy with your money doesn't mean you have to end up on Extreme Couponing, but getting a good deal on stuff you use regularly could be worth the effort of learning how to ace coupons and use big-box retailers. The money will add up.

Equally, however, what fashion magazines refer to as "investment pieces" may save you money in the long run. Good-quality shoes and clothing require less mending and will withstand more wear — though if you're going to need to spend dollars on dry-cleaning, don't buy it.

Do not become the boring person at the party talking endlessly about savings accounts — but do quiet research into them on the side. And don't just go with the bank you know and love: shopping around for personal savings accounts, where you can automatically deposit a bit of your income every month and restrict how much you can dip into it, is a part of the landscape. Shop around for good interest rates and low fees.

Retirement accounts might seem like a ridiculously far-off thing, but they ain't. Our generation appears to be more sensible about this than the one before, and most of us think we're probably going to work past 65 — and will need to fund what we're doing after that ourselves. Setting up an IRA or individual retirement account might be a good idea now, to make sure you've got enough to splash when you're 70.

If your work does offer a 401k plan, seriously, get on the list now. That way, you won't need to set up your own IRA, and your work will invest your money for you, and might match how much you put in. You also don't pay tax on your contributions until you withdraw it (usually once you're past retirement age), and how much tax you pay on your income right now is calculated after they've taken the 401k contribution out. It's a pretty good deal — though, of course, you should talk to finance-savvy mates and planners before you commit.

Have tentative plans to own a house one day? Saving for the first deposit might seem completely f'ing impossible – but it ain't. Get your act together and find out about what federal first time buyer grants you might be eligible for. Local grants might be helpful too. For instance, in New York, the SONYMA range of mortgage products offer low fixed-rate mortgages, renovation financing and a bunch of other stuff to first-timers. Illinois's just introduced a new first-time home buyer loan, too.

9. Aim To Save One-Third Of Your Income

I call this the Angelina Jolie rule, ever since I discovered she divides her income into thirds; saving one third, spending another, and giving the remainder away to charity. Obviously, we can't all be Angelina — realistically we'll need that two-thirds to live on — but one-third of our income, once we get to a certain earning point, is actually a pretty good amount to be squirreling away.