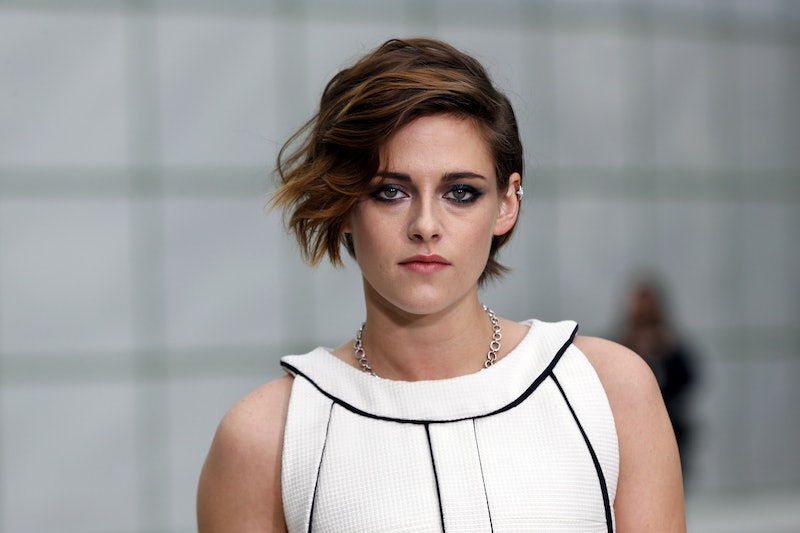 Kristen Stewart has... a bit of a reputation in Hollywood for being, well, sorta miserable. She's not, of course — she's actually a pretty positive, chill person. It's just that she doesn't play the showbiz game and refuses to pretend to be the Hollywood darling when that's not her at all. Anyone who's taken the time to actually read K. Stew's interviews or watch her on talk shows will see that she's not only happy and well-adjusted, but she's also super smart and has a lot of great things to say — if anyone's willing to listen, that is.

But there's one thing I love about K. Stew more than anything else, and that's her IDGAF attitude. No matter how much criticism she's taken for her apparent indifference or refusal to nod and smile even when she doesn't agree with something, she's still not budging. She insists on being who she is, embracing things that a lot of actresses would probably try to hard. She's occasionally painfully awkward, but she knows it and she owns it. She takes heat for her role choices, but she doesn't really care — and why would she? She won a Cesar! At the end of the day, K. Stew just doesn't GAF what you think, and that's why I adore her.

When another reporter asked her a dumb question

Come on, man. Really? K. Stew isn't just going to sit there and take it when you're asking her dumb questions that show how you haven't done your research and are being all generic. Nope, no thanks.

K. Stew doesn't need your permission to hit the road. When she's ready to go, she's outta there, no questions asked.

When she found you a little bit annoying

She might be a great actress on screen, but in real life, K. Stew isn't so great at hiding her feelings. She's probably pretty easy to get along with, but she likes people to be real with her, and if you're not, she'll let you know.

When she put her foot in her mouth... again

K. Stew knows she's a bit awkward and she owns it. But that doesn't mean she doesn't get embarrassed just like the rest of us when she says the wrong thing — or when she doesn't know what to say at all. It's OK, girl. I feel you.

When she was asked how she feels about the paparazzi

Sure, attention from the paparazzi may come with the territory of being a celebrity, but Kristen considers herself an actress, not a star, and hates being hounded by photographers all the time. How do you feel about them, Kristen? Totally.

Sure, she might be a celebrity with the press trained on her every move, but K. Stew is also a young lady who likes to let her hair down every once in a while and get wasted like normal people, and what's wrong with that?

When she played Bella in Twilight

Sure, it was hard to take Twilight seriously because of the whole sparkly vampire thing, but so what? It was a fun project that made her some money and also made it possible for her to get more of the kinds of roles she actually wanted, so stuff it, haters.

When she was bored by what you were saying

Look, she doesn't mean to be rude, she just can't feign interest in Hollywood mumbo jumbo. She'll listen politely and let you finish, of course, but she's not going to pretend she's excited when she's not.

When she went a little bit crazy