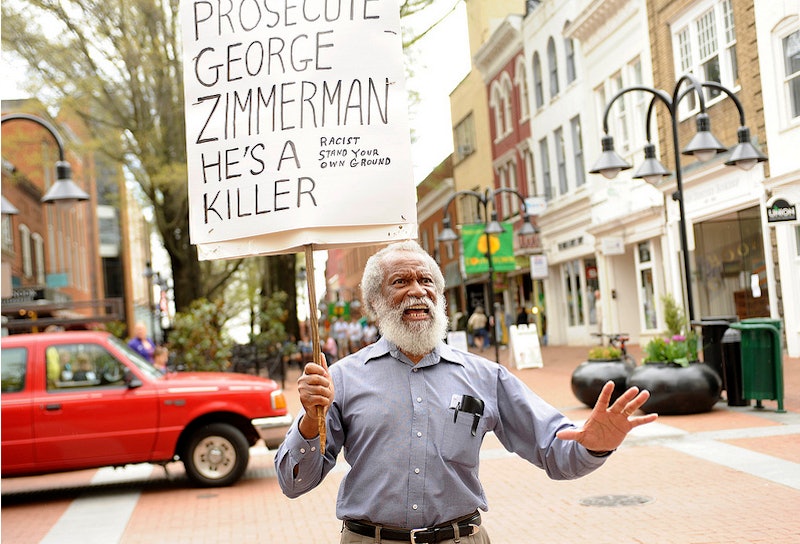 On Monday morning, George Zimmerman will go on trial for second-degree murder. As in most murder trials, a panel of jurors will determine whether Zimmerman is guilty—and court analysts estimate that 85 percent of trials are won or lost the minute the jury is confirmed. The prosecution, defense, and judge have agreed upon six female jurors—all of whom, bar one, are white. What effect might this selection have on what will likely be one of the highest-profile trials of our generation? Here's what we can guess:

They'll already know about the case—but they've been selected for their impartiality.

The catchily named Juror B-51 (their names aren't released) put it this way: "I haven't lived under a rock for the past year. It's pretty hard for people not to have gotten some information." The charges against Floridian George Zimmerman—whom many people believe unlawfully and unjustifiably killed black 17-year-old Trayvon Martin—received national attention second only to the 2012 presidential race. During the nine-day jury selection process, the randomly-selected men and women were asked repeatedly about their knowledge of the case, and, most likely, their personal lives and political leanings.

The prosecution likely fought for black jurors—and it's anyone guess as to why minorities have been outnumbered in this jury five to one. A Duke University study revealed that white jurors tend to convict black defendants, but that juries are far less likely to be racially prejudiced if there is at least one black juror present. (The minority juror on this case is reported to be half-black, half-Hispanic. Zimmerman is also Hispanic.) The Sanford community of Florida where Martin was shot roughly mirrors the racial demographics of the jury.

A report entitled "Are Juries Fair?" found that the dominating factor in decision-making during trials was gender (over age, profession, income and religion.) According to the 2010 report, female jurors are initially tougher, but also far more likely to change their mind during the course of trial. Two-thirds of defendants who changed their vote during simulated cases in the study were female. [Insert broad sexist conclusion here.]

What do we know about the jury?

Two of the women own guns in their homes. One used the case as an example for her two teenagers when advising them not to go out at night. Two rescue animals in their free time, one prefers reality television over news coverage, and at least two have been victims of a crime. There are also four "alternate" jurors—as is common in high-profile and fast-moving trials—in case one of the originals is struck off, or becomes unwell. They'll all be kept away from media coverage of the trial (or, in fancy terms, sequestered) while serving as jurors. The case should last between four and six weeks.

More like this
Casey Anthony’s Father Said He Was “Ready To Forgive Her” Before She Renewed Allegations
By Brad Witter
The David Beckham Qatar Controversy, Explained
By Sophie McEvoy
These Are The Murder Suspects You Didn't See In 'The Texas Killing Fields' Doc
By Grace Wehniainen
Casey Anthony Revisits Abuse Allegations Against Her Brother In Her New Docuseries
By Grace Wehniainen
Get Even More From Bustle — Sign Up For The Newsletter