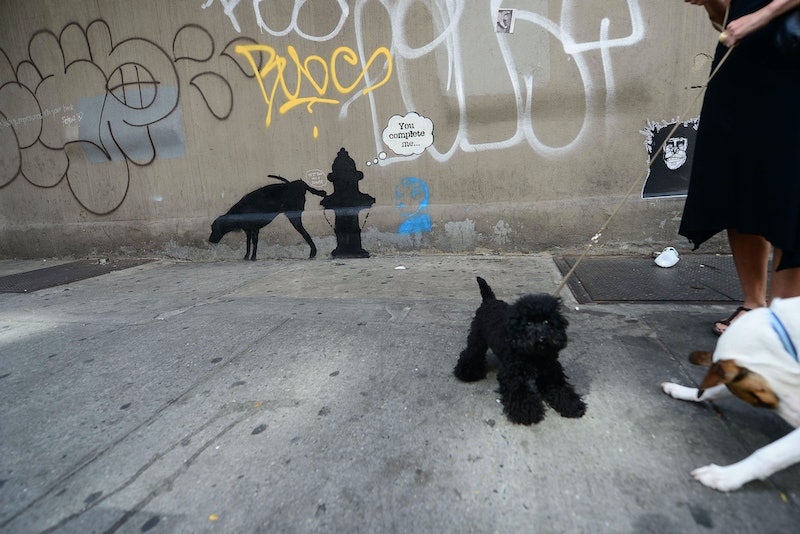 Midway through his month-long “residency” in New York City, Banksy has supposedly canceled a planned art piece due to “police activity.” This is entirely plausible; after all, Mayor Michael Bloomberg hasn’t taken kindly to the elusive street artist’s presence in the city, and has commanded the NYPD to capture him at all costs. Of course, because this is Banksy we’re dealing with, it’s entirely possible that his announcement of the cancelled art piece is, itself, the art piece.

Banksy undertook the residency on October 1st, and has revealed one piece of art every day since then. Earlier in the month, he set up an art stand outside of Central Park and sold his original work for $60 a pop; while Banksy pieces regularly fetch hundreds of thousands of dollars, most people must have assumed they were knock-offs, as he only walked away with $420 at the end of the weekend. Last week, he set up a fiberglass model of Ronald McDonald with comically oversized shoes outside a McDonald’s, and had an assistant shine his shoes.

But today, Banksy announced on his website that "Today's art piece has been cancelled due to police activity." That's plausible: Bloomberg has made it clear that he considers Banksy’s art — which, to be sure, does include unsolicited graffiti — is vandalism, and has ordered his underlings to scrutinize all available surveillance footage in an attempt to apprehend the vandal.

“Graffiti does ruin people’s property and it’s a sign of decay and loss of control,” said Bloomberg. “Nobody’s a bigger supporter of the arts than I am. I just think there are some places for art and some places where — no art.”

It's odd for Bloomberg, the city's mayor, to reference "a sign of decay and loss of control," as that would seem to suggest that he himself has lost control of the city, with decay being the result. But anyway, Banksy, who has somehow managed to keep his identity a mystery for the entirety of his twenty-year career, is known for making art that operates on something of a meta, self-referential level, so the whole "art cancellation" could be a hoax. Similarly, his Oscar-nominated documentary Exit Through The Gift Shop purports to focus on the life of fellow street artist Mr. Brainwash, but there’s debate over whether the documentary is real or staged, and whether Mr. Brainwash even exists or is simply a creation of Banksy.

So is the cancelation real? Or just another performance? Who knows? Who cares!

More like this
What To Know About Martin Bashir After Watching 'The Crown'
By Bustle UK
We’ve Got A Text! Another 'Love Island' Series Is On The Way
By Darshita Goyal
Millie Gibson Still "Can’t Believe" She Was Cast As Doctor Who's Companion
By Brad Witter
Julia Fox's Latest Makeup Look Includes Thin, Penciled-In Eyebrows
By Olivia Rose Ferreiro
Get Even More From Bustle — Sign Up For The Newsletter