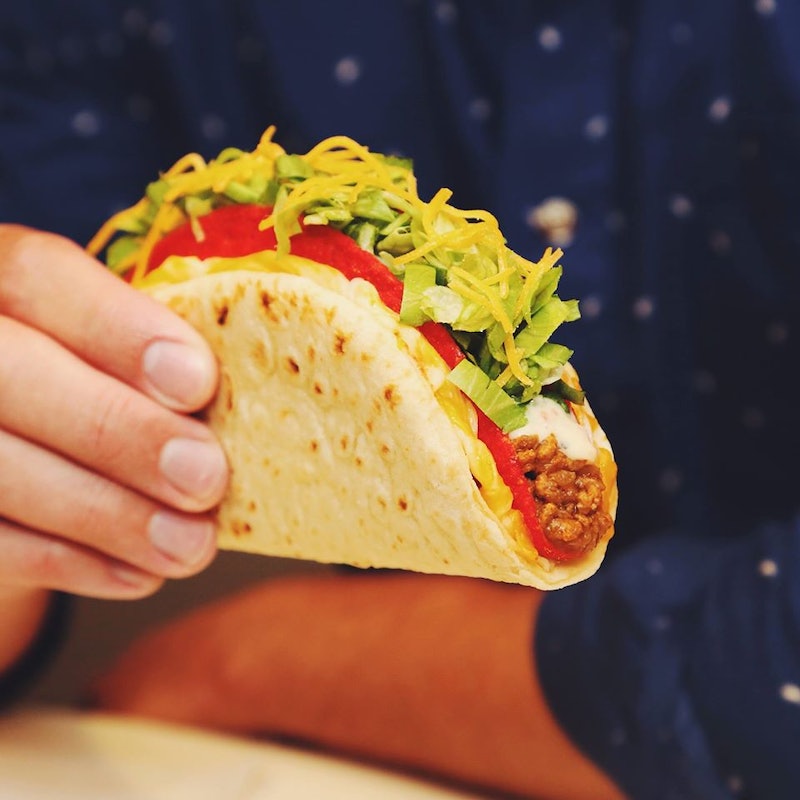 Taco Bell made some huge waves the other day when CEO Brian Niccols remarked that a Taco Bell delivery service could be waiting for us somewhere in the future. But where? Where can we get Taco Bell delivery? Alas, that is information we do not yet have. In fact, Taco Bell has yet to release any concrete facts about its intended delivery service; indeed, the company apparently still needs to figure out the logistics of how such a service would work. Said Niccols to Nation's Restaurant News, “Even though it's the No. 1 request from consumers, we have to make sure we can give them an experience that's consistent with Taco Bell, and that's what we're working through. We have to figure it out, and I can tell you right now that we don't have it figured out.” Fair enough; that's an answer I can respect.

I did a little digging just to see if I could find any crumbs of information out there in Internetland — I mostly came up empty (unsurprisingly), but I did also find this: Order Up has a few Taco Bell locations in its database. I'll admit that I'm not totally clear on how Order Up works; initially I thought it was a sharing economy delivery service (kind of like Uber for food delivery), but after looking at its “How It Works” page, I'm not so sure that's actually the case. In any event, you can apparently order Taco Bell on Order Up in Charlottesville, Raleigh, and Iowa City. Do with that what you will.

EDIT: OrderUp reached out to us, and apparently I had it right the first time — it is like Uber for delivery. You can order food from restaurants that don't deliver; then one of OrderUp's driver partners picks it up and drops it off for you. Mystery solved!

Even though we don't know exactly where Taco Bell's delivery service will appear when it finally enters the testing phase, here are a few types of locations I think could probably benefit from it. Or… hang on. Maybe not “benefit,” per se — but I definitely think folks in these locations would appreciate its existence.

Because college students probably eat more Taco Bell than anyone else (that is not an official statistic, though, so don't quote me on that). Claremont, California, for example, would probably love it — the Claremont Colleges system includes five undergranduate schools and two graduate ones, all of whom would probably appreciate not having to leave campus in order to get a Doritos Locos Taco or two. The Boston area, with its multitude of public and private universities, would likely also get some use out of on-demand burritos.

2. The Entirety of Colorado

And/or anywhere else marijuana is legal. Munchies happen.

3. Towns That Only Have One Taco Bell

Yes, actually, it is a thing. I know, because there is only one Taco Bell near me, it is the only Taco Bell in that town, and it is actually several towns away from where I live. The suburbs are not always known for their density of... things.

Anyhoo. having a fleet of delivery people will keep the lines down at the lone Taco Bell location while still enabling plenty of people to get their food.

4. Towns That Have Loads of Taco Bells

Just think of how much business they could bring in!

5. Taco Bells That Are Located Near Starbucks Locations

Maybe they can team up with Starbucks on a taco-and-a-coffee deal and pool their delivery people to make it happen.

It's where Taco Bell's home base is, so it's only fair that the delivery service kicks up close to home, right?

7. Anywhere I Happen To Be At Any Given Time

I can even equip myself with a homing beacon, if it will help. Because seriously, you guys. TACO BELL DELIVERY.