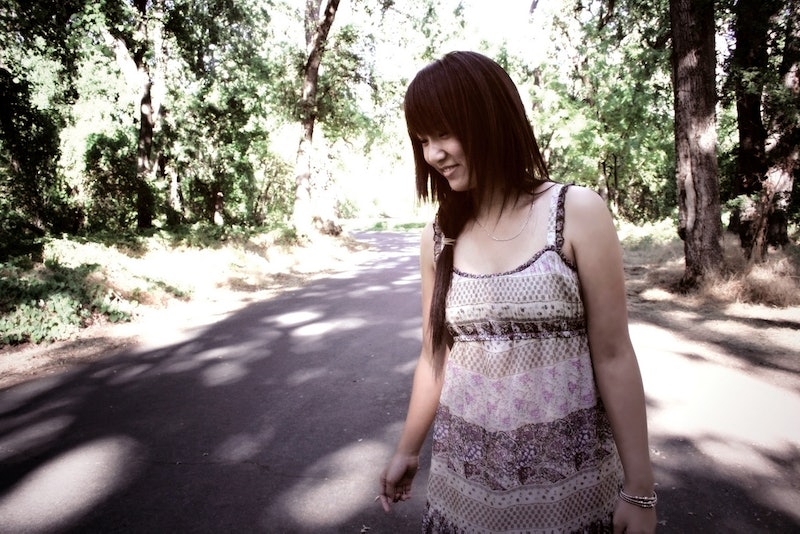 Stereotypes about women are everywhere. I don't have to tell you that — you know it's one of the many reasons why we have this thing called "feminism," and why we're constantly pushing to raise our voices to get us seen for who we are, asking for equality across the board, and, oh, hey, patriarchy? Your mom called, and asked if you could stop being so judge-y.

At AWP 2015 Minneapolis, five writers gathered together on a panel called "Young Adult Literature and the Female Body" to talk about the way authors of female characters in YA are pushing the limits of what young women can discover and do with their bodies in their stories, aka breaking stereotypes left and right. Moderator 􏰲􏰨􏰌􏰡􏰕􏰊􏰄􏰅􏰝􏰤􏰉􏰉􏰑􏰗􏰄􏰄􏰳􏰍􏰕􏰊􏰑􏰖􏰄􏰈􏰉􏰓􏰪􏰌􏰍􏰝􏰗􏰄􏰄􏰈􏰐􏰍􏰙􏰔􏰝􏰙􏰊􏰌􏰄􏱀􏰌􏰘􏰘􏰌􏰍􏰜􏰕􏰊􏰊􏰗􏰄􏰄􏰅􏰓􏰌􏰹􏰕􏰊􏰑􏰍􏰕􏰄􏰫􏰒􏰊􏰎􏰕􏰊􏰗􏰄􏰄􏰏􏰝􏰌􏰣􏰌􏰄􏰳􏰍􏰌􏰴􏰌􏰊􏰉􏰋􏰋Megan Atwood spoke alongside Brandy Colbert, Christine Heppermann, Alexandra Duncan, and Steve Brezenoff about ballet dancers, queer narrators, women in fairytales, and tons of other representations of girls in fiction portrayed in the many (many!) books they and their colleagues and friends in YA have written.

The best part of the conversation, though, was hearing that if you're a fiction writer constructing a young woman character, you have so much power with your pen (or, OK, your laptop). You can break down cultural stereotypes about girls that have been in place for years — and that still get perpetuated day after day — just by creating a character that digs deep with her feelings and motivations.

Here are nine ways that you can stand up to stereotypes with your writing. Because, yes, the pen is mighty, indeed:

Shine A Light On Cultural Expectations… and Better Yet, Subvert Them

“There’s so much being said [in the media] — you have to be this way or that way,” Heppermann said. Some experts even dictate the way you “have” to relax—it’s exhausting! Use your fiction to put the spotlight on certain cultural messages about what is expected of girls — and then write in the other direction. Be vigilant not to fall into writing characters whose behaviors are reinforced by culture about what girls are supposed to be, and instead use your work as a vehicle to expose what is uncomfortable about these constructions.

Look Beyond the Main Romantic Relationship

Your character probably meets a cute girl or guy and has a fling, or even finds true love, right? Dig deeper and break out of the box of a traditional romance story. If you force your characters to figure out what their lives are about “beyond love,” Duncan said, you’ll discover that there is a lot more to the stories of the young women you’re writing about. They’ll be more dimensional, and be forced to face truths about themselves.

Sure, your target readers have gone through a high school sex-ed class, but do they really know what real sex is like? Do they know what it's like to have complications with a period, or have they ever heard of ovarian cysts or endometriosis? You'll do you readers a service by exposing them to un-sanitized truths about the female body through your fiction. That's what Duncan did with her work. "I wanted to fold some of those ideas and issues into some of what I was talking about ... in a non-didactic way," she said.

Write Characters of Color, and Make Sure They Break Out of the Box

There aren't a lot of novels, YA or otherwise, that show a diversity of races and orientations — this isn't news. (#WeNeedDiverseBooks, anyone?) But sometimes, when people of color do show up in the pages, “characters are expected to be perfect and not make mistakes," said Colbert. Consider writing fiction that not only features diverse characters, but allows them to be imperfect and fully human — that's how we end up with a full range and representation of people.

Make Your Characters Sexual People, and Don't Shame Them For Their Desires

Think about the last young woman you read about in a book: if she expressed sexuality in some way, she probably wasn't the heroine of the story... or she at least wasn't rewarded for her desires (despite them being totally normal!). Usually characters with sexual urges get policed — or worse, get STIs or pregnant. To help get past stereotypes, give your characters sexuality in a realistic way, and don't shame them for it.

Dissect the Culture of Predation In Your Pages

Predation doesn't just happen when men catcall on the sidewalk — young women are taken advantage of in many different situations that are, unfortunately, very familiar to teenagers. Explore these charged topics — they're super-important to dissect to distill stereotypes, especially when teenagers are forming their self-worth through the way men look at them, Heppermann said. Colbert said to also explore the complex emotion of self-blame, because "girls feel like they are the gatekeepers [when it comes to sex] — they have to say 'no,' while the guys are the ones saying 'yes.'" But it isn't always that simple, is it?

Give Your Girls Characteristics That Break the Mould of Traditional Femininity

Make them hungry for pizza. Or have body odor. Whatever you do, allow the young women you write to take on traits that aren't considered traditionally "feminine." Seeing more representations of girls like this is the only way we'll be able to break the stereotype of a woman who's not always a delicate flower as being "raunchy." But wait — this one's a two parter. Atwood cautions against "villainizing traditional femininity" by saying something like, “I’m not like other girls,” and turning super-feminine girls into adversaries. There are lots of types of girls, and they can all coexist on the page!

Whether your character is LGBTQIA or just open to other characters who have queer relationships, be a stereotype-buster by introducing open views and alternative relationships in your fiction. Perhaps two of your characters, one male and one female, can have a crush on the same guy! But, Heppermann says, the key is to work it into the text "without flashing lights."