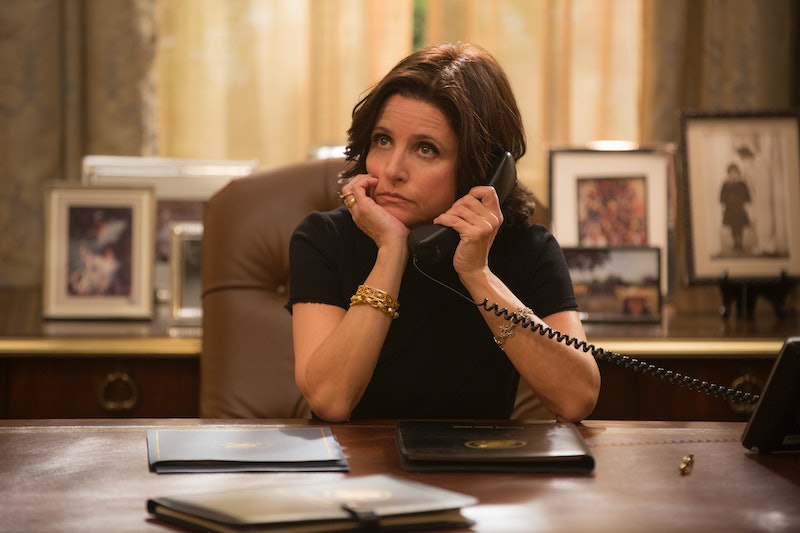 Presidents' words are extremely important. Their speeches and sayings are meticulously rehearsed and recorded so they can be passed down to future generations. Vice Presidents? They can say whatever the eff they want. At least that's the case with Veep's Selina Meyer, who's said a bunch of stuff I'm sure she would not want preserved for posterity. (Most of it, actually.) When the show returns to HBO on April 12, though, she's going to have to start watching what she says — last season ended with her predecessor stepping down, making her interim president. Up until then, though, Meyer was off the leash, and able to say exactly what she wanted. Before she ascends to the commander-in-chief position, let's review some of Selina Meyer's best Veep quotes.

If you think about it, these are probably things you've wanted to say (or scream) to the people around you. Amazingly, she has the perfect thing to say for every situation. A word of warning, though: While she gets to the heart of everything you wish you could say, she doesn't always do it with scholarly language. If you're offended by cursing, get out while you can. If you've got the mouth of a vice-presidential sailor, though, here are some handy Meyer quotes you can use (or just wish you can use) in these awkward social situations.

When Your Co-Worker Is Telling a Long-Winded Story

When Your Neighbor Wants You to Help Him Move

When Your Parents Ask If You've Filed Your Taxes Yet — And You Haven't, But Want Them to Believe You Did

When You've Been Mansplained, & The Guy Tells You To Not Get Uptight About It

When Your BFF Says You're Being a Diva, But Really You Just Deserve the Spotlight

When You Run Into Your Ex & He Tries To Be Friendly

When You Can't Decipher Your Friends' All-Emoji Text

When You Accidentally Hit "Send" Before You Mean To & It's Bad

When You're Psyching Yourself Up to Call Customer Service

When You've Had the Roughest of Days

When All Other Words Fail