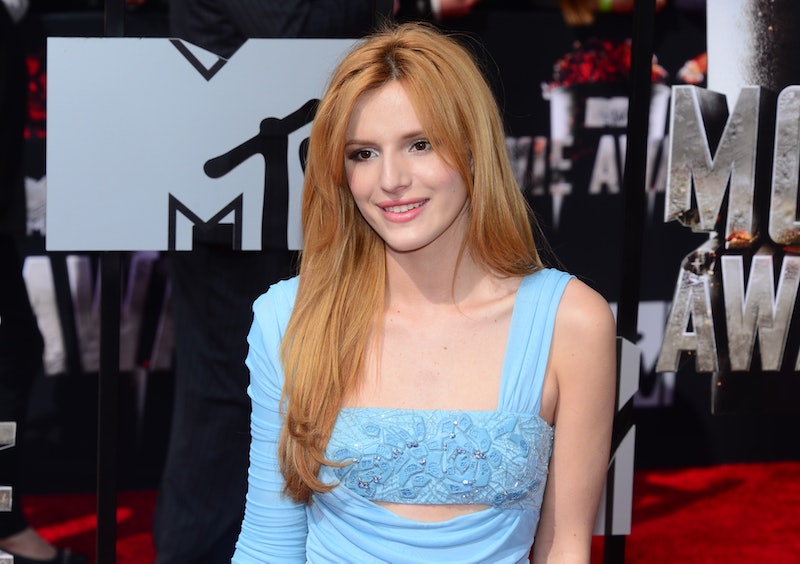 During Sunday night's MTV Movie Awards, Bella Thorne will make a big announcement about MTV's Scream . Wait — that can't be what it sounds like, can it? Before Thorne can make the big unveiling at the awards, just what the heck is MTV's Scream ? It is, in fact, just what it sounds like: a TV series adaptation of the horror film franchise. But don't expect it to be a re-do of the old Neve Campbell movie. The characters are going to be different; it's the location that ties the new series to the original. According to the official show description, "After a cyber-bullying incident results in a brutal murder, the shocking violence stirs up memories of a killing spree from the past that has haunted some, intrigued others and maybe just inspired a new killer."

Don't get too attached to Thorne's involvement in the series, though. At the MTV Movie Awards, she's going to introduce the trailer for the series and unveil the final release date, which should be sometime in the fall (around Halloweentime, naturally). She'll also appear in the series — but for how long is anybody's guess. According to Entertainment Weekly, Thorne told fans in a Facebook Q&A that she'll "re-enact the famous scene of Drew Barrymore in the original series." Uh-oh. That's not a good sign for her character's fate.

Something else that you won't see in the new series: the famous "ghostface" Scream mask. The show is reportedly developing its own creepy face-covering. “It’s a darker, almost more grounded, evolved version of the mask,” Mina Lefevre, MTV’s senior vice president and head of scripted development, told Entertainment Weekly in a different article. “It’s something we’re constantly talking about. How did that mask become that mask? What’s its purpose? How did it evolve? If the Scream movie mask was the more plastic version, for a lack of a better description, this one is a more organic looking and frankly darker version.”

Really, it's not surprising at all that Scream is returning to the screen. If you haven't noticed, we're in the midst of a full-on '90s revival right now. Other '90s pop-cultural touchstones that may possibly return to air are being announced every day: Twin Peaks, The X-Files, Full House. Nothing is safe from the nostalgia machine. Scream kind of kills two '90s birds with one stone, beause the original movie was written by Kevin Williamson, of Dawson's Creek fame. (Williamson will not be writing the new series; Arrow's Jaime Paglia and Ravenswood's Jill Blotevogel willl be the showrunners.)

So, now that they've taken on Teen Wolf and Scream, what horror-ish movie should MTV turn into a TV show next? I think The Blair Witch Project could make for a good series — reality shows basically paved the way to make it happen.