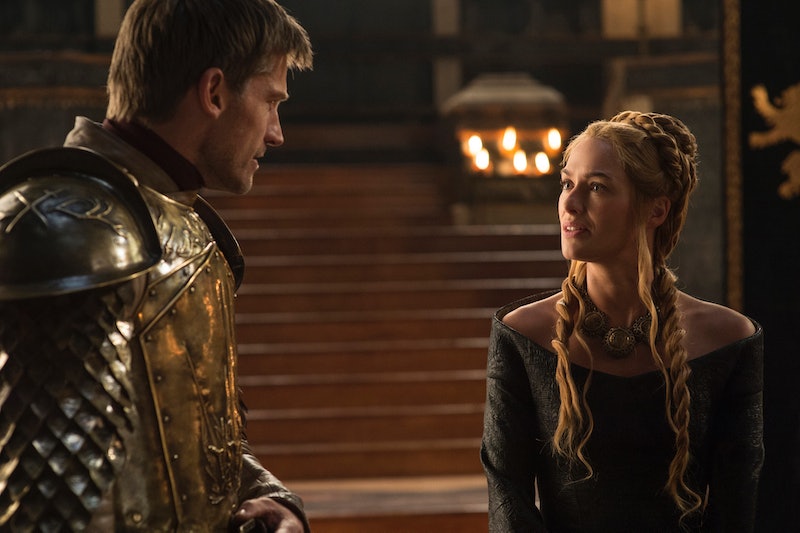 So, does this mean we have to start making excuses for Cersei now? Because I really can't see myself doing that. During Sunday night's Game of Thrones Season 5 premiere, the HBO series took us way back into Westeros history and let us see the little monster that became Cersei Lannister. In Cersei's Game of Thrones flashback, the series introduced two characters — Cersei's childhood friend, Melara Heatherspoon, and a Witch. So, who is this person and did the Witch just predict Tommen's death on Game of Thrones ? This post contains some book spoilers from A Feast For Crows.

To identify Cersei's childhood friend, I had to look to George RR Martin's source material to learn both the character's name and her fate from being Cersei's friend. But, really, it's hard to choose which new character that this flashback introduced is more important? Basically, this witch or Maggy the Frog, can see the future and, from A Feast For Crows spoilers, we know that Cersei went to visit Maggy to learn whether or not she'd be queen someday and whether or not she might marry Rhaegar Targaryen. But, unfortunately, Cersei heard less of what she'd wanted and more about the doom to come.

If you didn't hear Maggy's words so well, you might not have noticed that the valonqar prophecy spelled out a dark and death-ridden future for Cersei Lannister. In Martin's novel, the witch tells the future queen that she will, in fact, be queen before stating that Cersei will have three children with her future husband while he has 16 of his own. Sure, that sounds bad already, but it really does get worse. Maggy tells Cersei of her children, "Gold shall be their crowns and gold their shrouds. And when your tears have drowned you, the valonqar shall wrap his hands about your pale white throat and choke the life from you." And that, of course, a younger queen will come to take her place.

But, the important part of the prophecy is what it suggests about the fate of Cersei's remaining two children — Tommen and Myrcella. This is essentially confirmation that both of Cersei's younger children will die on Game of Thrones. Clearly the prophecy is coming true with Margaery Tyrell and Daenerys Targaryen well on their way to taking over and the fact that all of Cersei's children are blonde and one of them has already died. Should we all start feeling like Cersei might not be the worst because she's been doomed from the start? Probably not, but this is going to make for a truly tragic end for Cersei Lannister.