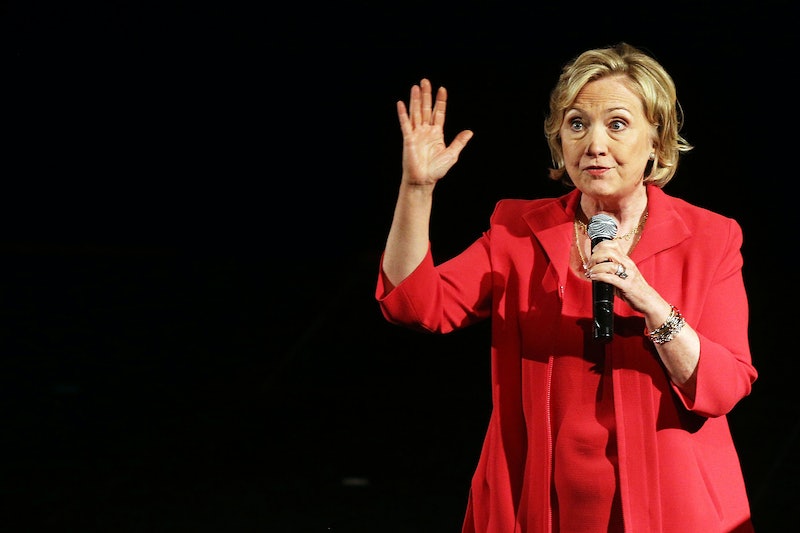 On Sunday, we found out, after long last, that yes, Hillary Clinton is running for president. It wasn't a complete surprise; aside from the rampant speculation, new epilogue to her book Hard Choices posted on the Huffington Post on Friday not-so-subtly hinted at one of her campaign strategies, using the birth of her granddaughter to talk about creating opportunities for all American children. As a powerful woman in Washington, Clinton knows a thing or two about how women are treated and what needs to change for women in America, evident by Hillary Clinton's long list of feminist quotes from over the years.

Whether she's speaking to her colleagues, a reporter, or addressing the public, Clinton always stands up for women, our rights, our abilities, and our importance. That would be the beauty of having a female president — the leader of the United States would not only advocate for women, but would have in intimate understanding of the biases and struggles women face. Clinton is often very empowering to young women, encouraging us to be self confident and have good character. To further understand how she feels about women's roles in the U.S. and abroad, here's a roundup of the Clinton's most feminist quotes.

There is no doubt in my mind that without the involvement of women in the economy, in politics, in peace-making, in every aspect of society, you can't realize [a country's] full potential.

American women don't need lectures from Washington about values. We don't need to hear about an idealized world that was never as righteous or carefree as some would like to think.

The world is changing beneath our feet and it is past time to embrace a twenty-first-century approach to advancing the rights and opportunities of women and girls at home and across the globe.

I have always believed that women are not victims, we are agents of change, we are drivers of progress, we are makers of peace -- all we need is a fighting chance.

There's that kind of double bind that women find themselves in. On the one hand, yes, be smart, stand up for yourself. On the other hand, don't offend anybody, don't step on toes, or you'll become somebody that nobody likes because you're too assertive.

6. The Secretary: A Journey with Hillary Clinton from Beirut to the Heart of American Power, 2013

Educating young women is not only morally right, but it is also the most important investment any society can make in order to further and advance the values and the interests of the people.

I am a woman and, like millions of women, I know there are still barriers and biases out there, often unconscious, and I want to build an America that respects and embraces the potential of every last one of us.

Equal pay is not yet equal. A woman makes 77 cents on a dollar and women of color make 67 cents... We feel so passionately about this because we are not only running for office, but we each, in our own way, have lived it. We have seen it. We have understood the pain and the injustice that has come because of race, because of gender. And it's imperative that... we make it very clear that each of us will address these issues.

Women are the largest untapped reservoir of talent in the world. It is past time for women to take their rightful place, side by side with men, in the rooms where the fates of peoples, where their children's and grandchildren's fates, are decided.

There is a double standard, obviously. We have all either experienced it, or have seen it. There is a deep-set of cultural, psychological views that are manifest through this double standard… Some of these attitudes persist, and if they persist in as open, and in many ways transformational society as ours is in the 21st century, you know how deep they are.

At this point in my career, I have employed so many young people and one of the differences is that whenever I would say to a young woman, I want you to do this, I want you take on this extra responsibility, I want you to move up, almost invariably they would say, “do you think I can?” or “do you think I’m ready?” Well, I wouldn’t be asking you if I didn’t think you could and that you were ready. But I know that is often the first response from a young women. When I ask a young man if he wants to move up, he goes, “how high, how fast, when do I start?” There is just a hesitancy still of women’s worth and women’s work that we are going to have to continue to address so more young women feel free to pursue their own ambitions and be successful.

More like this
How To Fight For Reproductive Rights, Based On How Much Time You Have
By Courtney Young
34 Quotes That'll Inspire You On Juneteenth & Beyond
By Syeda Khaula Saad and Siena Gagliano
How 5 People Upended Their Lives To Fight For Abortion Rights
By Hannah Smothers
Boris Johnson’s Leadership Is In Question – Again
By Bustle UK
Get Even More From Bustle — Sign Up For The Newsletter