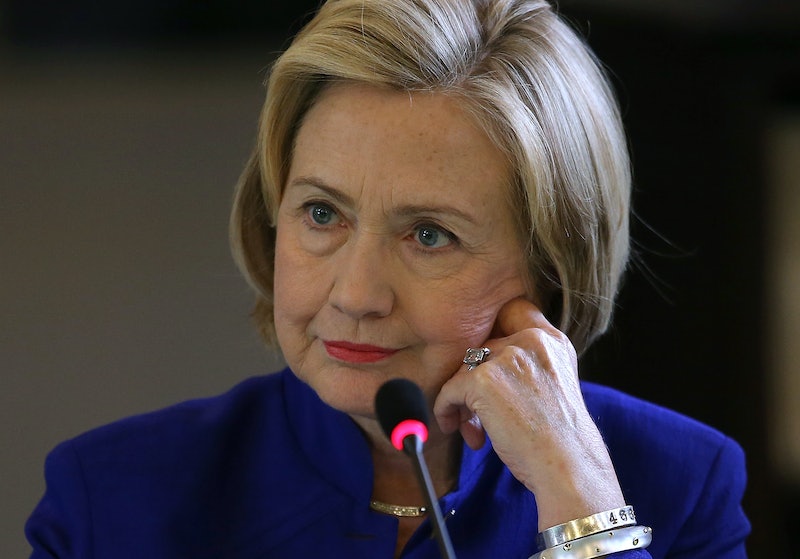 It's a tale as old as time: a woman with aspirations, political or not, makes an ambitious move towards her goals only to be pelted down with sexist remarks and arguments that, more often than not, don't even make sense. Now that we're finally going to see a presidential run from Hillary Clinton, it's time to get real about the challenges she faces. Because even though we're talking about the 2016 election, when American women have the right to education, the right to vote, and the right to own property just like any other grown adult, there are still plenty of sexist arguments floating around out there about why women shouldn't be in positions of power.

Many people might see it as a move that signals progress in and of itself that Hillary Clinton would even run for President. Some might even say it shows that we've made it all the way to complete gender equality if a woman can run for office alongside a man. That would be great, but unfortunately, it's just not true. Those opposed to Clinton's run, mostly from the Republican side, have been preparing their sexist arguments against her run for years before she even announced her 2016 candidacy. It's time to end the madness. Here are the 9 typical, ridiculous sexist arguments that have been used to try to bring Hillary Clinton down — and why we're taking them down.

1. She's A Wife, Mother And Grandmother First And Foremost

It's hard to even get through the YouTube compilations of sexist media comments about Hillary Clinton because they're just so cringeworthy. Commentators on channels like Fox News have said Clinton's voice, "like so many women's," reminds them of a shrill mother or "everyone's first wife." This is so derogatory that it actually makes me uncomfortable just watching the seconds-long video clips, so I shouldn't have to explain to any other sentient person that a person's tone of voice does not determine who she is.

And that's not the only criticism leveled at Hillary — in addition to being characterized as a nagging mother and "overbearing yuppie wife from hell," she has also had her abilities called into question because being a grandmother will probably take up all her time. Jon Stewart called out reporters for even asking this question.

As Stewart pointed out, "Mitt Romney has like a litter of grandchildren."

2. If Women Could Really Be President, Wouldn't One Have Run Already?

Um, hello? Hillary Clinton already did make a bid for the Presidency in 2008. She was surpassed by Barack Obama, but not before the media lashed sexist comments at her from every angle. Women still get pummeled with aggression and mockery for just being in the political sphere, so there's no surprise we haven't had a female President yet. But just to show the world, Clinton's going for it again — and that's what counts.

Just because we've never had a First Gentleman doesn't mean we shouldn't. We've also never had a taco emoji, and that's not right either. And Bill Clinton is perfectly excited to support his wife on the trail, so we should be too.

4. Her Husband Is The Only Reason She's A Politician

Seriously? Clinton wouldn't have made it as a real, live acting Secretary of State if all she had going for her was her title as Bill Clinton's wife. And all the support for her isn't just a pity party, either — she has strong political views.

Clinton dresses for the job she wants, which means she doesn't wear miniskirts to work. But her adoption of a pantsuit uniform has made her the target of incessant mockery, and really, I don't get the joke. Where is the punchline? Yes, it's a woman wearing pants. Apparently, we are no longer in the Victorian era.

ThinkProgress gets it right in this brutally honest article:

Sometimes, it seems like the only option that would satisfy everyone’s demands about her wardrobe is for Hillary Rodham Clinton presented herself as a disembodied floating head.

When Clinton happened to wear a v-neck blouse under her blazer one time, she got roasted by the media for presenting herself too sexually. This Washington Post writer said:

With Clinton, there was the sense that you were catching a surreptitious glimpse at something private. You were intruding — being a voyeur. Showing cleavage is a request to be engaged in a particular way. It doesn't necessarily mean that a woman is asking to be objectified, but it does suggest a certain confidence and physical ease.

Whenever there is a "but" after the statement that a woman is not asking to be objectified, it's usually best to disregard whatever comes after that conjunction, because whatever contradicts that fact will most likely not enhance one's intelligence or understanding. In case you're still wondering whether this article sent a sexist message, read this line from the last paragraph:

To display cleavage in a setting that does not involve cocktails and hors d'oeuvres is a provocation.

Clinton can't win, whether she shows her body or hides it. But either way, she's not a three-year-old. Dressing herself is her prerogative, and the American people should know that by now.

It's as if we're back in the 1800s, when people thought female hysteria was actually a thing and used the phrase as a catchall term for any noticeable physical or mental state a woman had.

Even women fall prey to this one. Check out this Huffington Post article about Clinton's 2008 campaign by a writer who describes herself as a "feminist":

As an active feminist all my life, I see exactly where Clinton went wrong. She was using the old paradigm: To beat them (the men) you've got to be like them. Tough, aggressive, pragmatic. But what a difference it would have made if her campaign had employed some "feminine" qualities: compassion, conciliation, generosity.

Actually, Clinton doesn't have to strategically use her gender — or the comfortable stereotypes that go along with it — to do anything, even if doing so might get her more votes. She has the right to have whatever personality she truly has.

9. Women Are Too Soft To Get The Job Done

Showing that the argument that menstruation somehow makes women incapable of rational thought is alive and well, Clinton has been attacked for showing emotion on the campaign trail. When Hillary got emotional discussing how passionate she was about America, the media jumped on her tail like she had conceded something. It was as if she had finally admitted that she was a woman and therefore especially prone to breaking down in tears. Actually, male Presidents cry all the time — President Obama has cried publicly a few times — and it never jeopardizes their credibility as politicians. Emotions are human, and being human is good for a President.