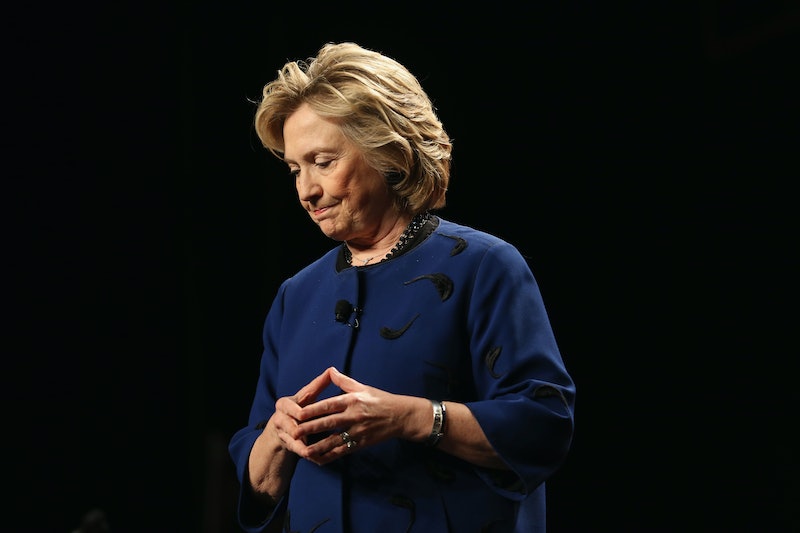 Millions of women across the country celebrated Sunday when Hillary Clinton announced she's running for president. After all, a woman in the White House means we have someone in the White House protecting women's rights, right? But, of course, before those millions of women head to the voting booths on Nov. 8, 2016, they need to be truly informed of how and whether Clinton as a commander-in-chief will really protect their interests. So it's inevitable that many are now wondering after she announced her candidacy: Is Clinton pro-choice?

It's not difficult to find out the answer. Mostly because Clinton has been a staunch pro-choice advocate for some time, even if her focus was directed elsewhere during her time in the White House as First Lady. Though her husband, former President Bill Clinton, campaigned back in 1992 with a pro-choice stance — insisting that "I believe the decision on abortion should be the woman's, not the Government's" — Clinton's discussions surrounding women's rights in the mid-1990s focused on abuse perpetrated against women overseas and reducing the rate of teenage pregnancies through education. And though she used the word "choice" in 1999 when outlining her position on family planning, advocating that access to "reproductive health services" would be necessary to quell women dying because "governments were making the decisions women themselves should have made" and spoke at the National Association for the Repeal of Abortion Laws (NARAL)'s 30th anniversary, Clinton really amped up her support for pro-choice causes in the early 2000s, while running for New York Senate. As she said during the campaign:

I want New Yorkers to know that I am and always have been pro-choice, and that it is not a right that any of us should take for granted ... There are a number of forces at work in our society that would try to turn back the clock and undermine a woman's right to choose, and we must remain vigilant.

Also noting that, "I have always been pro-choice and my position has never changed, and never wavered," Clinton kept that promise after being elected New York's State Senator, and held onto it during a speech to New York State Family Planning Providers in 2005... sort of. Though Clinton, in her speech, reiterated her support for Roe v. Wade, she also appealed to pro-life constituents, pushing for "people of good faith to find common ground in this debate — we should be able to agree that we want every child born in this country to be wanted, cherished and loved." Some criticized her words, but others saw her speech as smart strategy ahead of the 2008 election, which she was likely to run in. (And though she had argued against late-term abortion restrictions, she said during her run for New York Senate that "I can support a ban on late-term abortions, including partial-birth abortions, so long as the health and life of the mother is protected.")

And she continued to advocate for reducing the number of abortions through family planning — realizing, as The New York Times notes "shifting the debate to family planning is a way for the Democratic Party to gain an upper hand over Republicans," during her 2008 run. During the Sojourners Presidential Forum in 2007, Clinton mimicked her previous words on the subject following a question about whether pro-lifers and pro-choice advocates could ever reach a common ground.

That is what I have tried to both talk about and reach out about over the last many years in talking about abortion being safe, legal, and rare. And by rare, I mean rare. And it's been a challenge, because the pro-life and the pro-choice communities have not really been willing to find much common ground. And I think that is a great failing on all of our parts ... What concerns me is that there's been a real reluctance for anyone to make a move toward the other side for fear of being labeled as turning one's back on the moral dimensions of the issue from either direction.

Video of the moment here:

But what has Clinton said about abortion ahead of her 2016 presidential run? Back in 2009, while working as Secretary of State, her answer to Republican Representative Christopher Smith's question about where the Obama administration's opinions lie regarding reproductive health and abortion, Clinton very clearly outlined her continued support for pro-life causes.

As she said at the time:

I deeply respect your passionate concern and views which you have championed and advocated for over the course of your public career. We obviously have a profound disagreement ... Keeping women and men in ignorance and [denying] the access to the services actually increases the rate of abortion. During my time as First Lady, I helped to create the campaign against teenage pregnancy. And while we were working to provide good information, access to contraception, and decision-making that would enable young women to protect themselves and say no, the rate of teen pregnancy went down. I'm sad to report that after an administration of eight years that undid so much of the good work, the rate of teenage pregnancy is going up ... And we are now an administration that will protect the rights of women, including the rights to reproductive health care.

Video of the moment below:

Again, as you notice during her response, Clinton repeated the "safe, legal, and rare" line that she had been pushing for years.

Clinton's words so far have proven that the presidential candidate is still decidedly siding with pro-choice advocates — at the United Nations for International Women's Day in 2014, Clinton claimed abortion restrictions slowed progress.

There is one lesson from the past, in particular, that we cannot afford to ignore: You cannot make progress on gender equality or broader human development, without safeguarding women’s reproductive health and rights. That is a bedrock truth.

But her "safe, legal, and rare" stance is now coming under some scrutiny ahead of the 2016 election. As Jessica Valenti wrote in The Guardian about Clinton's repeated phrase, "'safe, legal and rare' is not a framework that supports women's health needs: it stigmatizes and endangers it." Continues Valenti:

We can focus on keeping abortions safe and legal. We should also work harder to make sure they're affordable, accessible and judgement free. But let's not bolster anti-choice rhetoric and activism by calling for them to be "rare" – especially since there are so many working to ensure that "rare" is an enforced standard, not just a talking point.

Still, a new campaign requires a new rallying cry, so there's still time for Clinton to tweak her messaging to avoid implying judgment towards abortion. Especially since Clinton's views and platform are so pro-woman — the candidate has advocated for Plan B access, better child care, and equal pay, and even fought last year's controversial Hobby-Lobby bill, which she called "deeply disturbing." (And, no, Sarah Palin, it's unlikely that Clinton will change her stance on abortion because she recently became a grandmother.)

Should Clinton tweak her "safe, legal, and rare" messaging to better reflect her mission? Well, then that's something the millions of women cheering her candidacy can truly celebrate.