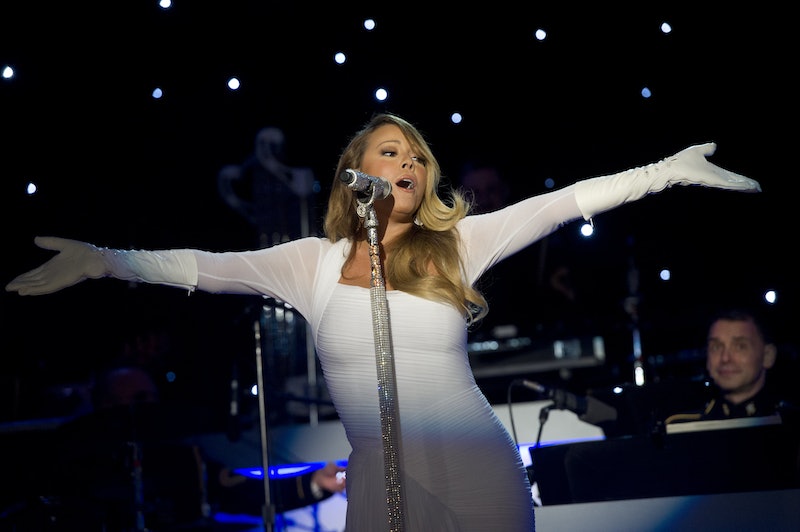 Taylor Swift is pop music's reigning queen these days. Her album 1989 is a smash hit and its singles own the airwaves. But the lead single "Shake It Off" has a rival from 10 years ago — Mariah Carey's "Shake It Off" from her album The Emancipation of Mimi. Both songs are about, well, shaking off those bad times and pesky exes, as well as having similar choruses ("Shake, shake, shake it off," says both songs). Billboard has pointed out that Swift's shaking tune debuted a No. 1 on the charts last year, while Carey's premiered at No. 2 back in 2005. But outside of chart performance, how do these two tunes measure up to each other?

It's also worth noting that this isn't the first time Swift and Carey have had similarly-titled hit songs. Carey's monster hit of 2005 was her comeback tune "We Belong Together," which debuted at No. 1. Four years later, Swift's No. 2 sensation was "You Belong With Me." Are these two always on each other's tails? I guess that's just how it goes in pop music.

Thus begins the ultimate battle of the "Shake It Off" tracks, Tay-Tay vs. Mariah/Mimi/The Elusive Chanteuse. I'm going to score 'em each on three criteria: Music video, lyrics, and, well, the shakability to those songs.

The video has a sultry start with Carey lying naked in a bathtub filled with water and rose petals, singing about how she's gotta shake off this game-playing dude. Next, she's lounging on a table in a fancy dining room while talking on the phone in a robe. The whole video has a flashy, glamorous vibe and Carey even literally shakes it off in front of giant light-up letters that spell out "MIMI."

I'm pretty sure the world is well-versed in this video by now, but just in case — Swift playfully travels through many dance genres like hip-hop, twerking, ballet, and Lady Gaga-esque as she shake, shake, shakes off her critics.

Carey rhymes about heartbreak and leaving her cheating man smoothly with a lot of grace, girl power, and Louis Vitton.

Swift's song is more about not caring what her critics say about her rather than getting away from an ex — although there's plenty of other tunes about that on 1989. Her track relies on some cliches and colloquialisms to get her point across, which isn't the most creative and poetic route.

Winner: Mariah Carey. Carey has always had an irresistible way with words.

Carey's is more of a slow R&B tune than a hardcore booty shaker. The song was co-written and co-produced by Jermaine Dupri, who was influenced by Usher's Confessions album.

"It’s got a lot of ingredients to it because I never thought that Mariah could make a bouncy type of record," he told MTV News. "When you hear that song — the whole bounce of the record and the way she’s flipping it and the stuff she talking about … I knew that record was gonna go just because you never heard Mariah talk about this stuff."

Swift's track is straight up pop, which was a departure from her previous country-sounding hits. She also spends pretty much her entire music video shaking and dancing. The song is the sunniest 3 minutes currently on the radio and has had listeners shaking along to it since its debut on the charts in 2014.

Winner: Taylor Swift. She can really get down to that sick beat.

Looks like Tay-Tay's won this battle, but don't worry, Mariah — there's still time for more music and shaking it off.