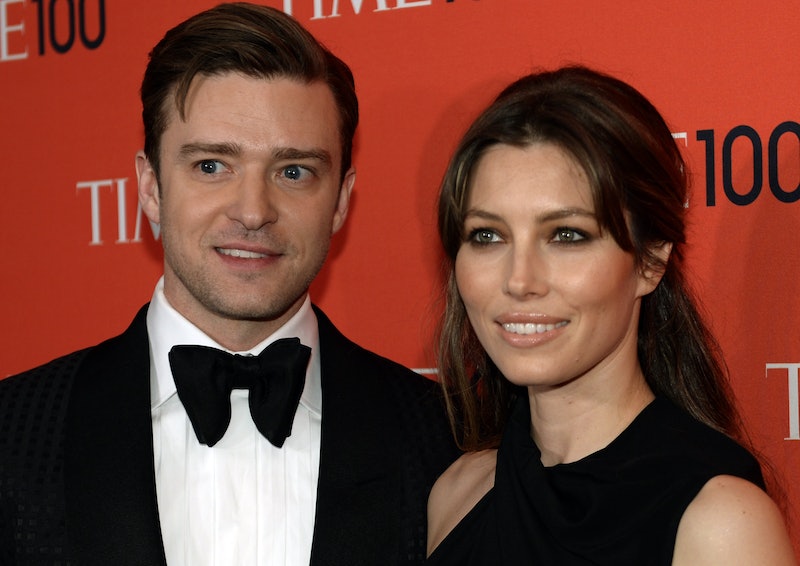 In "Oh My God, I Can't Believe The Cuteness" news, People confirmed Saturday that Justin Timberlake and Jessica Biel welcomed their first child, a son, named Silas Randall Timberlake. If you didn't immediately let out the biggest "awww!" in response to that news, I'm not sure what's wrong with you. I mean, they're decidedly one of the cutest Hollywood couples around, so it stands to reason that their kids are going to end up just as adorable, right? Right. Glad we're agreed on that.

While the proud parents are said to be "ecstatic" about their new arrival, they're understandably keeping most of the details about their bundle of joy under wraps — so the details we've got are slim to none. However, it's worth thinking about one of the bits of info we have been given, and that's their son's name.

Silas Randall Timberlake isn't too out there as far as Hollywood baby names go, but it's definitely unique enough to make you wonder if there's a special significance behind it. It's modern, yet not particularly popular — after all, how many people named Silas have you met in your life? — and it's no doubt a great name. But, what does it all mean?!

Let's deal with Mini Timberlake's first name first. According to BabyNames.com, Silas is a name of Latin origin that means "Man of the Forest". Huh, no special meaning there. A search through Timberlake and Biel's history (read: plugging their names into Google along with the name "Silas") led me to an A&R exec named Silas White who worked with Timberlake the beginning of his solo career — as revealed in an unofficial Timberlake biography, White was apparently the man who helped get Timberlake's first solo album, Justified, off the ground. While I'm sure Timberlake was grateful for the boost, I kind of doubt this was the man responsible for Timberlake and Biel's name choice.

The name Silas is also Biblical, though — Silas was a missionary companion of Paul and Timothy. The American definition of the name also offers an alternate meaning, which is "three, or the third." Again, I'm really grasping at straws with this by wondering whether this has any meaning to Timberlake and Biel, but it's still worth considering.

When it comes to Silas' middle name however — Randall — it's a bit easier to figure out the inspiration. After all, Timberlake's father's name is Randall, and it's rather traditional to name your child after a parent. Incidentally, Randall as a middle name seems to already have been passed down, since it just so happens to be Justin's too! Pretty neat, and a really nice nod towards his family.

While we probably won't find out what inspired Timberlake and Biel to name their son Silas for a while — you know someone will ask the couple in an interview at some point, though — there's one thing we do know right now: they're an adorable little family, and the baby is going to be super loved. Congrats to the couple!

More like this
The History Of Taylor Swift's "All Too Well" & What The Lyrics Actually Mean
By Jake Viswanath
9 Photos Of Celebrity Couples & Unexpected Duos At The 2023 Grammys
By Jake Viswanath
Meghan Trainor & Daryl Sabara Are Expecting Their Second Baby
By Jake Viswanath
Adam Levine & Behati Prinsloo Welcome Their Third Child Together
By Jake Viswanath
Get Even More From Bustle — Sign Up For The Newsletter
From hair trends to relationship advice, our daily newsletter has everything you need to sound like a person who’s on TikTok, even if you aren’t.