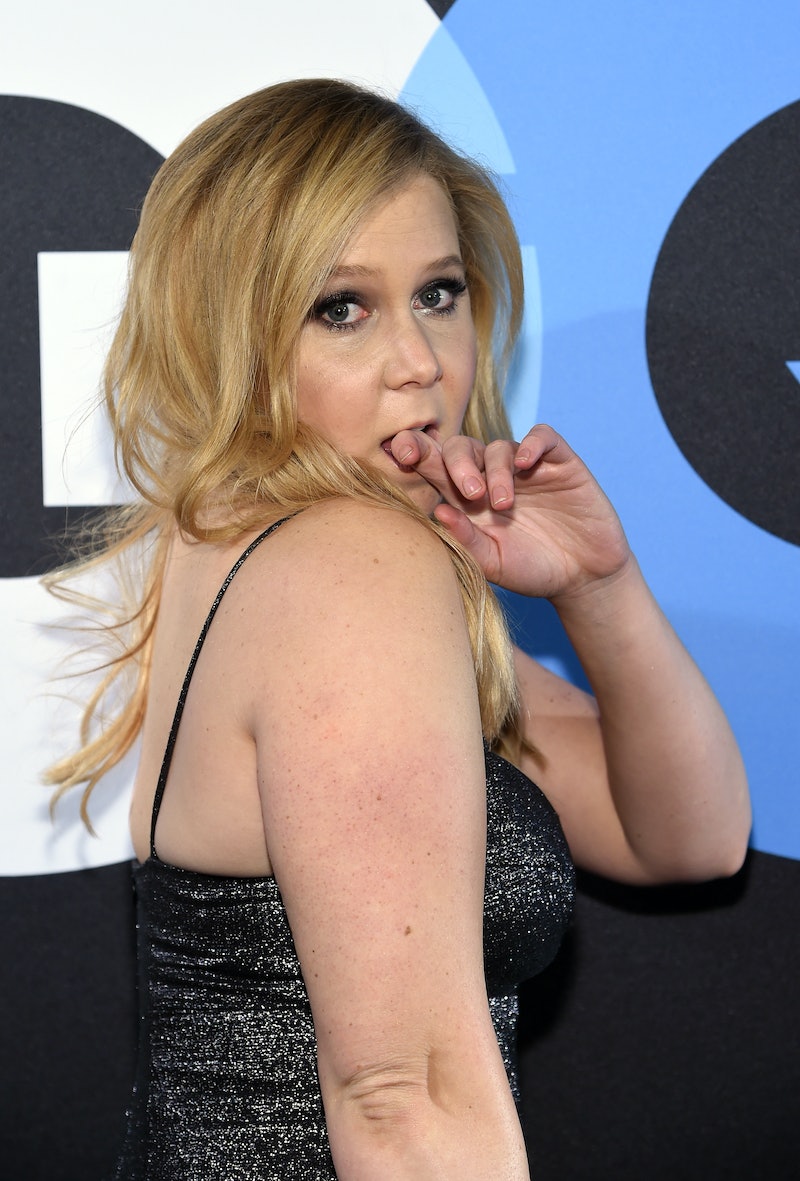 I might be a huge fan of Amy Schumer, but even I am willing to admit that she is an acquired taste. Although Schumer is the host of the MTV Movie Awards in 2015, she is like most shock comedians in that she pushes the envelope as far as she can — which can either be hilarious or offensive depending on her audience. Her opening montage featured a parody of several beloved films from the past year, so rapidly that it was almost hard to follow them all — almost — and that turned out to be one of the best parts of her routine. As soon as she hit the stage — in the middle of a dance routine that she was simultaneously afraid of and eager to participate in — the real comedy began.

She began with a spoof of Boyhood that ended with a bird pooping on her face, and then shifted right into a Pitch Perfect parody that featured her being yelled at by Aubrey and Chloe in full flight attendant chic. From there, she found herself in Divergent — though, sadly, she had "lost her divirginity (that's the butt one, right?)" a long time ago. Next, she met J. K. Simmons for a violent Whiplash encounter, crashed her way into Hazel Grace's The Fault In Our Stars support group, and was dressed for the MTV Movie Awards by The Hunger Games' Effie Trinket herself.

Once Effy sent her on up to the stage, Schumer continued her strong start with hilarious jokes that poked fun at the MTV network in a truly epic way. "I don't want you to worry about your speeches going too long," she assured the potential winners. "Because MTV is the one network that refuses to play music." Zing. She then proceeded to riff on everything from MTV's programming to Kevin Hart's frequent movie appearances. (Because he is literally everywhere these days.)

Gone Girl, how good was Gone Girl? Such a good movie. If you didn't see it, it's the story of what one crazed white woman, or all Latinas do, if you cheat on them. That's a fact.

J. Lo's face says it all. Thankfully, that single joke wasn't enough to ruin an otherwise strong set that had an even stronger finish. "And, of course, I have to mention the big news today. After months of speculation," she began, drawing premature applause from the audience who assumed she was referring to the fact that Hillary Clinton is running for president in 2016. Oh, how naive we were. "Hillary Clinton finally announced she's taking Zayn's spot in One Direction. The first woman in One Direction. I never thought I'd see the day! This is going to be the party of the year; I just hope Harrison Ford doesn't crash it."

BRB, still dying of laughter. Raise your hand if you, too, are now looking forward to Hillary Clinton as the next member of One Direction. Just me? Okay, bye...