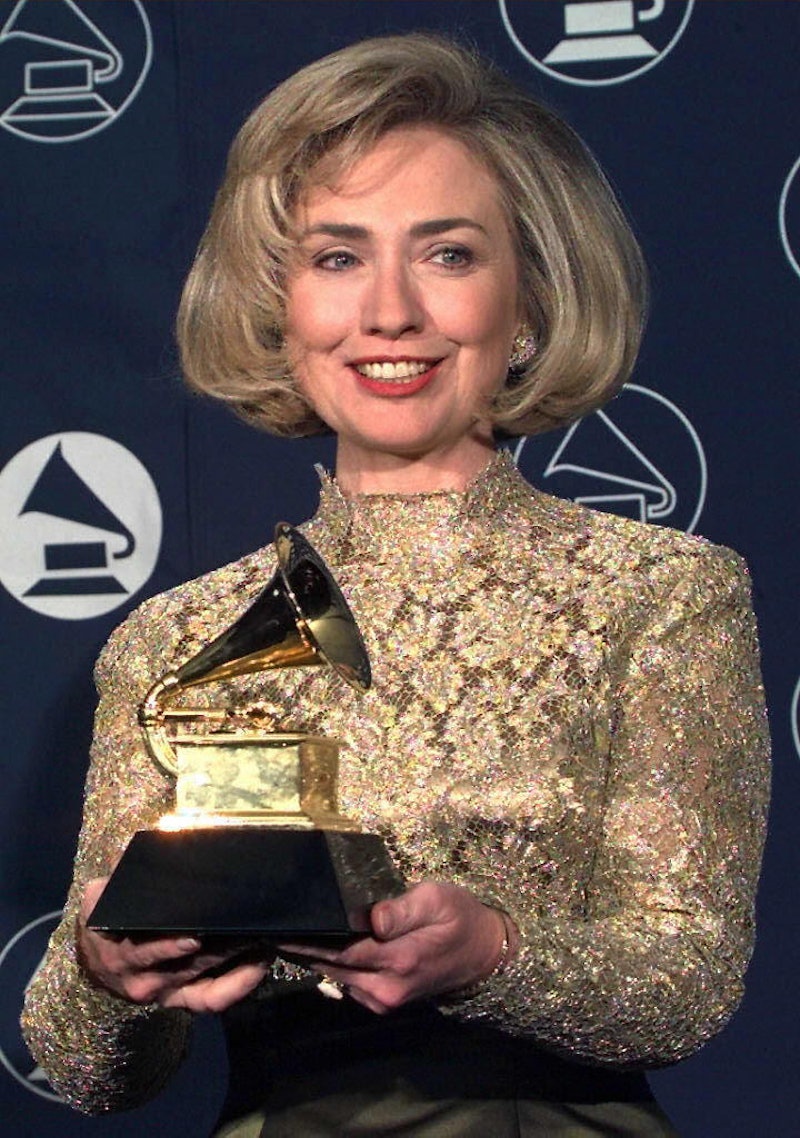 It's official: Hillary Clinton has announced she's running for president in 2016. You know, in case you haven't heard it everywhere, because it's kind of a huge deal. Being that I write about fashion here, there's no better excuse than this to reminisce on all the times she made history in outfits that were equally memorable. The presidential nominee is well-versed in scrutiny for the way she looks — which is the unfortunate truth for all women who are visible public figures. Even though she's been busy doing things like winning Grammys and being the Secretary of State, for instance, she's been scrutinized for the way she does her hair and the cut of her suits. Yes, seriously.

No matter your political affiliation, you have to admit that reducing a woman to her appearance when she's in a position of great power and influence — or ever — is lazy and inappropriate. There's nothing wrong with being a smart, accomplished, powerful woman who also loves fashion. It's not the clothes that are the problem, but that the political and news media criticizing a woman's appearance serve as a mechanism to undermine her authority and objectify her in a way that a man wouldn't normally have to deal with.

Polls have been calling Clinton the top contender for weeks before she even announced her intentions to run — and while that may change and she might not even end up as the Democrats' candidate, there's a chance that the United States will be getting its first female president. It would be historic, but unfortunately I doubt it will change the archaic double standard and the blatant sexism of appearance policing women in power.

So, H. Rhod, on the day of your historic announcement, here are 15 times you looked great through history — but most importantly, times you were racking up accomplishments:

1. When She Was More On-Trend Than You Were

Oh, that '70s look? Already did it, already killed it. Also? She was named on the list of "The 100 Most Influential Lawyers in America" twice by National Law Journal.

2. When She Rocked This Belted Frock

Clinton looked effortlessly early '90s fashionable in this white, short-sleeved dress — but she was also awarded the United Arab Emirates Health Foundation Prize for her advocacy in regards to health care reform and health care as a human right.

3. When She Wore Pink Co-Ords With Glam Details

This two-piece suit with all its gold is totally chic with the right amount of '90s trendy. She was also given Albania's Mother Theresa Award for her humanitarian work for the people victimized by the conflict in Kosovo.

4. When She Made Headbands Look Boss

One of her signature looks, Clinton totally picked "a thing" and made it hers. There was also that time she won the President’s Vision & Voice Award from The American Medical Women's Association for her work in women's health.

5. When She Wore These Pants

Not afraid of a stripe or becoming a trailblazing leader, she was the first woman to be a faculty member at The University of Arkansas' School of Law.

6. Seriously, Hillary Is Way More On-Trend Than You

Athleisure, you say? Oh, already nailed it. She was also instrumental in passing The Adoption and Safe Families Act and helping create better mechanisms for children in foster care to transition to adulthood.

7. When She Wore An Illusion Dress Before It Was Cool

She looked stunning in this gown that you can now find a version of at pretty much any store. Hey, the woman's a trend-setter! The more important influence, though? Securing over $20 billion for the cleanup and redevelopment of the World Trade Center site.

8. Every Single Time She Wore A Monochrome Pantsuit

Clinton's rainbow of "power suits" is now legendary, but not as important as her work to give access to medical care to military reservists even when they weren't on active duty.

I'm so in love with this glam and elegant gold cape. Almost as in love as the National Women's Hall of Fame was with Hill when they inducted her in 2005.

10. When She Made Long Blazers Her Signature

Clinton's worn many variations of the long blazer in her equally long political career, nearly as many times as she's been an advocate for women and girls' rights. That's why the International Center For Research on Women gave her their Champions of Change Award.

Yeah, Hillary looks amazing in gold and olive but she also won a Grammy for Best Spoken Word Album, for an audio book recording of her book It Takes A Village: And Other Lessons Children Teach Us in 1997. A Grammy, you guys.

12. When She Attended Her First Inauguration

That sparkly navy gown was stunning — almost as stunning as the fact that she's been on Forbes ' list of "The World's Most Powerful People" nine times.

13. When She DGAF About The Tabloids And Wore A Ponytail

Hey, when you're the Secretary of State sometimes there are more pressing matters than a blowout. I mean, Time did name her one of the 25 "Most Important Women of The Past Century."

14. When She Wore A Flower Crown

While you're at Coachella, just know that Hillary already wore a flower crown better. Sorry. Oh, she's also been on American's "most-admired person" list 18 times while topping it as the most admired 17 times.

15. When She Made You Wish Your Texts Were From Her

Taking care of business with her signature sunglasses in this now iconic photo, she's now the best shot the U.S. has ever had at having a female president. It's going to be a wild year of candidacy, but being president would undoubtedly be her biggest accomplishment.