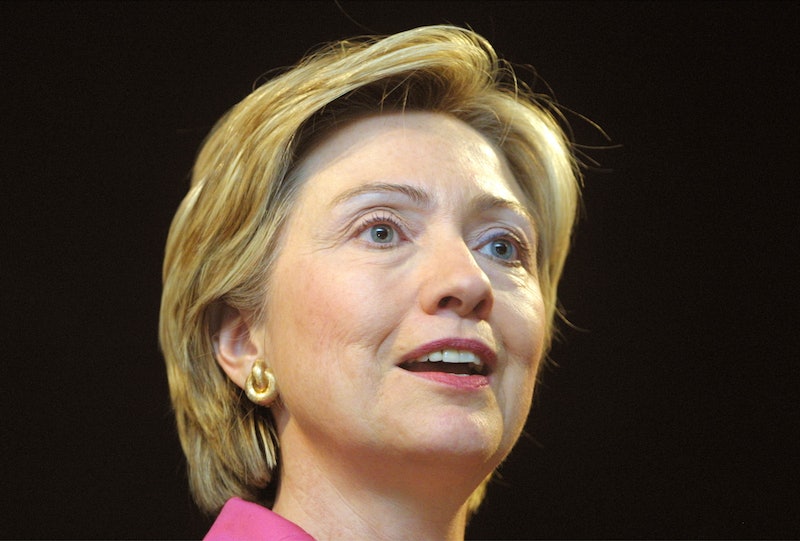 Before the rumors started on Hillary Clinton’s second presidential campaign, she published two memoirs: Living History came out in 2003, during her term as a senator in New York, as well as Hard Choices, published in 2014 after her term as U.S. Secretary of State. Both books offer profound insights on how Hillary Clinton's confidence and how she draws courage and strength while maintaining a high-profile lifestyle in American politics.

On Sunday, Clinton launched her second U.S. presidential campaign. According to The Washington Post, as early as Tuesday, she will "visit Iowa and other early primary states to meet and greet voters in restaurants and other modest venues. A former secretary of state, U.S. senator and first lady, Clinton enters as the prohibitive favorite among Democrats while also polling far ahead of any potential Republican rival now on the scene.”

I went back through those two books in search of lessons Clinton shared with her readers on self-esteem and self-love. In her own inimitable words, here are six lessons Clinton can share with us today on how to love ourselves and live up to our full potential:

"I approach my work with confidence in our country's enduring strengths and purpose, and humility about how much remains beyond our control." - Hard Choices: A Memoir (2014)

2. Never give up on yourself during the tough times

"I didn't hit my stride as a Wellesley student right away. I was enrolled in courses that proved very challenging. My struggles with math and geology convinced me once and for all to give up on any idea of becoming a doctor or a scientist. My French professor gently told me, "Mademoiselle, your talents lie elsewhere." A month after school started, I called home collect and told my parents I didn't think I was smart enough to be there. My father told me to come on home and my mother told me she didn't want me to be a quitter. After a shaky start, the doubts faded, and I realized that I really couldn't go home again, so I might as well make a go of it." - Living History (2003)

3. Be active in the struggle to liberate both yourself and others

"... Wellesley emphasized service. Its Latin motto is Non Ministrari sed Ministrare -- "Not to be ministered unto but to minister" -- a phrase in line with my own Methodist upbringing. By the time I arrived, in the midst of an activist student era, many students viewed the motto as a call for women to come more engaged in shaping our lives and influencing the world around us." - Living History (2003)

4. Be prepared to leave behind the familiar and embrace the world

"I had not even considered leaving the Midwest for college... All the girls seemed not only richer but more worldly than I. One girl at the Wellesley event was smoking pastel-covered cigarettes and talking about her summer in Europe. That seemed a long way from Lake Winola and my life. I told my two teacher mentors that I didn't know about 'going East' to school, but they insisted that I talk with my parents about applying. My mother thought I should go wherever I wanted." - Living History (2003)

5. In moments of hardship, reach out to your community for strength

"Of all the thousands of gifts I received in my eight years at the White House, few were more welcome and needed than these twelve intangible gifts of discernment, peace, compassion, faith, fellowship, vision, forgiveness, grace, wisdom, love, joy and courage. Over the coming months and years, these women faithfully prayed for and with me. I appreciated their concern and their willingness to ignore Washington's political divide to reach out to someone in need of support." - Living History (2003)

6. Strength, money and knowledge — we cannot do anything without them

"Like the rest of the continent, South Africa still has to deal with overwhelming poverty, crime and disease, but I was encouraged by the hope I saw in the faces of students... And when I gave a speech on a dusty patch of land at the edge of Cape Town, I met women who were actually building a better future for themselves and their children... I loved a line from one of their songs that translated roughly as 'Strength, money and knowledge -- we cannot do anything without them.' Good advice for women everywhere." - Living History (2003)

More like this
On TikTok, #SeñoraEra Shows Latinx Users Becoming Their Mothers
By Natalia Perez-Gonzalez
Christina Aguilera Took A Powerful Stand At Brighton Pride
By Sam Ramsden
Scotland's First Period Dignity Officer Has Sparked Backlash
By Darshita Goyal
4 Zodiac Signs Most Affected By The August 2022 New Moon
By Brittany Beringer
Get Even More From Bustle — Sign Up For The Newsletter