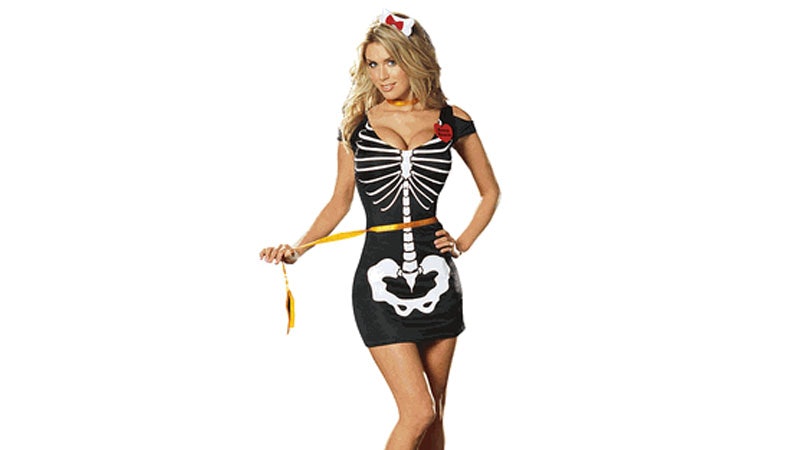 We thought Halloween 2014 would only involve the usual amount of insensitive cultural appropriation and incredibly sexually objectifying costumes. But our favorite holiday may be back to one of its most offensive old tricks. "Anna Rexia," a costume that was pulled from New York costume-and-beauty store Ricky’s in 2011, has reappeared on costume website HalloweenParty13.

The costume consists of a skeleton-print mini-dress, a measuring tape worn around the waist, a removable "Anna Rexia" badge, and a bone-shaped headband. The costume's description reads, "You can never be too rich or too thin."

Back in 2011, carriers of the controversial costume were pressured by costumers and eating disorder awareness groups to stop selling it. A new Change.org petition has just been created to protest the resurgence of the offending costume and already has over 30,000 signatures.

“Would you sell a ‘Cancer Patient’ costume, complete with bald cap and hospital gown?” writes Josie Aquino, a commenter on the Change.org petition. “It is inhumane to both glamorize and minimize the severity of a disease that claims lives on a daily basis.”

An estimated 8 million Americans suffer from eating disorders, and one in 200 American women suffers from anorexia. Eating disorders have the highest mortality rate of any mental illness, according to the petition.

The good news about the Anna Rexia costume is that despite its reappearance, it may not be for sale. HyperVocal found no secure payment available for the costume, and the manufacturer, Dreamgirls International, says production of the costume was stopped in 2007. HalloweenParty13.com is apparently "under construction," so it's tricky to figure out whether the costume was really on offer again this year. Was a wholesaler attempting to unload an offensive back order, or was someone at HalloweenParty13 just playing a tasteless prank? Either way, let's hope the Anna Rexia costume is no longer actually available.