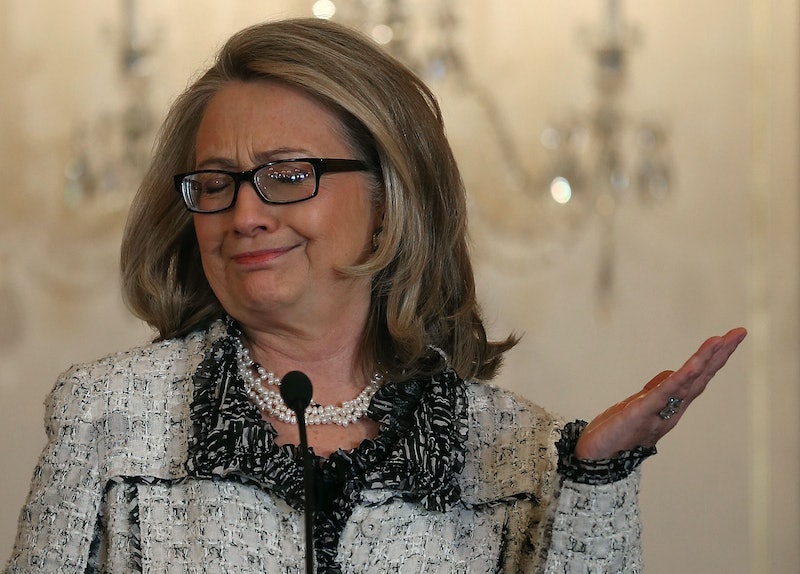 Unlike most of America, Hillary Clinton still hasn’t made her stance on marijuana entirely clear. Last year, Clinton told CNN that she wanted to “wait and see” what research delivered on the issue before she took a clear-cut stance. But considering the fact that 58 percent of Americans now feel strongly about the legalization of marijuana, Clinton’s indecisiveness on the issue could actually do her campaign some harm.

According to a recent poll by Quinnipiac University, in three key swing states — Pennsylvania, Ohio, and Florida — the legalization of marijuana is actually more popular than any of the contenders in the 2016 presidential elections, The Washington Post reports. And while the legalization of recreational marijuana is just slightly ahead of Clinton in the polls, it’s still ahead. However, that’s far better than Marco Rubio and Ted Cruz, who are beat out by marijuana legalization by more than two-to-one.

Overall, 80 percent of people in the three states that were polled support the legalization of medical marijuana, and support for legalizing recreational marijuana tops 50 percent in all three key swing states. With this widespread support and the ever-increasing changes to laws in various states, the issue is bound to make a splash on the ballot in 2016. The prevalence of that issue means more Democrats and young people turning out the polls.

While that should be good news for Clinton, her ambivalence on the issue at this point makes marijuana proponents wonder if she’s the best candidate to fight for the cause, CNN reports. Previously, Clinton has been entirely unsure about marijuana. In 2008, Clinton spoke out against the decriminalization of marijuana, and just last year she described marijuana as a gateway drug.

However, as Bustle’s Chris Tognotti points out, Clinton’s hesitance to fully embrace this issue is completely characteristic. On the issue of same-sex marriage, Clinton waited until 2013 and for Obama to speak up before she disclosed her opinion. While thinking before speaking is always a good idea, especially in the political sphere, Clinton’s cautiousness might not be such a good game plan in this instance. After all, speaking out in support of marijuana legalization would only further mobilize a base that Clinton already has a pretty firm hold of.

But based on the few hints of her opinion that we’ve gotten so far, it’s looking likely that Clinton’s answer on the issue will be a "yes." When she was in Colorado recently, she joked about the foam on a latte looking like a marijuana leaf. Moreover, in recent years, she hasn’t shut down the question entirely, but just said that more evidence is needed before moving forward.

Considering the studies so far — and polls on the rest of the countries attitudes on legalization and the widespread Democratic and youth support of it — Clinton will likely be moving forward on the issue sooner, rather than later.