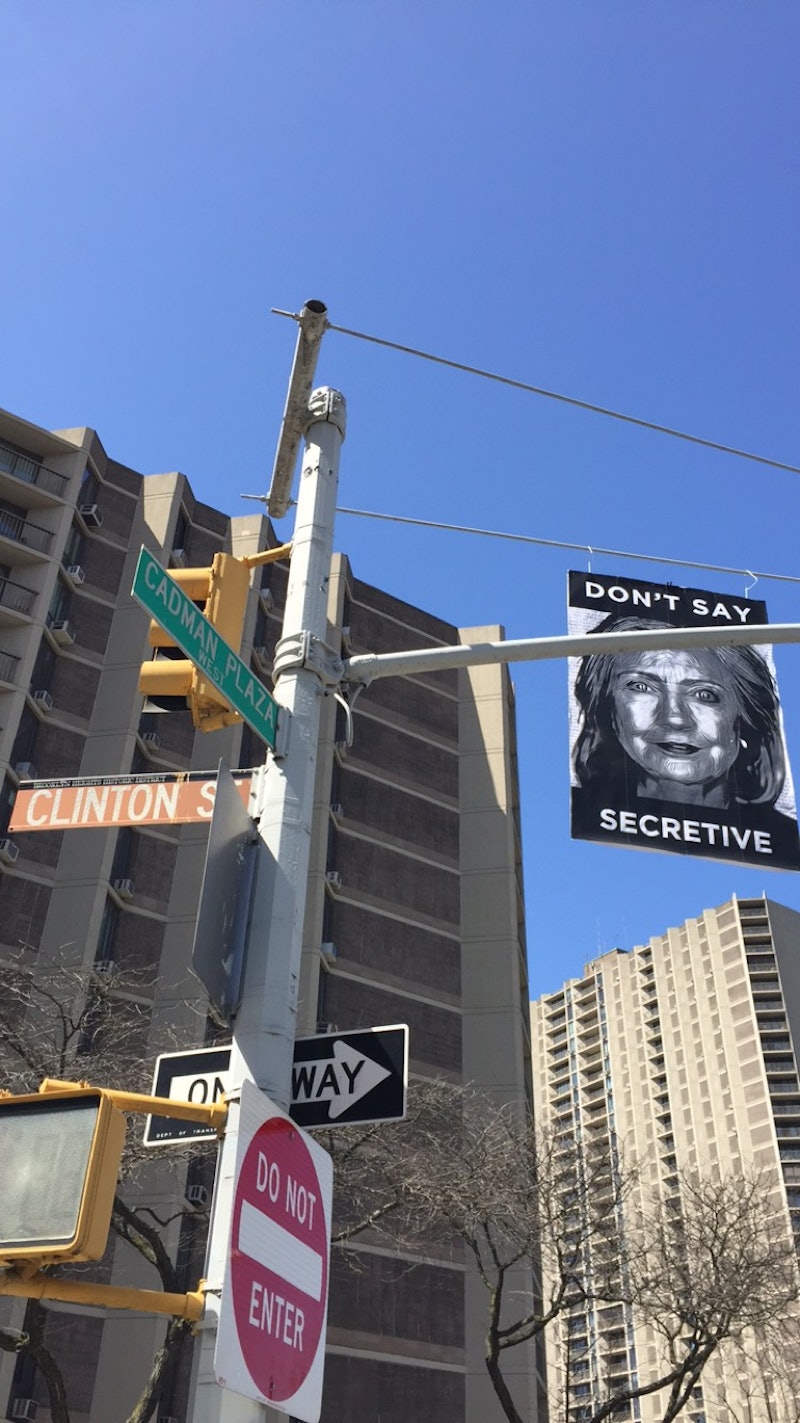 Last week, CNN reported that Hillary Clinton will base her presidential campaign headquarters in Brooklyn, New York. An anonymous street artist in the neighborhood hasn't taken kindly to his potential new neighbor. Saturday night, anti-Hillary Clinton street art started popping up all over Brooklyn. The art depicts Hillary in black and white in a somewhat oil paint effect flanked by the words "Don't Say" at the top of the poster and a mix of either "Entitled," "Ambitious," or "Secretive" at the bottom. The background around Hillary's face has other adjectives apparently meant to describe her, which include everything from "calculating" to "inevitable."

Rather than targeting criticism lodged against her, the art appears to be targeting Hillary supporters who defend her against such disparaging language.

Recently, Time interviewed neighborhood residents on Hillary's campaign moving in, and how they felt about her in general. Of the five people quoted in the Time piece, all cited an increase in traffic as a potential negative — but only one person explicitly said they were against Hillary and would rather a different candidate be running for president. Art dealer Philip Stevenson was the sole detractor, telling Time that Hillary's big campaign move to Brooklyn "means more inconvenience, more traffic, more hassle, but she doesn’t care. You can write that I find her loathsome."

The art itself and the style of the posters is eerily similar to the "Quarantine Shaheen" street art that began popping up all over New Hampshire just last November, which targeted Democratic Senator Jeanne Shaheen's thoughts on handling the Ebola crisis, a hot button issue she debated with rival senate candidate Scott Brown, who lost against her in the 2014 election. The artist of the Shaheen posters has yet to be publicly identified, nor have they come forward; likewise for the artist of the anti-Hillary posters.

It's surprising that both posters target prominent political women. Even more surprising is the use of the word "ambitious" in a potentially derogatory way. Ambition denotes someone who is goal-oriented and not only sets high standards for themselves, but hopes the same for others. Ambitious people see the bigger picture and actively chase after creating that reality. Ambition is an admirable trait for a politician, especially someone who is, you know, running for president.