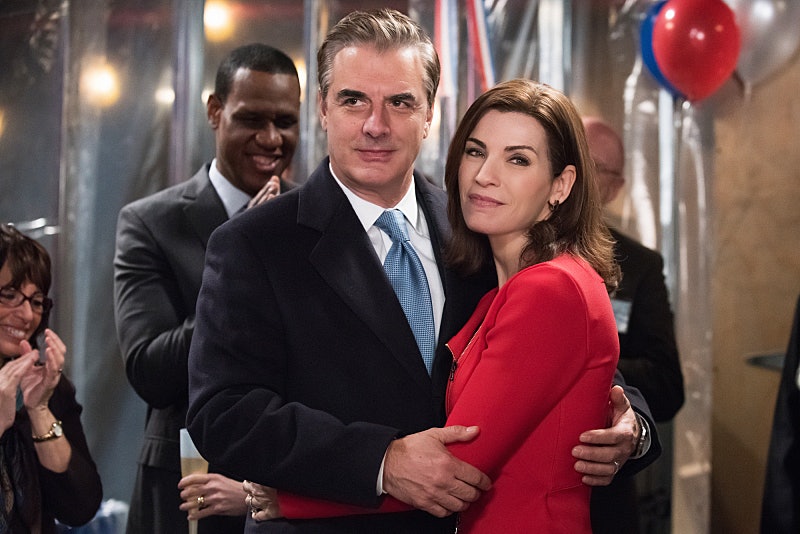 This changes everything: On Sunday night's new episode of The Good Wife , "Winning Ugly," Alicia Florrick was told to step down as state's attorney by Democratic National Committee chairman Frank Landau. If you'll recall, last week, Alicia was accused of "stealing" the election. The DNC was afraid that a recount might affect the outcome of other key races on the ballot, and because they can't risk losing their supermajority in the Illinois Senate, they need Alicia to withdraw her name (even though she did absolutely nothing wrong). Her political career is over before it even began. Imagine that.

In the preview for the next episode, Alicia is shown announcing her resignation at a press conference with Peter by her side. The image of the two of them recalls a similar image seen in the show's very first episode — only this time, their roles are reversed. Now, Alicia is the disgraced politician and Peter is the "supportive" spouse in the background. How interesting.

So, where does the series go from here? What will Alicia do now that her reputation has been tarnished? I'm not exactly sure — but I'm really looking forward to finding out. I think watching Alicia try to repair her "brand" during the final three episodes of Season 6 will be fascinating. Apparently, she's going to look to Peter for help.

The public can, at times, have a pretty short memory when it comes to political scandals, so I don't think Alicia is finished yet... this is just a bump in the road for her. Granted, it's a really big bump, but I don't think it's insurmountable. I have to believe she's going to find a way to bounce back.

Just when I think I have The Good Wife figured out, the writers always seem to throw me a curve ball. They definitely know how to keep viewers on their toes.

More like this
Are John Legend & Kanye West Still Friends? The Singer’s Latest Update Is Candid
By Brad Witter
Christina Aguilera Took A Powerful Stand At Brighton Pride
By Sam Ramsden
'Scream’s Courteney Cox Has Broken A Major Horror Record
By Sophie McEvoy
Jane Lynch Revealed Why She’s Leaving 'Funny Girl' After Lea Michele Was Cast
By Grace Wehniainen
Get Even More From Bustle — Sign Up For The Newsletter