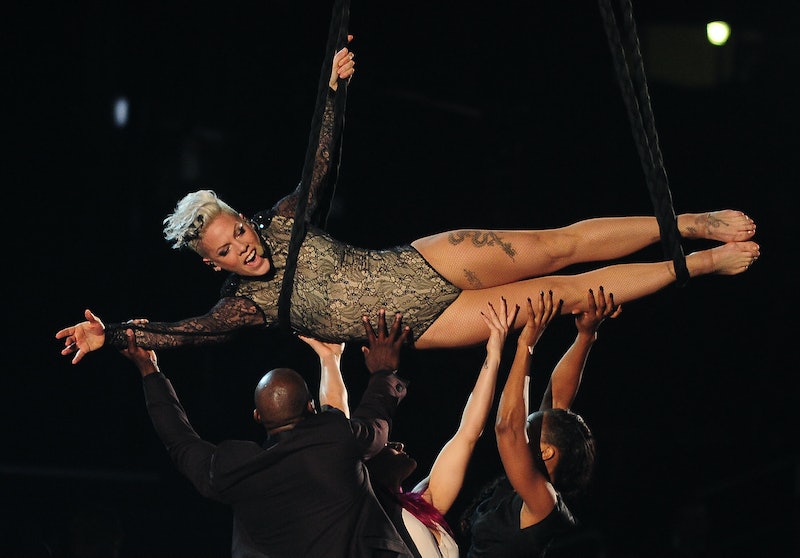 Pink basically has a Ph.D. in not taking crap, and this situation is no exception. Following some recent Twitter criticism that the singer came under about her weight, Pink told social media fat-shamers off with class and a sense of humor. Major props to her.

Some annoying individuals on the Internet believed that it looked like the singer had gained some weight when she appeared at the John Wayne 30th Anniversary Odyssey Ball. The singer attended the cancer benefit on Saturday evening to support her friend, cancer research advocate Dr. Maggie DiNome. It looks like Pink enjoyed herself, save for some pesky fat-shaming that certain people felt like it was their civic duty to engage in. (No. Just no.)

In response, she sent out a series of tweets calling out the small mindedness of the comments. She admitted that her daughter asked her why she was "so squishy" while grabbing her belly, to which Pink replied "b/cuz I'm a happy baby." She also posted a picture of herself and husband Carey Hart, with the caption "and my hubby says 'it's just more to love baby' (and then I smack his hand off my booty cause we're in a supermarket)." And in a lengthy screen-grab, Pink explained that she felt "beautiful," and was taking a much-needed break in her bionic woman workout schedule.

In other words, enjoy life, eat the damn cheesecake. Here she is at the benefit, looking chic, gorgeous, and TOTALLY NORMAL in a little black fit-and-flare dress.

This is yet another example of the standards that society imposes on women (especially ones in the public eye) to satisfy society's idea of physical perfection. Even if she was packing a little more cushion though, so what?! (to borrow her lyrics). She feels beautiful, confident, and healthy, and that's all that matters. Plus, there are far more pressing issues on Earth than the non-problem of Pink taking a break from her workouts. Cancer, for instance.

Kudos to Pink for refusing to take people's ignorance, knowing just how beautiful she is, and dropping a truth bomb on the small-minded fat-shamers. She's truly an inspiration to us all. Also, I may start to end all forthcoming correspondence by signing off as cheesecake. It's a pretty genius signature.

More like this
Gemma Collins' Net Worth Is Only Going Up
By Catharina Cheung
In Rap Sh!t, Social Media Has Main Character Energy
By Aramide Tinubu
Jennifer Coolidge Needs 'Legally Blonde 3' To Happen So She Stops Getting Hot Dog Jokes
By Jake Viswanath
Amanda Matta Isn't Afraid To Spill Royal Family Tea On TikTok
By Hayley Schueneman
Get Even More From Bustle — Sign Up For The Newsletter