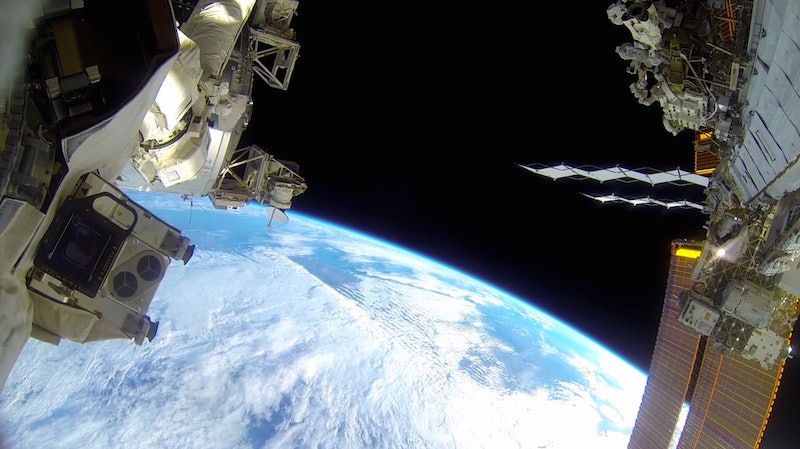 Thanks to a GoPro camera and a tech savvy U.S. astronaut, those of us on Earth can catch a glimpse of what it's like to go to space. NASA astronauts filmed two spacewalks outside the International Space Station (ISS) and after it was uploaded last week, the video has gone viral. While they worked on the ISS suspended in the atmosphere, the astronauts had an incredible view of Earth that they shared with us non-astronauts.

NASA astronaut Terry Virts, who filmed the video, launched into space November 23 as the commander for Expedition 43. The footage was taken during two EVAs (extravehicular activities) outside the ISS during which Virts and fellow astronaut Barry “Butch” Wilmore routed cables and installed several antennas for the Common Communications for Visiting Vehicles system known as C2V2. Spacewalks are obviously extremely dangerous considering the lack of gravity and pressure. According to NASA, astronauts must put on their pressurized suits hours before the spacewalk, breathing pure oxygen to eliminate the nitrogen in their bodies that could cause gas bubbles when they enter space.

The first EVA, filmed on Feb. 25, was the second for Virts and third for Wilmore. During EVAs, astronauts do what's called a spacewalk, meaning they're outside of the spacecraft in the void of space. The two men were outside for nearly seven hours during this spacewalk. The second EVA filmed, on March 1, lasted five and a half hours. Astronaut Virts has now spent a total of 19 hours outside during spacewalks and Wilmore has spent nearly 26 hours outside. Luckily for us, the video was edited down to only an hour.

The video begins with the astronauts getting ready for the spacewalk and you see the men floating around the spacecraft in normal clothes. It then switches to Virts in a full spacesuit ready to go out into space. Thanks to the GoPro, space selfies are now a thing, but the acoustics in space must not be ideal because it's impossible to hear what Virts and Wilmore say at the beginning of the video.

Wilmore, the commander of Expedition 42, was in space from Sept. 25 to March 11, along with two Russian cosmonauts, and is now back on Earth. Virts joined the team two months later with another Russian cosmonaut and a European Space Agency astronaut and won't return until May. Wilmore has been a NASA astronaut since 2000, logging 178 days in space during two missions. Virts also joined NASA in 2000 and is in space for the second time.

More like this
What Is Ben Affleck's Net Worth? At 50, The Oscar Winner Makes 8 Figures Per Film
By Meg Walters
Why Eurovision 2023's Host City Won’t Be Revealed For A While Yet
By Sam Ramsden and Rachel Mantock
13 Photos Of Princess Charlotte Loving The Commonwealth Games
By Sam Rogers
Everything To Know About 'The Hunger Games' Prequel Movie
By Grace Wehniainen and Radhika Menon
Get Even More From Bustle — Sign Up For The Newsletter