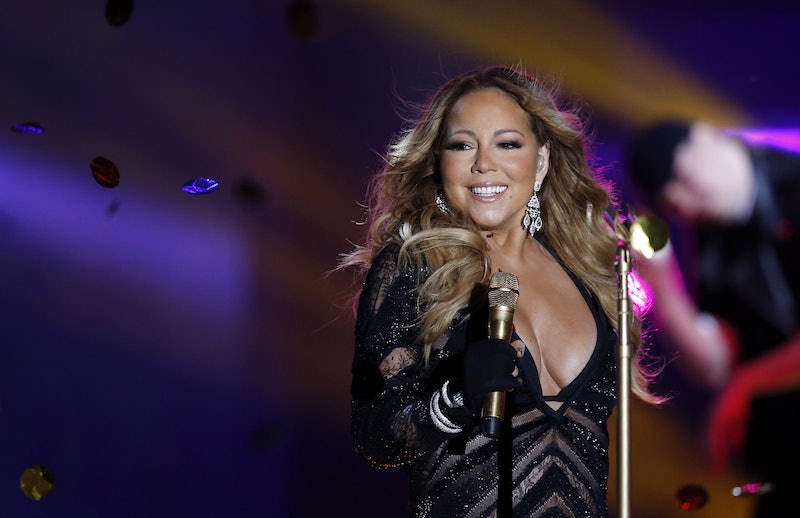 On Monday, it was announced that Mariah Carey's #1 to Infinity — a collection of her No. 1 hits — will be released on May 18. How exciting! But it gets even better: Carey's new single, "Infinity," will precede the set on April 27. Wow, what a great time to be a part of the "lambily." Carey has earned a whopping 18 No. 1 singles over the course of her career — more than any other solo artist in the history of the Billboard Hot 100 chart. (For comparison, Michael Jackson has 13 and Madonna has 12.) That's quite an accomplishment!

Though I poked a little fun at Carey during the somewhat disastrous rollout of her last project, Me. I Am Mariah... The Elusive Chanteuse, she really is one of my favorite artists of all time. (Daydream is the first album I ever bought when I was just eight years old.) If you ask me, she's one of the greats.

So, in honor of the impending release of #1 to Infinity , I decided to rank all 18 of Carey's No. 1 singles to date. It was a tough job (and I know not everyone will agree with my choices), but someone had to do it!

Carey's vocals are top-notch (as always) on "Love Takes Time," but for some reason, the song has never really "clicked" with me.

No offense to Joe and 98 degrees, but I think "Thank God I Found You" would sound so much better if it were a solo track.

This is a nice rendition of the Jackson 5 classic.

I'll probably catch some flack for ranking "Vision of Love" outside of the top 10, but the chorus doesn't really go anywhere in my opinion.

"Don't Forget About Us" is kind of like "We Belong Together Part 2." Obviously, it's not nearly as powerful, but I still dig it.

"My All" is a wonderful ballad.

I'm a sucker for inspirational pop cheese like "Hero." I can't help it.

"Touch My Body's" lyrics are pretty ridiculous, but they're a big part of what makes the song so much fun.

The whistle notes Carey hits in "Emotions" are incredible!

If listening to "One Sweet Day" doesn't make you feel something, you're not a human being. Sorry.

"Honey" is so catchy (and no, I don't think it's about what you've heard it's about).

I wanted to swing on that tire swing from the "Always Be My Baby" music video so badly. Oh well. Someday. (Get it?? I'll see myself out.)

More like this
An Ultimate Guide To The Music Of 'Rap Sh!t'
By Brad Witter
What Is Ben Affleck's Net Worth? At 50, The Oscar Winner Makes 8 Figures Per Film
By Meg Walters
What Is Megan Thee Stallion’s Net Worth? The Traumazine Hitmaker Isn’t Worried About A Budget
By Hugh McIntyre
Megan The Stallion’s “Anxiety” Song Shouts Out Britney Spears & Whitney Houston
By Grace Wehniainen
Get Even More From Bustle — Sign Up For The Newsletter