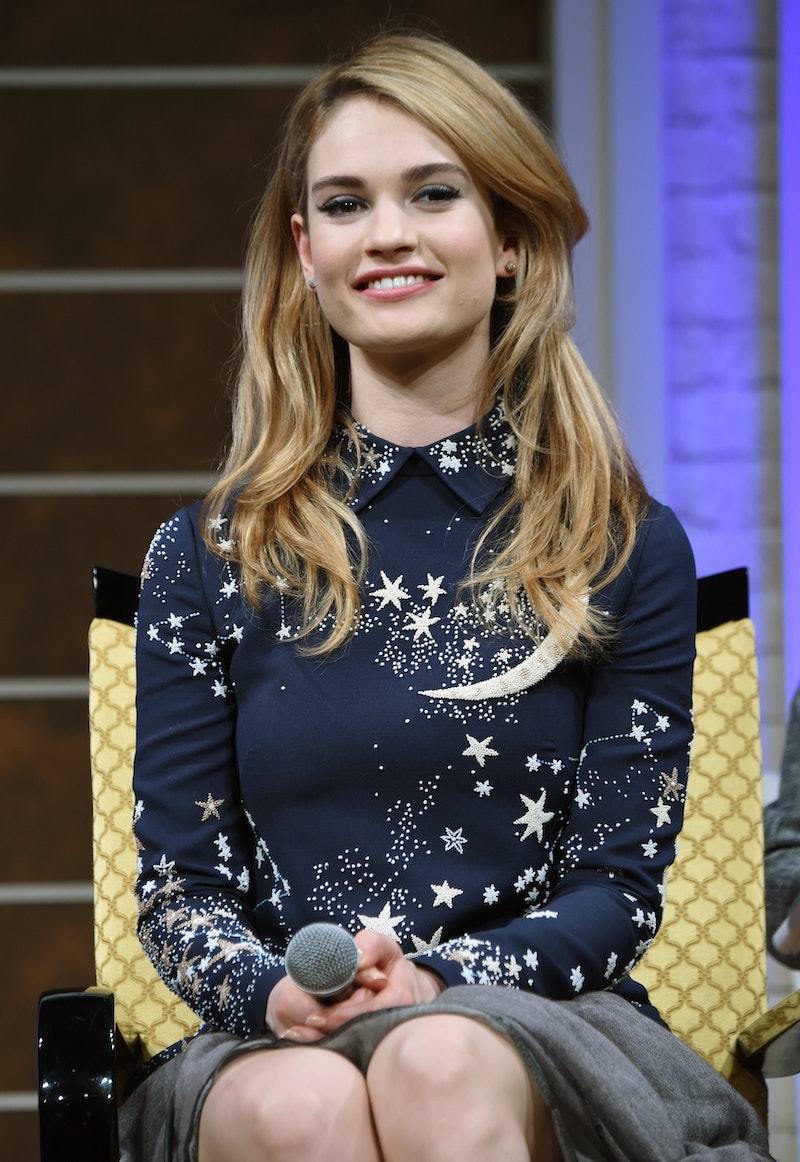 As a fashion/beauty writer, I kind of live for a good press tour — and The Press Tour To Rule All Press Tours may just have been Lily James' for Cinderella, the live-action version. Not only did it span three continents and several different countries over the course of a few months, it also featured a very impressive fashion batting average — because pretty much every single outfit she wore was a home run. I don't think I have to tell you that's rare — I mean, look at Jennifer Lawrence's combined Hunger Games premieres, or Kristen Stewart's roller coaster of red carpet wins and losses throughout her run for Twilight: James completed the near-impossible, and knocked every single dress out of the park... so let's rank them!

Ranking the dresses was no easy feat — largely, because they're all so good. I mean, how does star-printed Valentino compare to pink ruffled Elie Saab? How does Mary Katrantzou with ballerinas and iguanas do in a face-off with an elegantly-buttoned white Dior paired with an Olympia Le-Tan book clutch? What about boho lacy Erdem and ladylike Prada? The girl has major fashion range (not to mention major fashion guts), so let's see how things stack up!

13. At The 'Cinderella' Exhibition

Even her casual wear is off the charts.

12. At The Mexico City Photo Call

If you look closely, you can see the storybook print, which is adorably on point.

11. At The Milan Photo Call

What would a press tour be without at least one bombshell red dress?

10. At The Mexico City Premiere

The stud detailing gives this pretty-as-a-picture dress some nice edge.

9. At the Milan Premiere

She's quickly becoming known for her Cinderella-appropriate ball gowns, but she can also rock a funky print like nobody's business.

8. At The Berlin Premiere

Another day, another princess dress.

7. At The London Premiere

6. At The Berlin Press Conference

I just can't get over the iguana/ballerina print — I mean, how cool is that?

5. At The Moscow Premiere

4. At The Toronto Premiere

Dior, with a major assist from Olympia Le-Tan (how perfect is her clutch?).

3. At The Tokyo Premiere

Ah, the dress heard round the world: It's about as princessy as you can get without going over the top — Elie Saab knows what's up.

2. At The Tokyo Press Conference

Combining a galaxy print with a mod, '60s-inspired mini dress was true genius on the part of the designers over at Valentino.

1. At The Los Angeles Premiere

Quite possibly the most beautiful dress, ever.