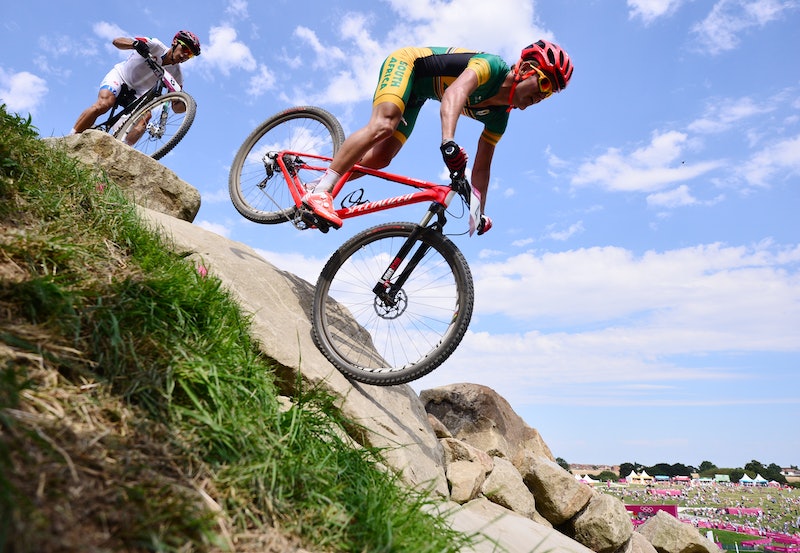 Some people are adrenaline junkies. Other people, like me, I like to curl up on the couch and watch Netflix with some ice cream. I'll narrate the hell out of a movie though, so watch out. Mountain biker Claudio Caluori, potentially a secret comedian, narrated his descent down a terrifying bike run and it's absolutely hilarious to behold. I'd love to have him come hang out with me one night, and do MY version of extreme sports, and hear what he has to say about the Fast & Furious movies as we're marathon watching them. That is, if I could get him to settle down: At the start of the video, he announces he's just been biking in Canada and Switzerland, and is now in France for the UCI Mountain Bike World Cup. Well, look at you go, you little over-achiever.

Some of my favorite moments are when the course gets a bit intense and Claudio cries out, "Oh no, this is steep! Ack!" in a kind of very matter of fact way that doesn't do justice exactly how terrifying hurtling down the bike track actually looks. When he makes big jumps, he gleefully exclaims, "Oh yes, it worked, it worked!" and he calls the other French rider "Frenchie", which is weirdly endearing. Watch the entire comedic run below, and feel your anxiety about the dangerous course and lighting fast speed melt away with the hilarious narration:

1. This dad who narrates every roller coaster he goes on

More like this
9 Unmissable Moments To Relive From The Commonwealth Games
By El Hunt
8 Epic Must-See Moments To Relive From The Lionesses’ Euros Win
By El Hunt
Lewis Hamilton Turned Down A Role In 'Top Gun: Maverick' For This Surprising Reason
By Darshita Goyal
25 Things I've Reduced My Life To, In Addition To WFH In My PJs
By Ginny Hogan
Get Even More From Bustle — Sign Up For The Newsletter