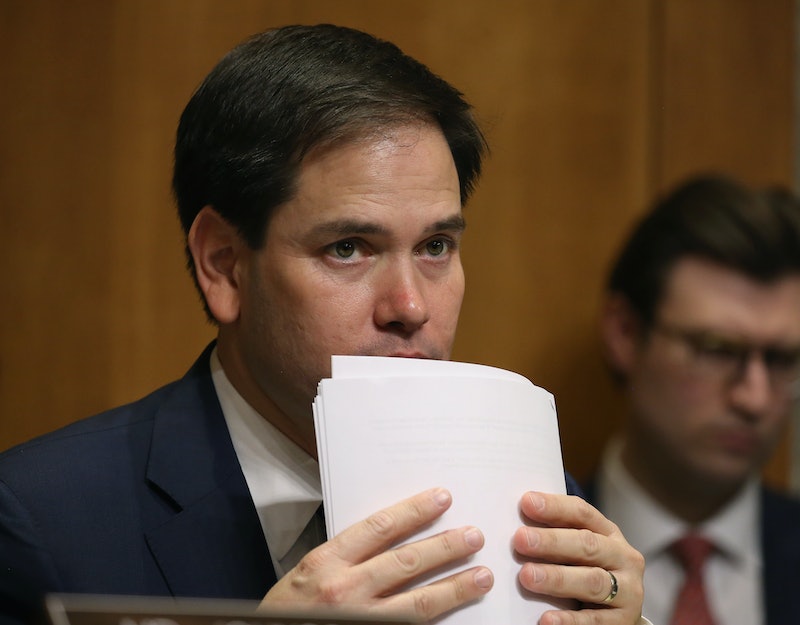 It's not a question of healthcare, employment, immigration, or foreign policy, but one topic on many young people's minds for the 2016 election is whether the new president will support legalized weed. Now that Marco Rubio has officially announced his candidacy for the Republican ballot, it's time to do some research. Where does Rubio stand on legalizing weed? Rubio has dodged questions about weed for years, only saying he is in limited favor of medical marijuana.

He has refused to answer the question of whether or not he has ever smoked marijuana himself, but despite all the hemming and hawing about his own personal experiences, Rubio's official stance on recreational marijuana is clear and not surprising:

The broader issue of whether we should be legalizing it is something I'm pretty firm about. I don’t think legalizing marijuana or even decriminalizing it is the right decision for our country.

In 2014, Rubio told ABC and Yahoo News' Politics Confidential that he will never answer the question of whether or not he has ever smoked weed. He won't even deny that he has ever used pot, a response that might seem totally innocuous. Why not? He fears that no matter what response he gives, he will stir up negative consequences. On the one hand, if he claims he has never smoked pot, Rubio thinks people won't believe him. But if he says he has used it, he worries that the American youth will use his anecdote as proof that smoking weed is completely fine and they should do it all the time.

Here’s the problem with that question in American politics. If you say you did, suddenly there are all these people saying "Well, it’s not a big deal, look at all these successful people who did it." On the other side of it, if you tell people that you didn’t, they won’t believe you.

Here is a clip of Rubio not answering the question in a similar fashion.

While much has been made of the refusal of Rubio and other politicians to say whether they have ever smoked weed, perhaps the best interpretation of his remarks comes — no surprise — from Stephen Colbert. Colbert's analysis of Rubio's non-answer can be summed up in one sentence:

When it comes to the question of whether he's ever smoked pot, Rubio's official position is he would like to be president.

So it's pretty clear that Rubio wants nothing to do with pot, and believes recreational marijuana isn't in the future if he has any say in it. The question becomes, how does he feel about medical marijuana use? Rubio supports it in theory, as long as it does not induce a high and is only used for pain alleviation purposes if possible.

If there are medicinal uses of marijuana that don't have the elements that are mind-altering or create the high but do alleviate whatever condition it may be they are trying to alleviate, that is something I would be open to.

However, even if weed is legalized only for specific medical uses, Rubio is still concerned that many people are using it as a "ruse" to get high, showing how he's developed his current stance on weed.

You've seen how this has been abused in many parts of this country.