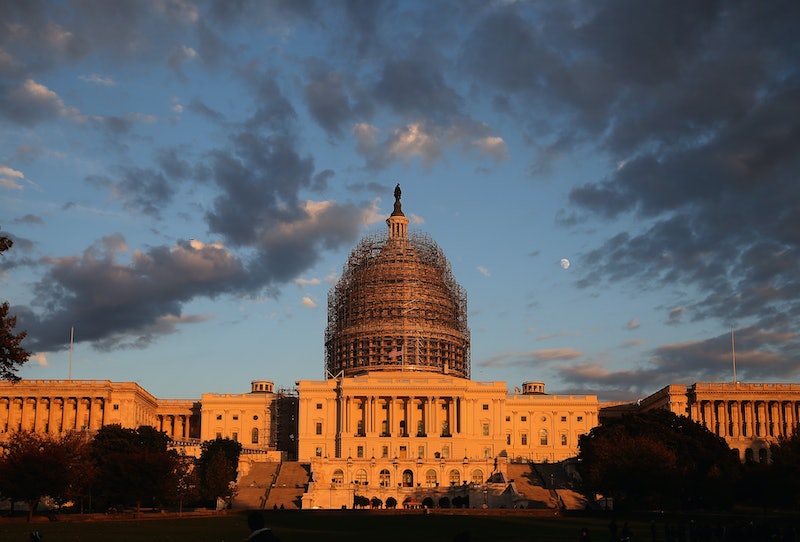 It's only April, but 2015 has already seen a staggeringly high of number of anti-abortion laws and restrictions. Both federal and state legislatures have taken major steps backwards for women's reproductive rights so far in 2015, making it increasingly harder for women to seek safe and legal abortion care. In the first quarter of 2015, legislatures in all 50 states collectively introduced 332 provisions aimed at restricting abortion services, compared to 335 during the entire 2014 legislative session, according to the Guttmacher Institute. Needless to say, politicians have intensified their attacks on women's right to choose and it's going to be a gruesome year if this trend continues.

The Guttmacher Institute reports that of the 332 provisions introduced on the state level by April 1. 53 have been approved by a legislative chamber and nine have already been enacted. We can add two more restrictions enacted in April to that number, totaling 11, so far this year.

Arkansas was the main offender, passing six new restrictions on abortion care in just one month— but it's a nationwide problem, as the hundreds of restrictions introduced came from 43 states. At the federal level, conservative politicians tried to sneak anti-abortion language into a human trafficking law and a bill that would prohibit federal funding for abortions (including Medicaid coverage) passed through the House and is now in the Senate.

Amanda Allen, state legislative counsel for the Center for Reproductive Rights, believes there's such a large increase in anti-abortion laws this year because it isn't an election year. When state legislators are running for office, they typically tone down their restrictions on women's rights. "We have been under a sustained assault since 2010 midterms elections and lost a lot of ground in the states," Allen says.

In response to the influx of anti-abortion laws nationwide, Cecile Richards, president of Planned Parenthood Federation of America, tells Bustle:

This reckless legislation forces doctors to provide care that's based in politics, and not medicine. Make no mistake: Politicians are not doctors, yet politicians have written these laws with the end goal of banning safe, legal abortion. Planned Parenthood will continue to fight for women's health and rights with everything we've got. Because a woman's right to make personal medical decisions about abortion shouldn't depend on her zip code.

This year hasn't been a total shipwreck — states like New Mexico, New Hampshire, and Mississippi have defeated abortion restrictions — but the overall losses far outnumber the victories.

Here's a breakdown of women's reproductive rights losses of 2015 so far...

Six new abortion restrictions in Arkansas banned telemedicine abortions, doubled the mandatory waiting period to 48 hours, required abortion providers to tell patients that medical abortions can be "reversed" (following in Arizona's footsteps), cut public funding for providers, and removed the exemption to the state's parental consent law for victims of rape, incest, and sexual abuse. The updated parental consent law requires minors seeking an abortion without a parent's permission to file a petition in court.

"That’s an example of how it just goes way too far — putting up barriers and really endangering the health and safety of young women," says Kate Stewart, executive vice president for Advocates for Youth.

Arizona was the first state to pass a bill requiring doctors to tell patients that medical abortions can be "reversed" after the first of two pills is taken. Medical professionals have classified this as "junk science" and according to an article by Planned Parenthood's vice president for external medical affairs, Dr. Vanessa Cullins, the national groups behind these "reversal" laws are the same groups that claim rape can't lead to pregnancy.

Both Oklahoma and Kansas passed bills within the past two weeks restricting the safest and most common method for second-trimester abortions: dilation and evacuation abortions (D&E). Both states' legislatures refer to the method as "dismemberment" in an attempt to make it sound morbid, but the D&E method is actually safer for second-trimester abortions than a medical abortion. Allen sees these restrictions as yet another hurdle for women seeking an abortion. "I think we’re seeing this patchwork of laws intended to burden the patient and make it as difficult as possible for the provider to stay open, and that’s really become a one-two punch," she said.

Idaho also passed a bill restricting medical abortions this year, banning telemedicine for abortions. This means that a woman seeking a medical abortion must make another trip to the provider's office to receive the final pill for a medical abortion, as opposed to finishing the abortion at home. Increasing the number of trips a patient needs to take makes it significantly harder for women traveling long distances and lower-income women to seek the care they need.

West Virginia's lawmakers overrode the governor's veto of a bill to ban abortions starting at 20 weeks post-fertilization, making it the 18th state with this restriction. "I believe the legislation is constitutionally sound and represents the right public policy in our state," said West Virginia House Speaker Tim Armstead in a statement after the governor's veto. "It reflects the majority of West Virginians who believe that the unborn should be protected from feeling pain."

So, What's Coming Up Next?

H.R.7, the federal bill that would prohibit all federally funded abortions, was passed by the House and is now in the Senate. If passed, this bill would remove abortion coverage from federally funded insurance plans, such as Medicaid. The White House has said that Obama will likely veto H.R.7 if it's passed by the Senate, saying in a statement, "The legislation would intrude on women's reproductive freedom and access to health care."

The other problematic Congressional legislation is the proposed Justice for Victims of Trafficking Act, which was favored by both parties until Republicans sneakily added anti-abortion language into the bill. The newly added restrictions would prohibit human trafficking victims from using restitution money for abortions. Luckily many Democrats now oppose the potential law, but this type of maneuvering shows the desire to insert anti-abortion language into unrelated bills.