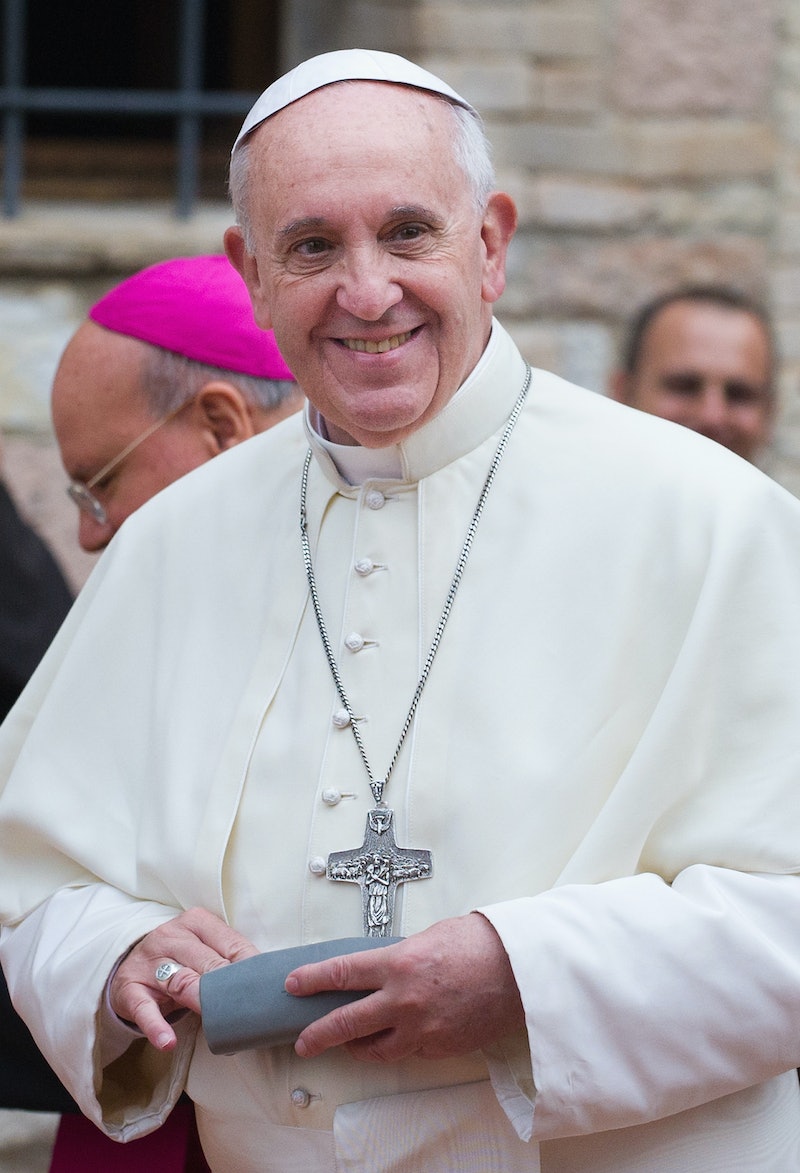 Pope Francis suspended the so-called "Bishop of Bling" this week following revelations that the bishop ordered a home renovation totaling $40 million. The Bishop, Franz-Peter Tebartz-van Elst, spent $20,000 on a bathtub and $35,000 on a conference table. The renovations on his residence in the diocese of Limburg apparently ended up costing eight times the projected cost.

NPR reports that on Sunday, the Pope preached:

"When a person is attached to money, he destroys himself, he destroys the family. Money destroys! It does, doesn't it? It binds you. Money serves to bring about many good things, so many works for human development, but when your heart is attached in this way, it destroys you."

This move is one of the latest by Pope Francis, who has taken to rehabilitating the beleaguered Church's image following years of sex abuse scandals and disenchantment over social issues. In his first months on the job, he washed the feet of female, Muslim prisoners as part of Holy Thursday. The Pope also responded to a letter sent to him by gay Catholics, and earned the nickname "Cold Call Pope" for calling people up out of the blue.

But we're left wondering: is a $5 million renovation for a man of God acceptable?

ICYMI, here are some of this week's other top stories in religion:

Thailand's top Buddhist, Supreme Patriarch Somdet Phra Nyanasamvara died at age 100 on Thursday. His presumed successor died earlier this year, leaving a void that will have to be filled by Thailand's King Bhumibol Adulyadej.

In New Jersey, a retired Catholic priest wed his male partner of 20 years in an interfaith ceremony after the state began allowing same-sex marriages on Monday.

A drug treatment facility tied to Scientology surrendered its license in Georgia to avoid criminal charges.

Brunei, a small nation nestled next to Malaysia on the island of Borneo, announced this week that it would implement a strict Shari'a code. Under the new laws, adulterers will be stoned to death and thieves will have limbs amputated.

Now, some most-read long form pieces from the last week:

Writing for the site Religion & Politics, Michael Schulson takes at Aish HaTorah ("Fire of the Torah"), an organization reaching out to young Jews from non-religious backgrounds and trying to bring them into the Orthodox fold. Though Schulson didn't find "brainwashing," as some warned he would, he found an organization presenting "a moderate image, even as it espoused an immoderate, politicized form of Judaism."

The New Republic looked at the New York Times 's newest columnist, Alaa Al-Aswany. Al-Aswany is one of Egypt's best-known novelists and is frequently considered a liberal voice in the embattled country. But TNR says the label is misguided: Al-Aswany promotes anti-semitic conspiracy theories and once said that "massive Zionist organization rules America."

Russia's "black widows" — Muslim female suicide bombers whose husbands often died in battle against Russian authorities — are the subject of a Foreign Policy piece by Yulia Yuzik. Yuzik notes that for the black widows, bombings are typically not rooted in revenge.

Its absence seems to indicate an emerging tendency in this type of terrorism, which can no longer be defined as an act of payback for the loss of one's home, property, or dignity; it is not a radical form of patriotism. From Asiyalova's case and others, it seems that suicide bombings have simply become the most convenient way to conduct a war by terror: one explosion, many victims, and lots of attention from the media.