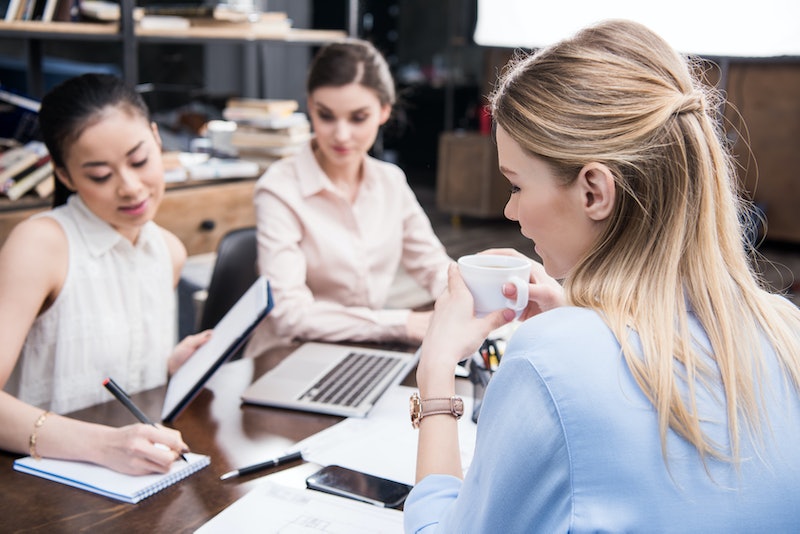 April 14 is not just any day in America. According to data from the government, it's the day that marks how far into the year a woman must work to earn the same amount that her fellow male colleagues made the previous year. Now, we mark April 14 as Equal Pay Day to highlight the persistent gender gap in wages for female and male employees. (Coincidentally, it's equal-pay activist Lilly Ledbetter's birthday, too.)

Paycheck inequality has had its truthers, its skeptics, and its naysayers. While the White House places the current gender wage gap at 77 cents per every dollar a man earns — with African-American women and Latinas earning 64 cents and 56 cents on a dollar, respectively — critics have pointed out that the statistics may be a manufactured myth. "[The gender gap] does not account for differences in occupations, positions, education, job tenure, or hours worked per week," Christina Hoff Sommers noted in a Daily Beast column in 2014, adding that the gap closes when "relevant factors" are taken into account.

However, researchers at the Pew Research Center continue to find that a gender wage gap does exist in America — and will most likely persist unless we do something about it. Pew research, which uses both full- and part-time earnings, places the current gender wage gap at 84 cents for every dollar a man makes; that gap closes to roughly 93 cents per dollar among young women who are recent college graduates.

The American Association of University Women also found that historically, women don't experience a significant gender gap in wages until they reach age 35, although a recent AAUW report notes that female college graduates may still earn up to 18 cents less than their male peers when working full-time for one year after graduating. From Graduating to a Pay Gap:

But once a woman hits her mid-30s, the gap in full-time earnings between male and female workers ranges between 75 and 80 cents on the dollar, according to AAUW research. This seems to be a constant problem among women, especially those with families.

Both Pew and the AAUW make it clear that when we talk the gender gap, we must talk age and family. According to a 2013 Pew survey, women are much more likely to take off from work and suspend their careers to have children than men, and women who are mothers are also more likely to say that time away has harmed their careers. Researchers have noted that this time away can significantly impact career earnings for women, which in turn can widen the gender wage gap as a women reaches both middle-age and her mid-career.

As we discuss the gender wage gap and whether or not it's a myth, it's important to remember that these lifetime earnings are linked to workplace policies that don't always accommodate pregnant women or working mothers. While women and men essentially begin their careers at the same level in 2015, it's evident women are more likely to be asked — or even pressured — to alter their careers and give up some of their earnings for having a family. And as that same Pew survey found, more than half of all working women with children under 18 said being a working parent has made it harder to advance in their career, compared to just 16 percent of men with children.

Women, especially millennials, may be performing well in the workplace in 2015, but have we reached our egalitarian workplace utopia? Not just yet.

More like this
Which Cast Member of 'Westworld' Season 4 Has the Highest Net Worth?
By Meg Walters
'The Capture' Is Finally Back – & S2 Looks Tense AF
By Sophie McEvoy and El Hunt
The Lionesses Are Calling For Equal Access To Football In Schools
By Sophie McEvoy
What Is Megan Thee Stallion’s Net Worth? The Traumazine Hitmaker Isn’t Worried About A Budget
By Hugh McIntyre
Get Even More From Bustle — Sign Up For The Newsletter