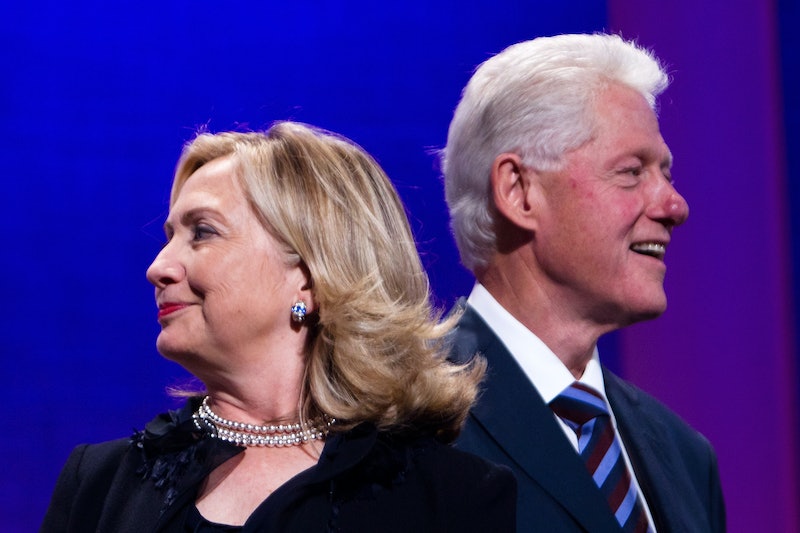 For some people, it’s strange to think of Hillary Clinton as being anybody else but, well, Hillary Clinton. Hillary’s last name is so ingrained in her public persona that it’s easy to forget that she took on her husband’s last name (you know, the guy who used to be President of the United States) and wasn’t just born Hillary Clinton, pantsuit-clad and Blackberry in hand. But for others, the name Hillary Clinton is just an archaic piece of baggage from her First Lady days. Baggage that the former Secretary of State and former senator from New York no longer needs. For that group, the name “Hillary Rodham Clinton” strikes more resonance. According to NPR, it was the latter group that suffered a major let-down Sunday when Clinton didn't use her maiden name when she announced she was running for president.

One of the unwritten rules of marrying the President of the United States seems to be that no matter what, you have to check your maiden name at the White House front door, at which point it basically evaporates from the public’s memory. For example, it might have taken you a bit longer than you would liked to remember that Michelle Obama’s maiden name is Robinson. A game of “Guess that First Lady’s maiden name” pre-Michelle and pre-Hillary is pure bar trivia territory.

In the case of Hillary Rodham Clinton, she put up a longer, more complicated fight than most to keep her maiden name. A freshly minted Yale law graduate who had just finished a stint on the House committee to investigate President Nixon, Hillary kept her maiden name when she and Bill got married in October of 1975.

According to a 1994 profile of Hillary in The New Yorker, problems with Hillary’s maiden name cropped up when the young couple moved to Arkansas and Bill began campaigning for governor. Bill's then-campaign director Rudy Moore explained to The New Yorker:

She did not do so much on the campaign trail that year. A woman was expected to smile, and not give speeches. And the name issue was in the forefront.

Hilary argued that it was her professional name, according to The New Yorker, and the campaign didn't think it was a big enough deal to push her to change it. When Bill Clinton became the Governor of Arkansas, it seemed like Hillary keeping her maiden name was no longer an issue. Unfortunately, that was far from the truth, according to The New York Times. Frank White, the Republican who defeated Bill Clinton when he ran for re-election in 1980, continuously reminded Arkansans that his wife was “Mrs. Frank White.”

In light of her husband’s defeat, Hillary’s decision to go by “Hillary Clinton” was a way to gain favor with voters. According to The New York Times, when Bill ran for governor again in 1982, instead of Hillary Rodham next to him at the podium, it was Mrs. Bill Clinton. As Hillary recounts in her autobiography, Living History:

I learned the hard way that some voters in Arkansas were seriously offended by the fact that I kept my maiden name.

Following such a complicated trajectory, one thing is clear. Given that it is 2015, Hillary’s choice of what name she goes by (whether it’s “Hillary Clinton,” “Hillary Rodham Clinton,” “HRC,” or my personal favorite, “Hillz”) should be her prerogative. Goodness knows she’s earned it.

More like this
'Children of the Underground' Subject Faye Yager Now Runs A North Carolina B&B
By Brad Witter
Naomi Osaka & Emma Raducanu’s Experiences Have Inspired A New Amazon Show
By El Hunt
We’ve All Had Bad Sex. Nona Willis Aronowitz Is Talking About It.
By Sophia Benoit
It’s Official: 'The Bachelorette' Is No Longer A Fairy Tale
By Samantha Allen
Get Even More From Bustle — Sign Up For The Newsletter