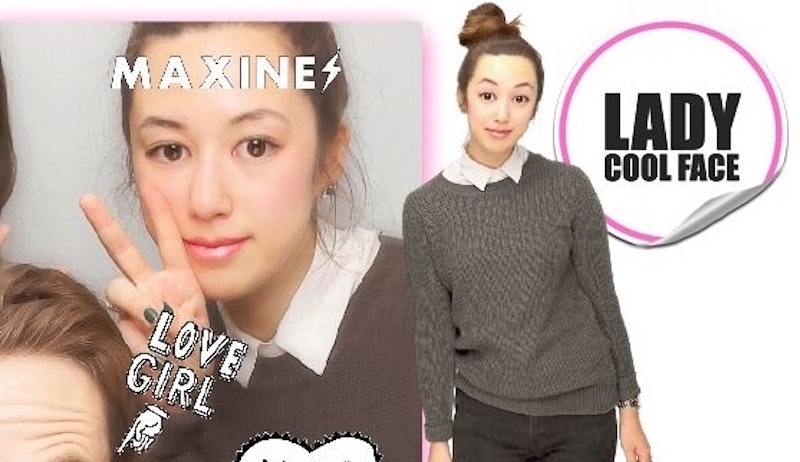 At this point in the game, we all kind of know that advertisements and magazine editorials are usually Photoshopped before going to print, but it's still a surprise when we realize people are retouching selfies before posting on Instagram or Facebook — something encouraged by Japanese Photo booths, or purikura.

With dozens of photo retouching apps available for smartphones, it really shouldn't be a shock. Anyone can take a selfie, poke a couple of buttons, and end up with a perfectly polished picture for social media. Your skin looks smooth and blemish-free. Your winged eyeliner is perfectly even. You can even top it off with a sticker of Hello Kitty eating an ice cream cone, if you're really getting into it.

A lot of these retouching apps have origins in Asia, where smartphones reign supreme. Japanese companies have been particularly innovative when it comes to these apps, many of which seem to be marketed toward women, like Decopic and Camely. I was first introduced to the trend when a friend told me to download the Japanese app LINE camera so I could edit my pictures with those neat Hello Kitty stickers I mentioned before. LINE camera's stickers also include different accessories and hairstyles and even tattoos to try out virtually, and the app allows the user to whiten and smooth skin with filters like "Healthy" or “Baby."

What I didn't know until I visited Tokyo last November was that these photo retouching apps have a real-life equivalent: purikura. The closest equivalent English word is "photo booth," but purikura machines are a far cry from the black-and-white photo booths you usually find in the back of your local dive bar. They're totally high-tech, often producing photo strips that have been automatically "beauty enhanced" that really put your retouched smartphone pictures to shame.

My boyfriend Luke and I first encountered purikura machines in Harajuku, that stylish neighborhood of Tokyo whose fashion sense Gwen Stefani totally ripped off in 2004 for her album Love. Angel. Music. Baby. The main strip of Harajuku is called Takeshita Street, and although it wasn't as colorful as Gwen Stefani's Harajuku Girls may have us believe, Luke and I were pretty overwhelmed by the swarms of people. Takeshita Street was a teenage girl's paradise, which I can say with confidence having once been a teenage girl myself. It was like Claire’s had turned Japanese and puked all over the road with kiosks of rainbow accessories and outlandish outfits and loud pop music blaring from every boutique and cafe.

We were lucky to have a wonderful guide through the madness: My friend Sari, who I actually met while doing a Korean language class in Seoul a few months before (because that's how globalization works these days). After walking a few blocks deeper into Takeshita Street, and an unsuccessful look into a lingerie store to procure a fleece onesie, Sari pointed to a basement store that was plastered with posters of beautiful, mostly male, J-pop and K-pop stars. She was having trouble explaining what was inside in English, but she assured us it was very Japanese and very fun, so we followed her down the steps.

We were immediately assaulted by even louder pop music than what was playing on the street. I had been expecting some sort of record store, but instead, we were surrounded by groups of teenage girls, all waiting in long lines that snaked in and out of these human-sized boxes. It took some navigating through the narrow aisles and peeking behind curtains to realize what was going on. Sari explained that these were purikura, or photo booths, and that she used to be one of these teenage girls getting dolled up in line to take her pictures with her friends. The longest lines were for the newest and hippest machines with the most innovative features. I wasn't sure what those new-fangled innovations in picture-taking could be, but I was pretty sure that we wanted to take some.

We found a machine with no line (which means it was probably the least hip of all the machines available but we were too overwhelmed to be picky and too curious to wait), put in some money, and squeezed into the booth, which was barely big enough for all three of us. There was a countdown, and the lights started flashing, and we started posing. The machine would sometimes tell us to move so that we could be better framed, but the whole thing was super quick. As soon as we were done, Sari rushed us to the other side of the booth, where we could draw on the pictures as they were displayed on a digital touchscreen. The final product was quickly e-mailed to me by the machine, as well as printed out on two relatively small strips of glossy photo paper.

As we walked back out into the street, we looked at the pictures in our hands and laughed about how much fun we had just had with our impromptu photoshoot. Looking at the photo strip, I easily spotted the photos we had drawn on and added stamps to, but it took me a little longer to see what other enhancements had been included automatically. The first detail I noticed was our skin. We were all glowing, with no sign of blemishes or redness except as blush on our cheeks. My eyes looked distinctly larger, and my eyelashes were darker and more defined, perhaps even longer. As a kid, I was always most self-conscious about my eyes because I felt their narrow shape was my most distinctly Asian feature, so it was strange to see myself with these huge, round Bambi eyes.

The transformation to Luke was perhaps most striking. “I make a really pretty lady,” he joked upon closer examination of the images. The glowing, blemish-erasing effect made his already pale skin turn an almost ghostly white. His already wide blue eyes became comically large, approaching cartoon character proportions.

The full-body shots were perhaps more confusing. There was a picture of my full-body on the bottom right of the strip, and I remember thinking how great my legs looked and complimenting myself on my secretly model-worthy posing skills. I then looked at the picture of Luke and I together and realized that neither of us was really that tall or lanky. In fact, the machine had automatically elongated our legs to make us look taller and thinner.

The addition of these retouching elements was not something we ever explicitly requested from the machine when taking or editing these photos. We didn’t click a button or choose an option for the added filters and enlarged eyes and longer legs. The idealization came standard. And that, to me, is what was most discomfiting about the whole purikura experience. My image was readjusted to conform to the beauty standards of the ideal Japanese woman — pale, glowing skin, with wide doe-eyes and a svelte physique. It’s a standard that prefers and idealizes the look of westerners, which is probably why Luke looked the goofiest of the three of us. He already looks like a westerner because he is a westerner, so the adjustments meant to correct my offending Asian features only enhanced his American ones to comic proportions.

Yes, it was fun to see how different I looked, and there’s something to be said about taking the whole experience at face value. But upon further reflection, it boggles my mind to think that gaggles of teenage girls were only seeing pictures of themselves through this artificially enhanced lens… and that they could also pass any of their own offending photos through the same filters and features using apps on their phones.

These retouched photos can reinforce a lot of unattainable beauty standards, and at their worst, they allow a person to hide what their real body looks like. These enhanced, retouched images are not real, which was surprisingly easy for me to forget. Plenty of people have expressed mixed feelings about using smartphone photo retouching apps, and I think these photos are most insidious when there’s nothing to compare it to and the real image can be entirely erased in favor of a fictionalized one. Without a side-by-side comparison, it took me longer than I’d like to admit to realize that I didn’t look the way the purikura machine made me look.

The experience in a purikura taught me both about Japanese beauty standards, and about the value of being able to see and judge yourself and your body for what it is, not what some computerized photo booth thinks it should be. As photo retouching apps become more popular here in the United States, it’s important to keep reality in mind, although, if we’re being honest, I wouldn’t mind having more purikura machines hanging around… but maybe without the automatic “beauty enhancements.”

More like this
Ashamed Of Your Screen Time Stats? Here's How To Change That
By Alexis Morillo
How To Turn Off TikTok Profile Views So You Can Stalk Other Accounts In Secret
By Alexis Morillo
This Wordle Rival Is Taking Social Media By Storm
By Sam Ramsden
Wait, Does Liking Someone's IG Story = Shooting Your Shot?
By Alexis Morillo
Get Even More From Bustle — Sign Up For The Newsletter
From hair trends to relationship advice, our daily newsletter has everything you need to sound like a person who’s on TikTok, even if you aren’t.