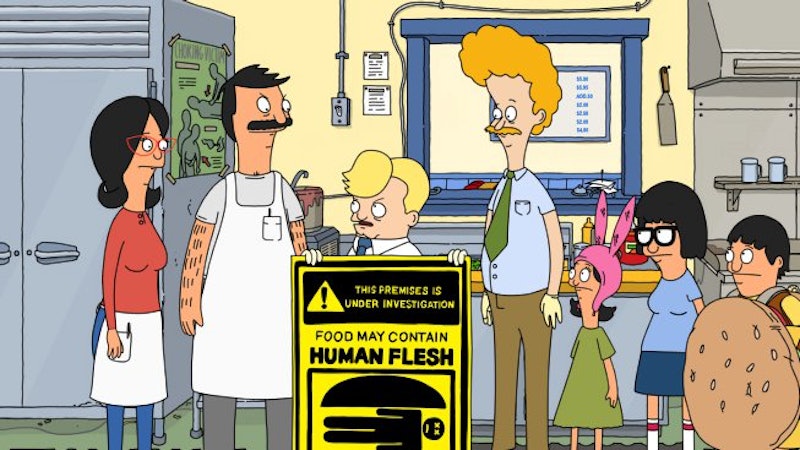 When I was in grad school, I'd often unwind after classes with my cohort by going to a friend's house near USC's campus, grabbing a cold one, and watching Bob's Burgers. At first, I had no idea what this wacky toon was, but by the fifth or six episode, I was in love. To this day, the Bob's Burgers pilot episode remains one of my favorite episodes of the show and one of the best pilot episodes I've ever seen. But since I haven't watched it in a long time (gasp), I thought it was time to rewatch and revisit the pilot of this Emmy-winning work of animated genius.

There's also a little known and fascinating fact about the pilot: Creator Loren Bouchard's original pilot presentation of the show featured Tina Belcher, the beloved eldest daughter and NPR-featured feminist icon, as a boy named Daniel. That's right, Tina was originally written and pitched to Fox as Bob and Linda Belcher's son. Daniel Belcher had all the same lines (his crotch is itchy, too), used the same voice actor (comedian Dan Mintz), and same colored shirt, but shorter hair, and, well, he's a mild-mannered boy.

"They originally picked me to play a boy - Gene and Louise's brother - but then changed the character to a girl after I was already cast," Mintz said in a recent Reddit AMA. "I was very skeptical but when they showed me an animation with my voice it somehow actually really worked with that character."

My favorite thing about the Bob's Burgers pilot, titled "Human Flesh," is that its jokes have endured since its debut in 2011. Here are five of the jokes that are still hilarious, still continue on the show, and still make the rounds on the internet in 2015.

The burger puns of Bob's Burgers have become a fixture on the show and have quite a following — there's a Tumblr that chronicles them weekly. But the one that has endured the most is Louise's prank burger "The Child Molester - Comes with Candy!" It's just so wrong yet so hilarious on so many levels.

Other Louise pranks have followed ("Foot Feta-ish Burger"), the pilot one is one of the most popular joke burgers in the history of the show. When I dressed up as Louise during Halloween one year, I carried around a whiteboard that carried the joke, you know, so people knew who I was if they didn't see my pink bunny ear hat. The Bob's Burgers Experiment is a Tumblr-soon-to-be-turned-cookbook that makes the real versions of Bob's chalkboard burgers and you better believe a real Child Molester burger was created (with candy).

Gene makes his first appearance on the show in his famous burger costume and failing at offering free samples outside the restaurant. While he doesn't wear the big burger as much as he used to, the costume has become his trademark.

Halloween costumes for Gene are basically sold as the giant burger, plus a plate of burgers. Just don't forget to carry your robot-fart-laser sound effects maker.

Well, it's more like "um" and it's a lot shorter than the "uhhhhhh" Tina moan fans have come to know and love, but it's the beginning of her character. And naturally, it comes after Tina's very awkward declaration, "My crotch is itchy." But that's the kind of candid honesty I've loved about Tina over the years; she truly isn't scared to be herself.

Later in the series, her pauses and "uhhhh" worried/indecisive moan would grow exponentially, as this supercut illustrates.

The Kids Are Terrible At Running The Restaurant

Fortunately, this hilarity continues throughout the series, and it even becomes the center of its own episode: Season 3's "The Kids Run The Restaurant," in which Louise convinces Tina to create an underground casino at Bob's Burgers. Wackiness ensues, of course.

Health Inspector Hugo Is In Love With Linda

The pilot isn't the last time viewers see Hugo Habercore, the Health Inspector who also once happened to be engaged to Linda and still carries a torch for her. He's gone on to make several more appearances on the show as Bob's antagonist. In Season 3, he notably quit being a health inspector to pursue a life of leisure on a nude beach. Luckily, he put his heath inspector clothes on by the end of the episode.

Sure, these jokes have endured throughout the run of Bob's Burgers, but the show has given fans so much more since then. And I can't wait to see what they come up with next.